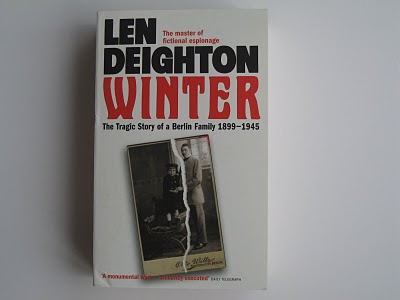 Courtesy of the kind folk at Harper Collins' publicity team, I've secured copies of the latest reissues from the Len Deighton catalogue. Berlin Game, Mexico Set and London Match will be reviewed subsequently on this blog; but first up, it's Winter: the tragic story of a Berlin family 1899-1945.

When this novel was first published in 1987, the world was a vastly different place. Berlin was split down the middle by the Berlin Wall and remained an island of liberty within a sea of Communism. Berlin in 1899 - when this novel begins - was vastly more different. The story Deighton developed in Winter used the experiences of the Winter family to explain the story of Berlin in the first half of the twentieth century. Nazism was a tragedy for the whole German nation; this book understands how that tragic inevitability played out in microcosm on one family. In this respect, it is a similar style of novel to Thomas Mann's Buddenbrooks, which brilliantly portrayed nineteenth century bourgeois Germany by examining the downfall of a bourgeois Lübeck family over four generations.

Crucially, Winter acts as a prelude to the first three Bernard Samson trilogy Game, Set & Match. Minor characters which are revealed in these novels as part of Bernard Samson's hinterland in the German capital - hotel owner Lisl Hennig, Bernard's boss Brett Rensselaer, and Bernard's father Brian Samson, whose decision to bring his family up in Berlin shaped forever his son's relationship with the city on the Spree - are given fulsome back-stories as part of this epic narrative. The quality of Deighton's writing and research is one of the reasons why in my opinion Winter explains as well as any history book why Nazism developed in response to Germany's experiences in World War One.

The new introduction
What comes across in Deighton's new introduction is the evident dedication with which he approached each new novel. In this case, the introduction recounts how he moved to Germany and Austria for over a year to ensure the authenticity of what he was writing. Fascinating stuff, too. Recounting an unexpected stop at a Bavarian Inn The Kramerhof during a snowstorm - which turned into a three-month stay researching life in small-town Germany - Deighton recounts how Winter was his attempt to write a novel about the 'real' Germany he'd known to love, one not corrupted by the popular culture clichés generated by recent historical experience:


"Winter was a biography of the Germany I had come to know over the years. We had lived in Vienna and in an Austrian village near Salzburg, which was now not all that far away, and my sons spoke strongly accented German. For many Germans, and many historians too, Germany and Austria do not have a separate existence. AJP Taylor, [Ed - noted British left-wing historian] who taught me so much about German history, persuaded me to consider both in unison and for that reason the story of Winter begins in Vienna. One of our neighbours in Riederau village had a son writing for a newspaper in Vienna. At my request, he rummaged through the archives to find out what the weather was like in Vienna 'on the final evening of the 1800s'. Now I had no excuse for delay."

To capture a sweep of German history from 1899 to 1945 on such a scale, Deighton decided early on to move from his favoured first-person narrative to the third person. The objective for what was to become essentially a family saga was to use each chapter to illuminate the key interactions between the characters in the novel to advance the narrative; as Deighton describes, in the same way that lightning briefly illuminates a long night of darkness.

Though starting his story in Vienna, Deighton chose not to write there, instead choosing Munich as his basis. It would become the third key city in the novel along with Berlin:


"The inhabitants of these three great German cities view each other with dispassionate superiority. While the mighty Austria-Hungary Empire dominated Europe, Vienna ruled. It was Bismarck, and the mighty Prussian armies that in 1870 marched into Paris, that displaced Vienna and established Berlin's ascendancy. At the turn of the century, Berlin's music hall got guaranteed laughs from jokes that depicted Bavarians and the Viennese as hopeless bumpkins. But Hitler changed all that. Hitler was an Austrian and his Nazi Party was born in Munich and when Hitler named that town as Haupstadt der Bewegung - 'capital of the movement' - all jokes about its citizens were hushed."

In following the fortunes of the Winter brothers Pauli and Peter across nearly half a century, these three cities shape their lives for good and ill. Deighton deftly uses historical events to advance the story lines for the two brothers, demonstrating how  individuals can be carried along by the consequences of major epochal shifts in history which change forever whole societies. The length of the novel, and the details in the dialogue and the narrative descriptions of each city, makes for a wonderfully absorbing tour through a nation imperceptibly taking small steps towards the cliff edge of historical oblivion.

The detailed research Deighton points to in this new introduction - such as lengthy interviews with a relative of Gehlen, 'one of the very few spies who influenced history' - marks out his worth as a writer who easily straddled fiction and history, and married them both to fantastic effect.

The new design
Designer Arnold Schwartzman cleverly portrays the essential storyline - of how the Winter family is split by the rise of the Nazi Party - through the image of a turn of the century photo of a father and son, torn in half. It also of course symbolises the subsequent division of the city after the War. Again, Schwartzman points to key elements in the narrative through ephemeral objects on the cover: early phonograph needles, a stamp with Hitler's image and postcards from the early flights of the Zeppelins.

Set against the clear white cover of the book, this visual language I think works really well in giving a compelling insight into what is an immense book. The title uses an interesting font, that draws to mind the sort of font used in early underground networks in Berlin and Paris. Works well, and is a departure from the other books.
Posted by Deighton Dossier at Sunday, May 30, 2010