Author Mike Ripley, creator of the Angel series of comic crime series novels is a friend of this blog who also edits the 'Getting Away with Murder' column at the influential Shot's website. He's also a friend of Len Deighton himself and reader of his works.

Like the Deighton Dossier, Shots has a separate blog - Shotsmag Confidential. Up on the blog recently Mike has written an appreciation of one of Len's ventures into the crime and 'what if?' fiction genres: SS-GB. This is the story about a Great Britain which has lost the Second World War and is under Nazi occupation. Mike's review highlights that such is Len's attention to detail, the reader asks less 'what if?' and more 'did that really happen?'

Check out the post here.
Posted by Deighton Dossier at Monday, August 27, 2012 2 comments: 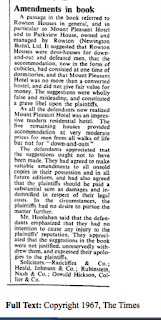 Books can be an expensive business, given the rate libel lawyers charge!
Posted by Deighton Dossier at Thursday, August 23, 2012 No comments:

Browsing around second-hand book shops can lead to the discovery of real treasure once in a while. It can also throw up something more intriguing.

This edition of Billion Dollar Brain is a bit of a mystery. I've seen plenty of different editions of this book, which has rarely if ever - along with the other 'Harry Palmer' novels - been out of print, but never one like this.

First off, it's a reprint from 1979, which isn't in itself unusual. Most reprints are paperback versions, so a hardback reprint - such as this - would often be for a particular reason or market. An anniversary, for example. That's not the case here. There are simply no clues as to the reason for the reprinting by Jonathan Cape, the company which produced the original version of the book with the Ray Hawkey-designed cover. I can't see the marketing angle for producing this style of book, fifteen years or so after the original came out.

The design for the slip cover is intriguing. A woman with a syringe in silhouette, within whose image is  an inverted image of a circuit board. This is repeated on the back cover too. Clearly, this is intended to evoke the image of the character of Anya, who provides the link for 'Harry' into the mysterious organisation run by General Midwinter.

There is no indication about who the designer is, which one often finds on hardback editions. It doesn't have the style of Ray Hawkey's work, nor any of the other designers which which Deighton's work is associated.

Does anyone have any idea who the designer is? And why was this edition produced in 1979? I'm curious more than anything about this find, which I've added to my already extensive collection and will file under 'not sure'.