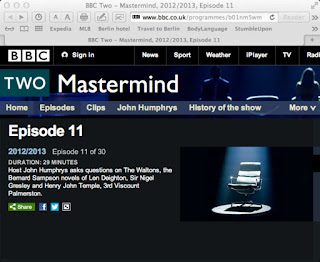 I'm due to meet up with Len this weekend for lunch and what should be an enjoyable chat about, well, all sorts of things.

Things I'm hoping to bring up are:


Feel free to post up questions you think need answering and I'll endeavour to ask them or, perhaps, I might ask Len if he'll do a third exclusive set of Q&As for the blog.

Update
Good discussion with Len over the weekend over a host of things, some of which I'll look to summarise on the blog soon. He agreed to do another Q&A taking on some of the questions which people have put up on the blog and the Facebook page. Hope to have that up here on the site soon.

Deighton Dossier reader Nick Flindall recently informed the blog that he had competed – rather successfully, it appears – on an edition of Mastermind in in 2008, sat in the famous black chair, under the spotlight, waiting for John Humphrys to ask the first question on his special subject. That topic? The Harry Palmer novels.

So, last month the Deighton Dossier asked him: how did it all happen? Nick takes up the story:

“I have just passed my seventieth birthday: I was probably in the first cohort of the public to make acquaintance with Len Deighton's early novels. I read The Ipcress File shortly after it’s publication in 1962 and quickly realized that Len’s novel was something very special. Its unique combination of acerbic wit, complex plotting, detailed research and superb grasp of dialogue, characterization and location made it stand out from the rest; Horse Under Water, Funeral in Berlin and Billion Dollar Brain were to follow. I loved all of them; these were books that I re-read at periodic intervals as the years passed and they have never lost their freshness for me, even to this day.

Some forty-five or so years later, in a moment of slightly tipsy, late-night on-line bravado, I completed an application form for the BBC’s long-running quiz programme ‘Mastermind’ and pressed ‘apply’. To my great surprise, I was asked for audition and subsequently selected to appear on the programme. My choice of special subject was, naturally, ‘The Harry Palmer novels of Len Deighton’. After a little deliberation and experimentation, this was the best title the BBC and I could arrive at: namely, the four novels mentioned previously, which I have always regarded as the true ‘Palmer’ novels.

In preparation for the programme I read and re-read the books, obtained the Silver Jubilee editions, scoured the internet, made assiduous and detailed notes and prepared my own ‘Deighton dossier’ which I still have - it was a labour of love. I never tired of the research and found very many hidden gems which had escaped me previously.

I was pleasantly surprised to score fifteen correct answers and one pass on these novels, which was the major factor in my winning that round and appearing later in the semi-finals (this time with less success and a different special subject!)

I had time on the programme for a relatively brief chat with John Humphrys before the general knowledge round, about my specialist subject. He seemed more interested in my earlier experience in the late ‘sixties as an accountant on a NATO project – the Cold War, spies expenses and all that! However we did progress later more directly to Len and the novels.

In the February of the year following transmission it was Len’s eightieth birthday and I sent an e-mail congratulating him on that milestone and mentioning my Mastermind appearance, adding how much I had admired the books over many years. His reaction was very generous and positive. I was thrilled and touched that he wrote back personally from the USA and later signed some mementos of the programme and other photographs.

I was proud to have appeared on the programme and to do well on the books that I have enjoyed so much. They are memories I will treasure. Subsequently, Rob’s Deighton Dossier website introduced me to Len’s many and varied other works, both earlier and later, and I have expanded my research into those areas. I’m very thankful to both and I hope many new readers will consume the novels as avidly as myself and with the same pleasure.”

Below is a transcript of the questions (the answers are provided on the main Deighton Dossier website). See how many you get right and see if you guess which was Nick’s “pass” question.