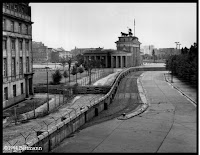 Berlin has always been for me a main character of the Game, Set & Match series of novels, important for understanding the dynamics of the Great Game played out on its streets and essential to understanding Bernard Samson's character. There's definitely something about the city that inspires a certain type of fiction - the Berliner Luft must definitely do something a writer.
Posted by Deighton Dossier at Thursday, May 17, 2012 1 comment:

Unfaithful to the story? The cover of Faith ...

Is there a fundamental error on the design of the new Harper reissue of Len Deighton's Faith?

One correspondent and blog reader - Sandipan Deb, an Indian journalist and Deighton fan - thinks so. He has pointed out to me an apparent mistake committed on the cover of Faith in the new edition published by Harper in 2011. The cover design is by Arnold Schwartzman, Deighton's friend and fellow designer.

"On the Faith cover, Schwartzman has used the photograph of a window in Poland with a lace curtain (and merged it with a picture of Bernard peering from behind it). In the cover designer's note, Schwartzman explains: 'As Bernard Samson is now on an assignment in Poland I searched through my collection of photographs for a suitable image that would evoke that part of the world...' The point is: Bernard goes to Poland in Hope, and not in Faith, which is set in Berlin and London!"

On first examination, something does seem to be amiss. The majority of the plot action in Faith takes place in East Germany, where Bernard Samson makes contact with the agent VERDI, who promises information that will explain the death of his wife's sister Tessa during Fiona's escape from the East when serving as a double agent in the KGB. It is in Hope that the story essentially shifts further west to Poland, as Bernard is forced to go there to extract Tessa's husband George - who is secretly working for Polish intelligence - who is in the country in the hope of being reunited with his wife, whom the Stasi have told George is still alive.

It does seem to be a discrepancy. Perhaps Schwartzman, in trying to find individual design elements for each of the nine stories while retaining a thematic integrity, overlooked this. Does it matter? Not really. What is as important about the source of the image is the idea it portrays - for net curtains, read Iron Curtain. Schwartzman's aim is to depict Samson behind the Wall, isolated, "an unwilling outsider ostracised from domestic comfort."

Whatever the motivations of the designer and the source of the image, the Harper reissues by Arnold Schwartzman are still iconic covers. The complexity and depth of the nine volume story is one of its attractions as fiction, as it requires the reader to become fully absorbed in the main stories which flow between each of the books.

Still, an interesting observation.
Posted by Deighton Dossier at Saturday, May 12, 2012 No comments:

When I last chatted with Len, he indicated that he was still writing everyday. While the hope remains that he'll re-discover the spark and turn that writing energy into a new thriller - perhaps Bernard and Fiona's life post-Wall - when any new writing by Len does appear it is often in small, self-contained projects that pique his interest.

One such project is a new limited edition book by Baseline Magazine, a company and website devoted to design, and in particular type design. In What's cooking? Famous designers on food, the publishers have invited over 40 of the world's leading designers and type creators to talk about how food influences their approach to design. As it says in the introduction by the magazine's Veronika Reichart, in the case of Len Deighton: "he taught spectacle-wearing Michael Caine to cook in the Ipcress File movie. Is there more to be learned about food than meets the eye? Len will give us a cooking lesson."

That lesson is about the perfect lasagne. Going back to his roots in the fifties and sixties as one of the UK's top young graphic designers, Len illustrates his missive on pasta with new illustrations which follow the classic designs from his famous Action Cook Book, which also featured in Ipcress File.

According to Len, for the best lasagne:

"Steam is the most important desirable constituent. In the case of lasagne I was made aware of this in the winter of 1977 when despite the cold weather I tried to avoid having a pasta course in my dinner at Sabatini, a Michelin two-star restaurant in Florence. Sabatini's head waiter claimed that the lasagne on the menu was a light dish. Since avoiding a pasta course in Italy is a capital offence I yielded. He was correct and it transformed my life; or at least it improved my cooking. The head waiter explained how cooked lasagne sheets arranged in wavy layers traps air, makes steam and thus makes a heavy dish into a light one."

Len goes on to provide a recipe that ensures your next lasagne will be light as a feather. It's an interesting chapter, a mixture of writing and design, and harks back to his earlier books on food and cooking.

Also included in the book is an entry from Len's friend - and designer of the recently re-released books from Harper Collin - Arnold Schwartzman. He talk about the memories linking ice cream and the cinema, and provides a recipe for the perfect ice cream.

The book retails at £15, and is available from the Baseline website.
Posted by Deighton Dossier at Sunday, May 06, 2012 No comments: