Relax in your favourite armchair and read a Romantic story ...

Is Harry Palmer a Romantic hero? A Romantic with a capital 'R', a part of the literary tradition of Rousseau and Wordsworth?

Well, that wasn't my first reaction when reading the novels, but it was what Fred Erisman read into his reading of Deighton's first six novels. And he shared this idea with other fans in the April 1977 edition of Armchair Detective.

I'd never seen a copy of this American magazine, but I made a serendipitous find on, where else, eBay! The Armchair Detective was a quarterly journal devoted to the appreciation of mystery, detective and suspense fiction. I write 'was', as it's now longer a going concern, having grown from simple fanzine produced on a mimeograph (Ed - there's one for the teenagers!) to a quarterly journal matching in quality the output of many of the more established literary papers. And then, sadly, gone. The reviews are scholarly, intensely researched and backed up by references (as this article is) and often - as in the case of the front cover - innovative in design.

Now, of course, fans of any genre of fiction or the arts are connected by the Internet, and everyone's a critic and a reviewer - we're spoilt for choice. This blog for example is a true antecedent of the cut-and-paste efforts of yesteryear and supports the tradition in the digital age.

Back to the article. Erisman's initial thesis approaching Deighton's novels is interesting: the spy as 'romantic', linked to the ideal of Romantic thought derived from Rousseau and Wordsworth. His thoughts are personal, intellectual, and he displays emotional individualism. He acts from personal principle rather than from expediency.

The first six novels, Erisman writes: "convey a sense of the aimless intricacy of an intrigue-ridden society, pervaded by obscurity and betryal." Within this world, the unnamed spy (Palmer) is, he says, "Deighton's answer to the problems posed to the individual by contemporary life." This is a spy seeking personal satisfaction and freedom, while doing his job; he is dissatisfied with the world. Palmer, Erisman guesses, is "a Thoureauvian questing after inward reality in a twentieth-century setting." That's a deep analysis one rarely sees in connection with Deighton's novels. The writer goes on to critically deconstruct Deighton's texts, looking at notions of friendship, love and deception within the novels and for the most part, what he presents are ways of viewing the characters that I for one hadn't considered before.

He quotes a lovely perspective by another critic, James D'Anna on how the character epitomised the moral duplicity and uncertainty at the heart of the Cold War:

"the dominant colour of the Cold War is neither black nor white, but grey ... the issues in the East-West conflict are as blurred as a defective television tube."

Overall, this review provides something new by placing Deighton's hero within the pantheon of Romantic heros. One wonder if that was what Len had at the back of his mind when he developed the character?

The cover design was at first a puzzle for me as I wrote on this blog. As eagle-eyed readers have commented - and thanks for their input - the car is a Jensen, and therefore it's clearly a reference to a line by Harvey Newbegin, 'Harry Palmer's' old spy pal in Billion-Dollar Brain, on the day the former met the latter:


'The first time I ever saw him was in Frankfurt. He was sitting in a new white Jensen sports car covered in mud, with a sensational blond, sensational. He was wearing very old clothes, smoking a Gauloises cigarette and listening to Beethoven on the car radio and I thought, "Oh boy, just how many ways can you be a snob simultaneously".'

I didn't spot it, as it's been a while since I've read Billion-Dollar Brain all the way through, and the image didn't look much like Frankfurt, but that clearly seems to be the reference and I should have spotted it. My bad! Well done to the blog readers who pointed out my error

Old-school cuisine ... at a pinch!

Instant whip was always a handful to whisk and you never got it completely smooth, a residue of sickly powder laying at the bottom of the dish. Such was the state of cooking in the sixties.

The Independent's Gerard Gilbert cites this out-of-a-packet pudding as one of the great milestones of cooking in the sixties. Is Instant Whip the nadir of home-spun cooking or the start of the foodie revolution which transformed Britons' eating habits and led us directly to Jamie Oliver and Ready Steady Cook? Gilbert talks to Valentine Warner, the star of a new TV series Eat the Sixties, to answer that very question.

Warner turns to one of the great cookbooks of the sixties to argue that Britain's palate was changing for the better, and Chicken Kievs and Smash instant potato were merely the culinary foothills of a long slog up Mount Cuisine:


'Valentine Warner is knocking on my front door with the ingredients for chicken kiev and prawn and avocado cocktail, as well as a copy of Len Deighton's Action Cook Book. The spy novelist who gave us Harry Palmer was also an enthusiastic chef who wrote a newspaper recipe column throughout the Sixties. "This is actually a really good little cookbook," says Warner, showing me the cover of a man ladling spaghetti from a saucepan as a girlfriend encouragingly tousles his hair from behind (this is the 2008 reprint – knowingly sexist). "There were more men left to their own devices to get on with it... the bachelor in the kitchen."'

Great nostalgic stirrings reading this article. As a child, Instant Whip was a super treat, for which a whisk a procured and much furious beating and stirring later I was eating the sickliest, treacliest .... tastiest pudding around.
Posted by Deighton Dossier at Saturday, October 08, 2011 No comments: 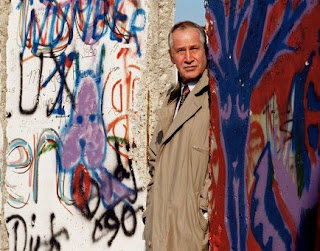