On behalf of readers and fans of his work, the Deighton Dossier - set up to bring those people together online to celebrate and discuss Len Deighton's books - would like to wish the author a happy 89th birthday.

While long in retirement, and enjoying retirement with his family, children and numerous grandchildren, Deighton's influence on fiction and spy fiction in particular, still resonates. Every so often, one reads about one author or another being dubbed 'the new Deighton'. That's a great testament to the quality of the author's impact. 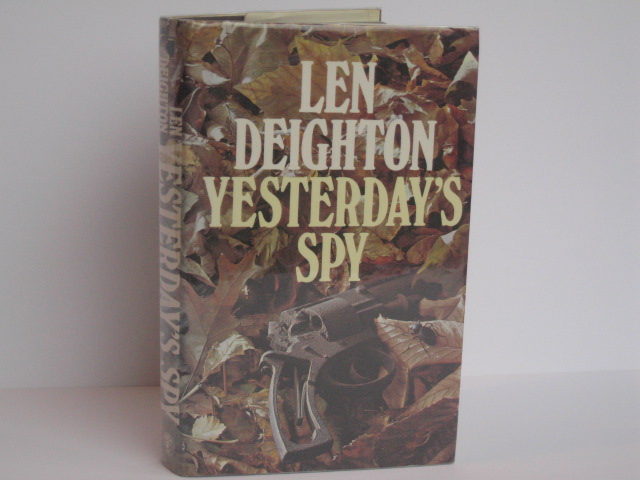 As readers of this blog may know, the Spybrary podcast by fellow Deighton fan and friend of the Deighton Dossier Shane Waley is pulling up trees in the world of podcasting and is now, arguably, the best podcast for all things spy fiction.

This week, he's added the thirty-third podcast, a 10-minute 'brush pass' episode looking at Deighton's Yesterday's Spy novel from 1975. His fellow spybrarian on the podcast is the author of the 'Agent Palmer' blog, the pseudonymous Agent Palmer himself.

If you've not yet read this book, one of his 'non-Palmer' novels from the seventies, this is a good introduction.
Posted by Deighton Dossier at Saturday, February 17, 2018 No comments:

The first edition is the ultimata ratio of any book collector, the Holy Grail of the bibliophile. But there is also gold in the unusual and lesser known.

This blog post was prompted by an email from a Dutch Deighton fan and collector, Henk Konings, who sent me the image of his Companion Club Edition An Expensive Place to Die, above. It got me thinking - are they, and other unusual imprints or later editions, as important as the first editions to a collector? Or are they just sprinkles on an otherwise delicious cake?

As a long-standing collector of Len Deighton's works (alongside the works of Spike Milligan), I've always had uppermost in my mind the need, the challenge of completism, to be able to track down and secure (for as little money as possible) a copy of every book in its UK first edition format (and often, too, the US and German first editions).

Over years of collecting it's generally been relatively easy to do as, maybe until the last five to ten years, Len Deighton's first editions - with a couple of exceptions - have been both competitively priced - as against, say, John Le Carré or Ian Fleming first editions - and relatively available on the market and in second-hand bookshops.

Sure, one or two editions - and I'm thinking of when I finally picked up my pristine Billion Dollar Brain first - have required some tracking down and financial outlay. But it's been an achievable challenge such that relatively early in my collecting career, I had got most of the first editions lined up on my shelves.

As a fan first - but also a collector - my thought was then: what next? That's when I started on the next phase of my collecting, when I started to actively track down special editions, book club reproductions and other oddities which the purist, perhaps, might overlook.

Why? Well, based on my collection - and, judging from Henk's email, others' too - these special editions can be just as fulfilling to track down and interesting to consider as the first editions in terms of book design, style and illustration than the first editions, if not more so in some cases. First editions are ultimately about rarity and first impressions. When you don't have rarity, an alternative edition has to offer something else.

Book of the month

From my own collecting, online hunting and correspondence with other collectors, there are plenty of readers who like to focus on book club editions, such as the ubiquitous Book of the Month Club or the slightly more urbane Franklin Book Club special editions, as a collecting goal in themselves.