That's Sean Connery, of course, who's 85th birthday is on 25 August. Great actor as Bond but also in so many other films that are too numerous to mention. Here's a nice summary on the BBC website of his career and how he moved on from the 007 character to star in some great roles.

The Bond blogs and discussion forums will I'm sure be alive with debates about whether he's the best Bond or not.
Posted by Deighton Dossier at Monday, August 24, 2015 1 comment:

News from the film world about the planned SS:GB film production, being written by Bond writers Neil Purvis and Robert Wade.

Actor Sam Riley is in talks to become the lead character in the upcoming film adaptation of SS:GB, playing British cop Douglas Archer, in this much anticipated BBC-backed film. This article in Deadline, the movie industry magazine, confirms that German director Philipp Kadelbach is on board to direct.

Food for thought: Deighton on Radio 4 in August 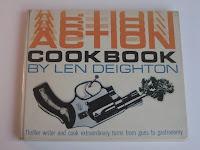 When last in London, Len Deighton recorded an interview with Radio 4, which will be broadcast at 1230h on 9 August.

The theme is food heroes. Presenter Tim Hayward examines Deighton's qualities for this heroic role by looking at the way he changed people's understanding of food and cooking in the 'sixties through his Action Cookbook, and the wider influence food has had on his life, from his time as a pastry chef in a London hotel through to the present day.

You can access the programme online here, after the original broadcast next week.
Posted by Deighton Dossier at Monday, August 03, 2015 1 comment: