I re-read SS-GB when I heard the news of a possible TV version. Over the years I’ve read long passages from SS-GB out to friends as I’ve tried to share with them my love for this tense and moving book. It was no chore to pick it up again.

Len Deighton, in his memoir relating to James Bond and film making (James Bond, my long and eventful search for his father) remarks on how the film director can build the tension by revealing things that the hero cannot know. In historical fiction the reader can have superior knowledge to the protagonists. In SS-GB Len exploites the reader’s knowledge of the atomic bomb and how it will fundamentally change warfare. At times Kellerman and Mayhew seem to be negotiating over the atomic secrets as though the atomic bomb were just some new type of hand grenade. The reader knows, as they cannot know, what an atomic bomb means.

The tension thus generated keeps the reader engaged throughout. In fiction there are three legs, world, character and plot. In a sense the plot and characters are only there to keep you turning the pages while you visit the world the writer has created. And so we stick with Douglas avidly as he makes his way through the horrific world of a German occupied London.

EXCLUSIVE - Len Deighton on the true story of the production of Oh! What a Lovely War

In a coup for the Deighton Dossier, Len Deighton has written a personal and detailed account of his production of the award-winning UK film Oh! What a Lovely War. In this century anniversary of the start of the First World War a lot of focus has been placed on this film with its portrayal, through the music hall style of the original play, of the realities of war for many on the front.

Len has indicated to me that in response to some 'extravagant fictions' that have grown up around the film since its release, he would like to set the record straight and explain the reasons why he chose to make the film and tell the story of the men and the war.

Producing 'Oh What A Lovely War' - how it happened

When Charles Chilton created 'The Long Long Trail,’ his musical play for BBC radio, he used only the words that were spoken or written by the participants of World War One. The programme was entertaining but it was an important record too. In a typically British light-hearted way, it brought the facts, figures and first-hand opinions of the war to a wide audience.

On 19 March 1963, Joan Littlewood and her Theatre Workshop opened their production. Joan had transformed the radio programme into a musical entertainment for the stage. Her Theatre Royal was a lovely old music hall and Joan's instinct told her to adapt a line from one of the songs - 'Oh, its a lovely war' - to make her more exclamatory title ‘Oh What A Lovely War'. Joan's production adopted the variety theatre format, and even used the illuminated numbers at each side of the stage to distinguish each act. The Theatre Royal was small and the audience was mostly local people, but the heavy irony of Joan's new title attracted wide attention. Theatre critics, always curious about Joan's startling and unpredictable talent, came to Stratford in London to see what it was all about. Kenneth Tynan, the theatre critic of The Observer, gave the show a rave review. I read his verdict a day or two later, in Portugal. The production was obviously an important historical record and I made plans to go to London and see it. I went to London, saw the show and bought the LP recording of the songs and music.

After seeing Joan's Theatre Workshop production at Stratford East the show remained in my mind, and I had played the songs over and over again. I bought a published copy of the stage play to see if I could make it into a screenplay. Harry Saltzman warned me that other admirers of the show had bought movie options previously, but failed to get deals; but I persevered. My determination was driven more by the wish to make a permanent record of the show than by a wish to become a film producer...."

Read the rest of this story on the newly upgraded Deighton Dossier website.

over the last few days I've been busy re-building the main Deighton Dossier website from scratch, including all the original content but adding in more content too and updating some imperfections in the site.

In this mobile age, the site is (I hope) now fully responsive meaning it can be accessed on a phone, table or PC. Also, the design is such that it will now be easier for me to include more galleries, potentially some video and other interesting stuff that I've not been able to put up now. 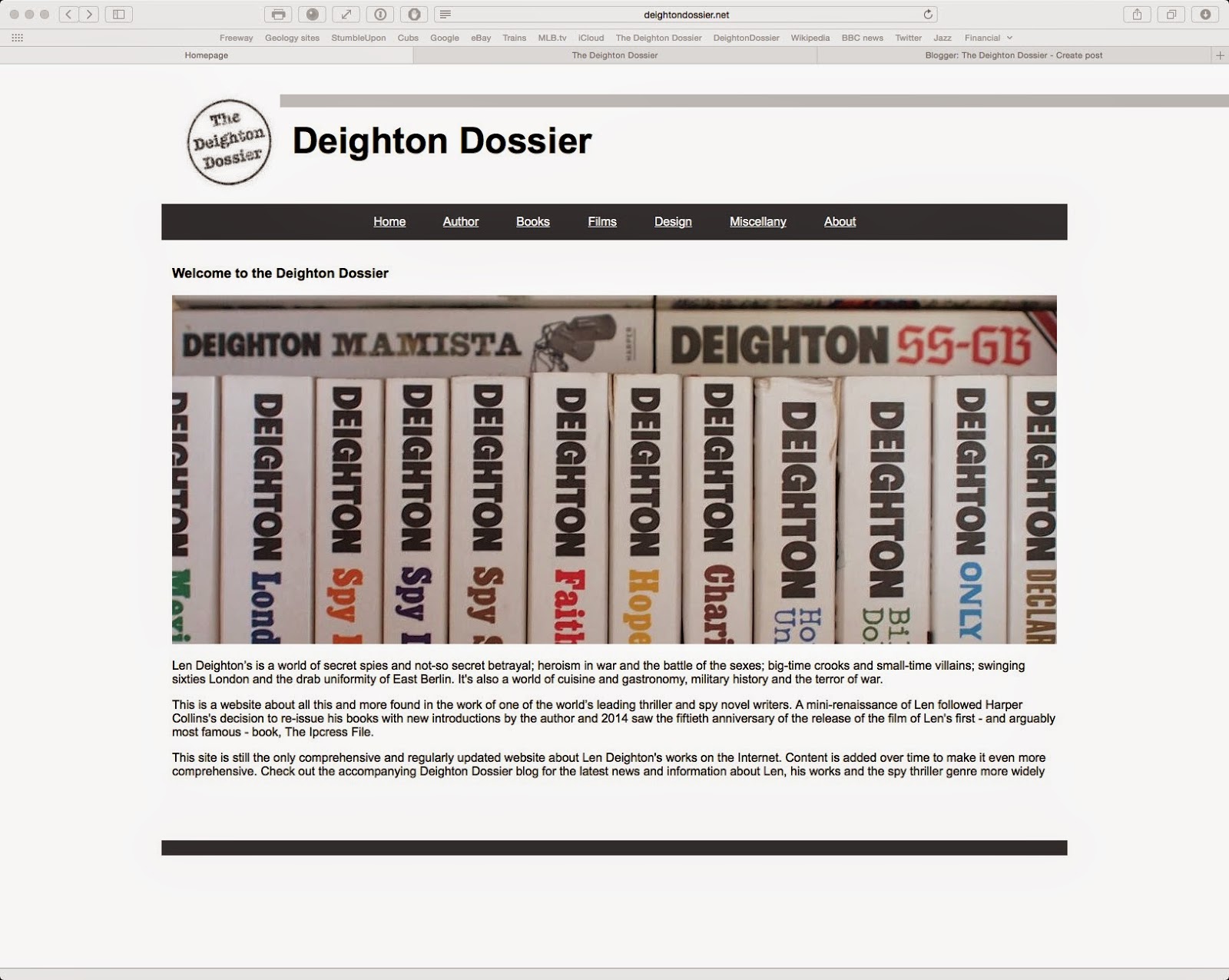 At some point soon I will also be upgrading the blogger template on blogger.com so it more closely resembles this upgraded site.

Anyway, hope readers like it. If there are errors or things not on there that should be, please send me an email and I'll correct them. If readers have any interesting books or other pieces from their collections which they think should be feature on here (appropriately referenced), do get in touch.

The content itself has been edited slightly, but with this new content structure in place I hope to do a further refresh on all the written content and add some new commentary and analysis, re-using some of the information readers have provided on the blog.

Enjoy!
Posted by Deighton Dossier at Monday, November 24, 2014 No comments:

SS-GB closer to the screen?

According to this report in Variety magazine, the BBC has signed an agreement with Sid Gentle films to adapt SS-GB into a five-part, BBC One thriller.

Reportedly at the helm are two writers from the recent Bond adaptations, which is a sign of the probable quality of any screenplay and of the likelihood of the reasonably advanced progress already made on this adaptation. With what can be achieved through CGI in re-creating long-lost London, this should be worth watching.

Indeed, there remains no further substantive news of the other major Deighton story adaptation, that of the Game, Set and Match triple trilogy by Clerkenwell Films, announced just under a year ago.

Users will see that I've changed the blogger template for this blog so that it now resembles more in character the main Deighton Dossier website/archive.

It was twenty-five years ago today, Gunther Schabowski allowed exit visas without delay ....

Today is the twenty-fifth anniversary of die Wende - the fall of the Berlin Wall and the ending (until this year, maybe) of the Cold War between communist Russia and its satellites and the West. SED central committee spokesman Gunther Schabowski, announced changes that would allow GDR citizens to apply for visas to travel aboard, "immediate, without delay". The latter sentence was the key - there were no plans in place by the SED for immediate travel, but Berliners weren't worried and streamed across the border after demanding gates were opened

Europe has changed so much since then that it's easy to forget the continent was utterly divided by an barbed wire and concrete barrier, separating German from German.

It is the leitmotif running through much of the best Cold War fiction and continues to fascinate as history and fiction.

In Berlin Game, Len described it I thought very well:


"Spiked through both sectors, like a skewer through a shish kebab, ... the East-West Axis"

Up on the Telegraph's website today, timed to coincide with the anniversary of the fall of the Berlin Wall over the weekend, is an interesting little feature: the top ten Cold War novels.

Like all these lists - not really the most imaginative approach from the journalist, Jake Kerridge - there's no definitive answer and that creates often some great postings in the comments section where fans of different authors argue over which deserve their place and which not.

Len's work Billion Dollar Brain is Kerridge's surprise choice (surprise for me in that, most journalists will often pick Funeral in Berlin or The Ipcress File from this series). There are some other well-deserved choices but, as some commentators remark, where is Tinker, Tailor, Soldier, Spy?

It's all very subjective, and I guess that's part of the fun. So ..... what would you change?
Posted by Deighton Dossier at Friday, November 07, 2014 3 comments: