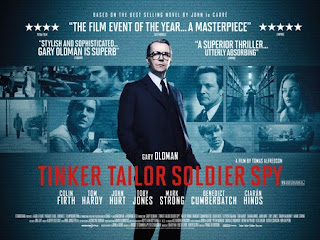 Not bad, as a starter for ten. But are they in the right order?
Posted by Deighton Dossier at Thursday, September 15, 2011 1 comment:

A very interesting article in today's Daily Telegraph by Toby Clements, who seeks the source of the current upsurge in interest in John Le Carré.

Entitled 'Tinker, Tailor, Soldier, Spy: A love letter to John Le Carré', Clements aims to establish what it is that makes John Le Carré's stories fresh and accessible to a modern audience, through the new film starring Gary Oldman as George Smiley.

Clements alights on ambiguity as the secret to this sustained time on the literary stage, with no signs yet as the author approaches eighties of slipping off into the wings. The ambiguity is in the characters - Smiley is anything but the obvious spy, for example: cuckolded, respectful to some extent of his opposite number, his morality is not clear cut, nor are his relationships with the people and the operation of the Circus.

The ambiguity is also in Le Carré as an author, and in his writing, where Clements writes that he challenges the reader to treat the prose rather like a case officer: what's important, what's between the lines, what is noteworthy? The author's own background, and the blurring of his career as a spook with his life writing about them, also adds to this feeling of the "morally ambigious" in all his works.

His last comment is noteworthy: "Len Deighton and Alistair MacLean can only be read ironically". Hidebound by history, he suggests, these authors are no longer 'relevant' in a way that Le Carré is, and offer the reader only curiosity. The modern audience cannot effectively tune in, and reads them only to remember nostalgically how things were. His suggestion that modern audiences are drawn to the drab greys and shabbiness of seventies London in the film is telling.

But then, applying this criteria to other historical and spy fiction novelists - Fleming, Ambler, Greene - that gap between the then and the now is always going to be widened year on year as the world moves on. But if the story, the characters and the plots have real value and sustainability, they can survive the march of history.

And of course, this upsurge in discussion about Le Carré is driven by the inexorable push of the media marketing machine that is Hollywood. Were Tarantino to make good on his promise to film Game, Set and Match; or Ridley Scott, perhaps, to update the Thirty-Nine Steps, then we might see similar media debate about Deighton and Buchan.
Posted by Deighton Dossier at Saturday, September 10, 2011 No comments:

It's official. The world has had enough of the war on terror and the war in Libya: everyone's nostalgic for the Cold War. Well, judging by the ubiquity of George Smiley and the new film version of Tinker, Tailor, Soldier, Spy in the media and online, the Cold War is back, back, back. It's like it's never gone. This most famous of Cold War spy thrillers is even being referred to on the comment pages of our national newspapers, a sure sign that a cultural phenomenon is emerging.

Gary Oldman's portrayal of the taciturn and morally ambiguous spy-hunter is everywhere this week as reviewers return from the screening sessions for the new movie and file their copy. And they're in universal agreement: the film's a cracker. Numerous reviews all point to Oldman's George Smiley as worthy of an Oscar. Derek Malcolm in the Evening Standard highlights Oldman's portrayal as more "introspective and less knowable" than Guinness' version; Time Out's Dave Calhoun's picks out the film's seventies verisimilitude; The Guardian's Xan Brooks talks of a director - Tomas Alfredson - who's more fascinated with the detail than the denouement, the journey rather than the destination; the Daily Telegraph's David Gritten writes that the film is simply a "triumph".

Consequently, lips are being licked by every spy fiction fan across the globe. Pub bores will also soon start regaling those who'll listen with their opinion that "it won't be as good as Alec Guiness's version". Judging from the new trailers, pub bores up and down the land will have to be buying a few pints by way of apology It looks very, very good.


What comes across from the trailers and the reviews is the pace. Or lack thereof. This is a slow - apparently, at times, slightly ponderous movie. It is the antithesis of the fast-paced, whizz bang crash of the 007 and Bourne spy movies which, since the fall of the Berlin Wall, have largely been Hollywood's staple of this genre. Here is a film which, in the way it apparently winds up the tension and the uncertainty, successfully mirrors the book it portrays.

All the reviews refer to Guinness and the seminal BBC TV series; I've yet to find a review that doesn't. This begs the question can a film maker really ever escape the artistic visions of those who've trodden a familiar path before, particularly when many feel the mould should have been broken after the first pot? The verdict seems to be yes.

That's perhaps surprising because the movie industry - particularly Hollywood - has a long-track record in getting re-makes of much-loved British film and TV spectacularly wrong: Sylvester Stallone in Get Carter. No further questions, m'lud! Having a Swedish director, perhaps, seems to be the key; Tomas Alfredson is schooled in the European school of pathos, character, drama and subtlety.

So. A much-loved British spy novel from a generation ago, with an instantly identifiable central character, previously filmed, and seared into our collective cultural memory, emerges onto the global stage in a remake.

I've no doubt that given the expected success of TTSP - with Oscar's already being polished, judging by all the online and offline comment - in some Hollywood office a producer is already asking the question: "what about The Ipcress File, huh?"

What about it, indeed. One word: unthinkable.

However, might that same cigar-smoking producer (one always assumes producers smoke, somehow) not also conceivably ask the question ..... "what about Game, Set and Match?"