Spies duke it out in a no-holds-barred contest 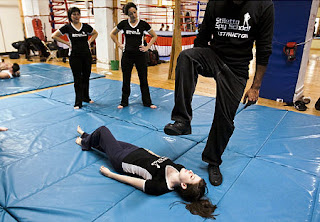 Do you ever experience those moments when you think: "Damn. That's a great idea. I should have done that."

This is one of those moments. Armstrong Sabian over at the Mister 8 blog is starting is Mister 8 May Madness contest, in which top characters from spy fiction over the ages fight it out for the title of top spy. Think WWE only with Glocks and wittier repartee.

As Armstrong says on his blog:

"For those unfamiliar with tournaments bearing the moniker of Madness, the idea is simple: you take 16 teams, rank them, arrange them in a tournament bracket, and have them play against each other until one is crowned champion of them all.

Instead of sports teams here at Mister 8, we’ll be featuring secret agents! But wait, you say, James Bond can’t play basketball! How will we determine the winner of these tournaments? That’s where you come in, dear reader. For each match-up, I’ll be posting a profile of each super spy, and a poll for you all to determine the winner. Voting will remain open until the day before the winner has to “play” in their next “game.”

Call for cheerleaders: I’m also interested in soliciting reasons why readers should cast their vote for each secret agent, and would be glad to run those testimonials alongside the profiles on the day of voting.

Should you vote for your favorite? The superspy you’d want on your side when the world is in peril? The secret agent you think most personifies the genre? Your reasons for voting are up to you!"

Below are the match-ups and dates for the first round of the tournament:

Jason Bourne (Ludlum hero in need of a steadicam) v. Cate Archer (UNITY’s best hope, but No One Lives Forever)

John Drake (Game 6, seed 6…trying to tell us something, Danger Man?) v. George Smiley (the Spy Who Sent Back Out the Spy Who Came in From the Cold)

Jack Bauer (voting in this game may only last 24 hours…) v. Jim Phelps & The IMF (…or maybe only five seconds until it self-destructs!)