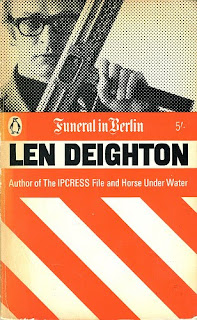 I've just got hold of two pristine copies of the Penguin first editions of Billion Dollar Brain and Funeral in Berlin. These are the famous editions with Michael Caine as Harry Palmer on the front, brandishing a Sten Gun (Deighton brandishes on the back of Billion Dollar Brain too), with a colour chevron design by Deighton's great friend Raymond Hawkey.
As well as these books being design classics, they contain on the back and on the inside covers some fantastically florid quotes which sum up the sixties era of cultural and economic optimism at a time when the Cold War was paradoxically getting rather hot! Here are some great examples:
Funeral in Berlin
"A ferociously cool fable even better than The Spy Who Came in from the Cold". New York Times
"Next, big soft girls will read Len Deighton aloud in jazz workshops". Life (this one is definitely from the sixties!)
"The Raymond Chandler of the cloak-and-dagger set". San Francisco Chronicle
"The best yet... It would be an interesting exercise to itemise all the information (true and false) that Deighton manages to pack so effortlessly into his books. It will be a long time before one tires of this cynical hero who can unravel more varying situations and sew them up into an acceptable solution than anyone in the overcrowded spy writing profession." Books and Bookmen
"Absolutely perfect - suspenseful, intricate and coldly logical." Ogden Nash (US poet known for his light verse, for UK readers!)
Billion Dollar Brain
"Mr Deighton is really a poet of the spy story, fascinated by the way things work - not just poison needles and fountain pen signals, but the details of communication systems, the origins of virus growths. This book puts him with John Le Carré, so far in front of other writers in the field of the pure spy fiction thriller that they are not even in sight." Julian Symons, The Sunday Times (Symons was a British crime writer and former president of the Detection Club. He died in 1994)
"Why does a thriller writer like Len Deighton achieve such credibility, such accurate line-by-line beaming of a sheer sense of the actual, with his preposterous spy-yarn? Confidence is revealed not least by the tone of voice: a random example from his new glittering wintry entertainment is where he writes about "the sort of snow that a sharp PR man would make available to journalists", which seems a brilliant contemporary way of saying deep and crisp and even." Norman Shrapnel (!), The Guardian
"[the novel] Moves like a jetliner and hits the mood of the Sixties with deadly accuracy." Alan Forrest, Sunday Citizen
Posted by Deighton Dossier at Tuesday, September 08, 2009