Like The Professionals with submarines: Lindsay Shonteff's Spy Story film 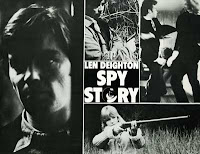 I've just found online two websites created in tribute to the late film director Lindsay Shonteff, who died in 2006. The first is a general primer to his career as a (not altogether successful) film director of what would now be termed 'straight to DVD' movies; the second is a commercial site run by - one assumes - his son or daughter, where all his movies are available to download in .divx format for a small price.
Why this interest in an obscure Canadian filmsman? Well, because he was the - surprising, given his record - director chosen for the film adaptation of Len Deighton's Spy Story, often regarded as the fifth in the 'Spy with no name' series of films, starting with The Ipcress File in the sixties; however, despite the similarities in the characters - and the lack of definitive statements either way - it's clear that 'Patrick Armstrong' is not 'Harry Palmer'. Deighton describes him as a "close relative", presumably metaphorical. This film has never been made available on DVD in the UK before; indeed, my only copy is a Betamax tape! That's how rare - how unpopular - this adaptation was.
The lead character, Patrick Armstrong, is no longer at W.O.O.C.(P) but at the Studies Centre with his pal Ferdy Foxwell, programming war simulations and running them to test NATO strategies. He is forced to work with his new, abrasive american boss Colonel Schlegel. Upon finding his flat has been ransacked, and photos with his face replaced by another man's left behind, he starts to untangle a web of intrigue that takes him north to Scotland, where a group of conspirators is arranging the defection of leading Soviet general Remoziva, with the secret aim of ultimately discrediting him, as his sister is leading efforts to reunite a divided Germany.
The book has a complex plot which is challenging to follow at the best of times, and this is amplified in the movie treatment where little time is given to character development and plot twists are introduced with little explanation or effective joining of the different elements. Under Shonteff's direction, gone is the stylish shot design of the Harry Palmer movies directed by Sidney Furie and Guy Hamilton, with the sumptuous backdrops and stylish composition of the frame around Caine's character. Here, it's a lot of dreary (cheap to film) shots of London and the Scottish countryside, shot at a fast action pace with little real dramatic tension built in.
The acting is pretty ropy, let's be honest: Michael Petrovich as Patrick Armstrong is more Timothy Dalton than Daniel Craig; Don Fellows as Colonel Schlegel hams it up, and Philip Latham's portray of Ferdy Foxwell is notable for little other than an excellent pair of sideburns. My goodness, even TV's very own Nicholas Parsons steps into the picture, signifying instantly that this is now big-budget Hollywood adaptation; more a cheap and cheerful London effort.
But, it is a serviceable film and pretty faithful to the book; watching it again tonight, I discovered a certain surprising charm to it. The lack of a real budget - perhaps leading to its subsequent poor show at the box office - is shown up in the lack of impressive location, special effects and multi-camera shots. There are instead a lot of simple panning shots up and down busy London streets. It has the feel of an episode of The Professionals, shown in a made-for-TV film format which lacks a lot of the depth and detail of a properly cinematic format. It does capture well in seventies colour (or lack thereof) the grubby, shabby streets of seventies London, with their British Leyland cars with chrome bumpers, smartly dressed Bobbies and surly black cab drivers. So the film is, in this respect, a touching reminder of London in the seventies when the city had a slightly more down-at-heel sensibility, but much more zest and honest charm.
Which begs the question: what prompted the producers to think that the Canadian director of such lamentable films as Curse of Simba, The Second Best Secret Agent in the Whole World and Licensed to Love and Kill would produce a BAFTA winner? Who knows?!
Posted by Deighton Dossier at Monday, August 31, 2009