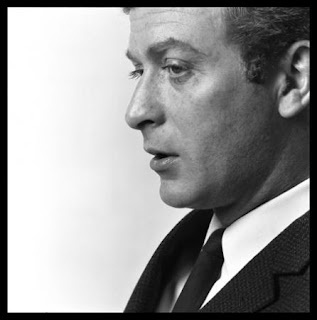 London really was swinging in the sixties - fashion, music, design, the arts, everything was expanding in technicolour contrast to the slightly drab sixties. Soho was at the epicentre of much of this cultural expansion; Len Deighton, Raymond Hawkey, Peter Blake and others at Central St Martin's College and then the Royal Academy led the way in design and modern art. It was also the period when photography was at the cutting edge of art.
One of Len Deighton's friends from that period and into the seventies, Brian Duffy, is to have a retrospective of his iconic photographs on show at the Chris Beetles Gallery in London, according to this article in The Guardian. Duffy was, along with fellow Londoners Terence Donovan and David Bailey, considered one of the famous three of photographers - the so-called "black Trinity" - who shaped the modern media's image of London in this time of tumult, photographing stars like Jean Shrimpton and Michael Caine (see above), as well as capturing 'old' London, such as the Krays. The zeitgeist of this exciting time was captured well by Deighton in his book London Dossier which gave a nod and a wink to the seamier - but more exciting - side of London that was emerging steadily throughout the sixties.
Duffy subsequently became a film producer and set up a company with Deighton to produce Oh! What a Lovely War. He was also responsible for the cover of David Bowie's seminal Aladdin Sane album.
Certainly - like Deighton - he was a renaissance man and London working class boy-done-good for whom the sixties was one huge cultural grow-bag in which his artistic talents could flourish. Info about the exhibition can be found here; visit Brian Duffy's website for some iconic shots from the sixties.
(Image reproduced here copyright of Brian Duffy)
Posted by Deighton Dossier at Tuesday, September 29, 2009