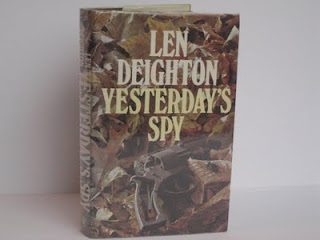 Today's been an afternoon of autumn spring cleaning of the Deighton Dossier site, adding more information, cleaning up a few menu anomalies and altogether making the site even better and more comprehensive than before. So what's changed?
Yesterday's Spy and Spy Story have now moved into the novels category in the book section. They'd previously been in the 'unnamed spy novels' category, linked to the original five 'Harry Palmer' novels running from The Ipcress File through to An Expensive Place to Die. I consulted the Jubilee editions of Spy Story and Yesterday's Spy - Grafton had issued paperbacks in1987 of all of Deighton's 19 books up to that point, each with a new introduction by Deighton, and I've just got hold of a pristine collection of all 19. In the introductions to these two books, he confirms that - despite textual references to the contrary, which have tripped up a number of reviewers and readers in the past (include me until recently) the character of Patrick Armstrong in Spy Story is not the 'unnamed spy' of Deighton's first novels, despite working for W.O.O.C.P. and possessing similar character links, not least a close working relationship with Dawlish.
Similarly, the unnamed narrator in Yesterday's Spy is not Patrick Armstrong, even though he maintains the same close working relationship with the US Colonel Schlegel character who appeared first in Spy Story. To some extent, I think this ambiguity was deliberate by Deighton, as it suits the murky, uncertain world of espionage and also from a marketing perspective allowed readers to maintain links with earlier stories. For example, on the US first edition of Spy Story, there is an explicit link in the blurb to the fact that the spy character from the first five novels 'returns'. I suspect this was a little over-enthusiasm on the part of the marketing department.
I've also added three new books to the book section. The Special Branch is an interesting, not widely available critical and literary analysis of 17 British spy novelists (with one chapter on Deighton) by a US english professor. Writers covered include John Le Carré, Eric Ambler, Graham Greene and of course Ian Fleming. The author is rather dismissive of Fleming's work as a writer, calling him "a minor writer who did little to advance the form." I'm sure many Fleming fans would disagree. Secondly, in the 'forewords' section of the site I've added information about The French Foreign Legion, a history written by Deighton's friend the photojournalist John Robert Young to which he provided an introduction. Finally, you may remember the writer Peter Mayle, famous for A Year in Provence. Back in 1979, he wrote a self-help book for soon-to-be-fathers, called How to be a pregnant father. Len Deighton provided 12 pages on cooking for such men, with comically simple recipes including how to make a sandwich, all illustrated in the strip style made famous in Action Cook Book. An interesting diversion.
Finally, I managed to get hold through eBay of a copy of the rare Commodore 64 computer game Len Deighton's Blitzkrieg. There's no other obvious from the design that there's a connection to the book of the same name from 1979. So, I contacted one of the designers of the game - John Lambshead - who confirmed that the publication of the deal was part of a deal with Deighton's publisher. John was a pioneer in the early period of computer gaming, and designed the first icon-driven game The Fourth Protocol, which I remember playing on my Commodore 64 in the 80s!
Posted by Deighton Dossier at Saturday, September 26, 2009