Behind the books - blog series on the 25th anniversary editions (3)

This is the third blog post continuing my efforts to mine some of the nuggets of insight and intelligence provided by Len Deighton in his forewords to the rare Silver Jubilee editions of his first 19 major works of fiction, from 1987. Len rarely writes about his own work, so these new forewords provided one of the few opportunities for readers to hear the writer talk about how he approached each of his book and  find out some revealing tales. You can find the other blog posts so far in this series here and here. 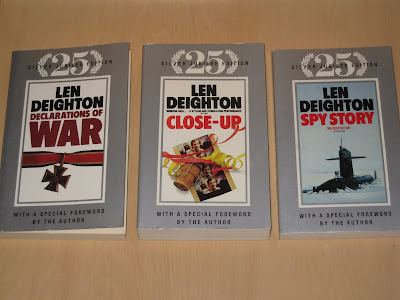 7. Declarations of War (1971)
This is the only collection of shorter stories written by Deighton, and provides something different from his earlier spy novels. Written soon after Bomber, it too takes a wartime theme but this time from across the ages, from the Roman era right up to the present day. But, as Deighton states in the foreword, he does not refer to this as a collection of short stories:

"As I told my publisher, Declarations of War is not a book of short stories. Books of short stories contain old bits of writing culled from ancient magazines or newspapers, and assembled together with little more than their author in common.

Declarations of War (with the exception of one story that had been published elsewhere) was written in one go, from start to finish. I had always tried to write so that each chapter of any book could stand alone. I'd always believed a book should be a collection of 'short stories', written and arranged in such a way that that reader who reads it right the way through is left with a complete impression of the author's initial idea. It's not easy to do, of course, and I wouldn't claim that I have ever succeeded. But in Declarations of War I took the opportunity to try this in another more extreme way."

This connection in the narratives does come across in the collection. All the stories share the theme of heroism,and the stress and impact of war on humans; his characters respond in a number of different and unexpected ways to the challenge of warfare. As Deighton points out in the foreword, his heroes in the stories - a jaded firing squad commander, the out-moded general, the nervous young flyer among others - are not heroes in the conventional sense. The characters and stories arose through Deighton's extensive military history research and contact with experts and old soldiers alike; but, his reputation for thorough research let him down in one story:


"Only with the story 'It Must Have Been Two Other Fellows' did I go badly wrong. I believe it's the worst mistake in research I've made so far (and if you know a worse one be so kind as not to write and tell me). Choosing carefully the sort of armoured vehicle that a man could become obsessed with took time, and provided me with an excuse to talk to many ex-tankers. The Sherman Firefly fitted the bill beautifully. I was equally careful about the Italian background with its specific slang and jargon. But too late I discovered that the Sherman Firefly was developed for the Normandy campaign. They were never used in Italy. Ah, well."

Some critics have said that Deighton's penchant for research and detail - particularly in military materiel - sometimes got in the way of plot in some of his books; but I think each of these stories is pretty well balanced and benefits from the unifying military theme. One story - 'First Base' - is set in Vietnam and was, by all accounts, a candidate for developing into a fuller novel. A Deighton novel set in Vietnam opens up all kinds of possibilities, but in the end all we have is a glimpse of what might have been, with this story of a soldier and his injured comrade coming upon an abandoned airfield deep in the jungle.

This foray into the corrupt, cut-throat and competitive world of Hollywood film-making is perhaps - until Violent Ward - Deighton's most conventional thriller, and his first departure from the military/espionage milieu. It tells the story of english actor Marshall Stone who, advancing in years, sees the parts dry up but is desperate to remain at the top; meanwhile, dark secrets are revealed as his ex-wife’s husband starts researching a no-holds barred biography.  It's a clever exposition of the 'star machine' of Hollywood at its most venal and ruinous.

The narrative is a thriller recounting the money men, the back-stabbing, the hassles and inherent falseness of the movie-making world which, as Deighton recounts in the foreword, led to his giving up on cinema production after his experiences on Oh! What a Lovely War in the 'sixties. The experience, however, stimulated his creative thinking:

"It was a fascinating period of my life and although writers are the lowest form of animal life in the film industry, I wasn't a writer: I was a producer. My role of producer opened the door to everything that happened. You can't lock the producer out, he runs the show and signs all the cheques. (I learned more about the film industry by signing the cheques than from any other source)."

Deighton informs the reader that the story developed during a trip to California, having checked into the Beverley Hills Hotel and joining a party in Malibu, still jet lagged. He spent much of his time talking to movie executives and financiers to get the detail which would create a vivid picture of the film industry and the craft of movie making. But he didn't want to write about the side of film-making he'd experienced himself; he felt that his development of the narrative, bringing together a series of characters as are found on any movie, wouldn't be suited to the first-person narrative of his earlier novels:

"It had to be a story about an actor. I knew many actors ('Oh! What a Lovely War' was a line-up of the great names of English cineman), I'd seen them at their best, and at their oh so horrible worst. For the purposes of this book I'd read all the standard works on acting and even been to the Royal Academy, and other acting schools, in my anxiety about getting the actor right. I'd become as interested in actors and acting as I was in the film business; I certainly wasn't going to write a book about a producer.

It was only when I got to the end of drafting the story that the solution appeared. I'd have the first-person narrative and third-person too, in alternative chapters that are finally seen to be resolving and endless.

9. Spy Story (1974)
After a number of years writing military and conventional thriller fiction - and mixed results from a sojourn into the movie business - Spy Story marked Deighton's return to the espionage arena into which he's burst successfully in the sixties. In the period since The Ipcress File, not only had Deighton's life and writing style developed - the Cold War had moved on too, become decidedly frostier as the doctrine of mutually assured destruction required the western Allies and Soviets to develop ever more sophisticated military strategies. It was clear, Deighton writes in the foreword, that he couldn't just replicate the approach of the first five ('Harry Palmer') spy novels:

"By the time I started writing I had worked out some things that I particularly wanted to do. First and foremost I wanted an associate for the hero. But I didn't want a Watson [note - Deighton was a significant scholar of Conan Doyle]. I wanted an abrasive superior who could give as much as he took. Colonel Schlegel was a creation that came to me from my time with the fighter pilots of the USAF and feel enough affection for him to want to bring him back some day.

The war game theme was one that I'd been toying with for a long time. I'd always been interested in war games. Even as far back as the fifties I remember watching a most interesting naval battle. It was organised by  a war games club. The opposing battle fleets were superb models sailing across the floor of a large meeting hall in a London suburb. The fleet commanders and their respective staffs were locked away elsewhere and only visitors and referees saw the battle in its entirety. It was this game above everything else that prompted me to write Spy Story."

A letter from a war game enthusiast who had programmed the attack sequence from Bomber on to a computer and played it out according to different scenarios prompted Deighton to take this initial setting and develop a conventional espionage story, in which his character Patrick Armstrong  joins the fictional Studies Centre in London and uncovers a plot to derail disarmament talks between East and West Germany. This novel was, he recounts, one of the easiest and best writing experiences of his life so far; the return to the espionage arena clearly benefitted his creative thinking, though this didn't extend as far as the title:

"I hadn't written a spy story for years, now I had written one again, so why not call it Spy Story, and everyone will know what they are getting. But it wasn't so easy. After years without arguments about titles (even The Ipcress File was accepted without question) I suddenly found that someone in a publisher's sales department had other ideas. Didn't I think 'Red Admiral' was better? No. That would sell more copies. I didn't care. Spy Story it remained. The title seemed to do no harm."

Spy Story. Does exactly what is says on the tin!
Posted by Deighton Dossier at Monday, April 19, 2010