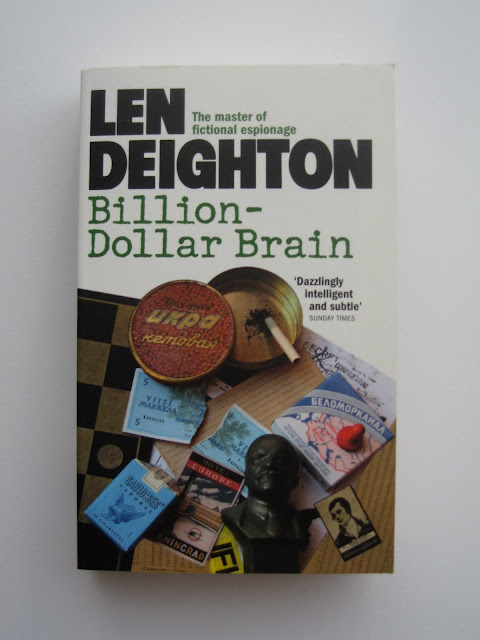 First published in 1966 by Jonathan Cape, Billion-Dollar Brain was Len Deighton's fourth novel in the 'secret file' series featuring the unnamed spy, who would later become famous as Michael Caine's Harry Palmer. Set largely in the Baltic, Palmer - his career seemingly on the skids - is given a lifeline with a job by the mysterious Midwinter, whose computer 'Brain' apparently holds the secret to defeating communism. What follows is a lesson in the lengths to ideology and money can lead a man.


The new introduction
Readers will find some interesting new observations from Deighton in this new edition, with most anecdotes new rather than reproductions of stories from the jubilee editions (see last blog on the reissues). With this fourth novel, Deighton went far behind the iron curtain both thematically and in reality. The lengths to which Deighton legendarily went to research his books and get right the details which authenticate his narratives are recounted here, as he recalls the troubles he took to get to visit Riga in Latvia, where much of the action takes place. Back in the sixties, travel to the East was heavily controlled and outside the purview of most westerners. Deighton's impressions of Soviet Latvia seem now, in the twenty-first century, chillingly evocative of a recent history many of us have forgotten. Back in the sixties, it was all too real:

"This satellite of the Soviet Union, deep behind the iron curtain, and in a region the Russians considered strategically vital, was astonishing. The wartime England in which I'd grown up was a dismal and deprived place but visiting Riga at that time was like a giant step back in time. The people in wartime England had never lost their underlying optimism that one day the war would be won, and good times restored. But the city of Riga was a quite different environment; a large prison camp with an occupying Russian army arresting anyone who smiled." During his visits Deighton writes how he was accompanied at all times by an interpreter/guide and was closely watched until it was determined he was not a threat to the soviets!

Deighton recounts how with this book he was settling into his stride as an author and carving out his own writing and characterisation techniques which would pay dividends through the rest of his career, but which ran up against literary norms of the time. "This was my fourth book and I needed to keep a close watch on the characters, some of whom had appeared in other books and might take part in future ones. Writing has always been hard work for me but I was beginning to enjoy the fun that made the hard work worthwhile. I am not a natural writer; I am a natural reviewer and rewriter and rewriter. Editors and publishers ... pressed me to conform to the orthodox methods of 'popular fiction'. For instance, they were united in expecting a full description of each character at the first entrance. I resisted all this fiercely."

Deighton made a decision to re-introduce and build up the character of Harvey Newbegin, who had made a brief appearance in Funeral in Berlin, as a counterpoint to the unnamed spy character, in the manner that Conan Doyle's Watson provided a story telling device for the Sherlock Holmes character (Deighton was a Holmes fan), a character who can keep the plot moving along through dialogue and retelling, and draw out new aspects of the lead character. Dawlish was a London man, not the sort of character who would share adventures with the lead character deep in Soviet Russia; for this, Deighton needed someone more adventurous, a more rogueish and mysterious figure. "But few readers will hold hands with Harvey in the way that they would with Doyle's Watson or my Dawlish. So who was there to like? The reader had only the hero. But as it turned out, I needn't have worried. Despite his many faults the reader like the hero."

Overall, this is one of the more interesting new introductions by Deighton. Though only five pages long, with the scarcity of previous articles and biographical by and about Deighton in the last few years, it's interesting to find some new perspectives you haven't read before. 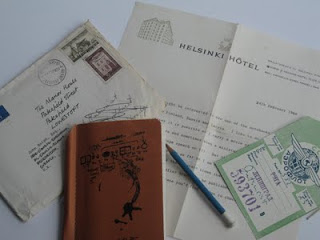 In the sixties, Deighton's publishers had sent to booksellers an envelope containing a letter and various bits of ephemera from Finland and Riga which were symbolic of some of the key locations and scenes in the book, as part of the marketing push. Included in this envelope (see picture) was a facsimile of a notebook by Deighton, in which he records some of the details and images which would make the narrative such a compelling read.

Arnold Schwartzman's theme of the chessboard decorated with associated ephemeral items associated with the characters brings that to mind. Again, he's created another iconic front cover, for which he provides some interesting notes in this edition. Colonel Stok is a significant character in this novel again, at the heart of Soviet efforts to defend communism from General Midwinter, and elements of the front cover point to his character: "KGB officer Colonel Alexeyevitch Stok's relish for caviar is matched only by his scholarly passion for the works of Robert Burns. A portrait of the poet sits beside a pack of Russian cigarettes illustrated with a map of the Soviet Union. The pack provides a haven for the "Red" pawn." The bronze bust of Lenin rests on a box of computer punch-cards and a cen 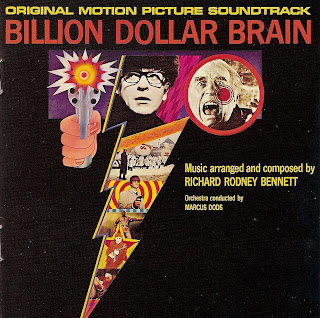 Less immediately catchy than the John Barry soundtrack to The Ipcress File with its haunting zither theme, Richard Rodney Bennett's rousing score to Ken Russell's adaptation of Billion Dollar Brain certainly has much to commend it. Label Kritzerland has just released a 1000-copy limited edition of the soundtrack and it's well worth a listen.

Bennett uses a full orchestra, with up to three pianos and a lot of brass. This strident tone comes across well with the theme for the scenes in the church and in the opening title sequence around King's Cross when 'Harry Palmer' walks to his office above a shop and receives the telephone message from the computer, offering a new freelance intelligence job.

Interestingly, the tracks on the album are out of sequence with the associated scenes in the film, but it doesn't detract from an album that does capture the nordic iciness and the insanity of General Midwinter's headlong rush to bring down communism in the Baltic States. It is also the only album I know of which uses an instrument called an Ondes Martenot, a keyboard instrument rather like a Theremin; this gives the wispy refrain associated with Anya, the Soviet agent who tracks Harry Palmer to Helsinki, and the trips they make by skidoo to the island house where Palmer meets old friend Harvey Newbegin.
Posted by Deighton Dossier at Sunday, December 13, 2009