A new perspective on Fleming and Deighton 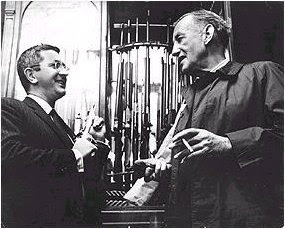 007 Magazine's latest edition, now in its thirtieth year, has in its latest edition a very interesting article - accompanied by some great press photos taken for the Daily Express - of the time when Len Deighton, creator of 'Harry Palmer' and Ian Fleming, creator of James Bond, met over lunch.

In 1963, when The Ipcress File was riding high in the sales charts - Fleming had chosen it as one of his books of the year - Deighton was very much the arriviste in the spy fiction world. Peter Evans of the Daily Express brought the two authors together over lunch in The White Tower restaurant on Charlotte Street (together with designer Raymond Hawkey, though he is rarely mentioned in the subsequent article). This is quite a famous interview, which appeared in For Bond Lovers Only in 1965, along with the images reproduced in the magazine.

The magazine's editors have got quite a coup by getting Len Deighton to write a few words of recollection about this interview. Fans of both Deighton and Bond will be fascinated to read the new detail about this auspicious meeting. Sample quote from Deighton's new contribution:

"He [Fleming] was fussy about his food and wine and he knew I was writing about food in The Observer newspaper. I seem to remember we talked a lot about the menu before ordering the meal."

The magazine retails at £9.99 online. Well worth a look.
Posted by Deighton Dossier at Friday, December 11, 2009