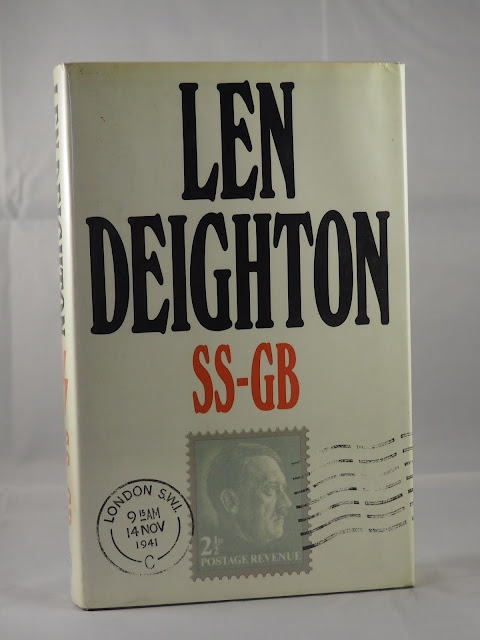 Thanks to reader and Dossier follower Terry Kidd for sharing this perspective on the books, in which he compares historical fiction it portrays with what actually happened.

SS-GB came out of what I think of as Len Deighton's Second World War aviation period after Bomber and Fighter. It was published in 1978. SS-GB is more than just a look at London under Nazi occupation. The story touches issues that go to the heart of the Nazi ideology and the reasons Germany lost the war.

I’ve long been a sciencew fiction fan and when SS-GB first appeared I was delighted to find the unique voice of Len Deighton in an alternate worlds setting.

In 2017 we got the TV version. Scripted by Neal Purvis and Robert Wade, the writers of the recent James Bond films, with top productions values and a great cast. It is a worthy version. Moreover, being a mini-series rather than feature length, it was possible to stick much closer to the novel and pleasingly, many lines of dialogue are lifted straight from the page. But there are differences in plotting some of which I’ll discuss here.

The TV version opens differently to the book. What is described in voice over as one of the last surviving Spitfires flies over central London and lands on the Mall. It is being flown by a Luftwaffe pilot. The Battle of Britain has been lost and London is in German hands.


In an alternate history account we may wonder why the world came to deviate from our own timeline. Why in this world has Operation Sea Lion, the German amphibious invasion, taken place?

In 1940 Hitler believed that if RAF Fighter Command could be defeated and the Royal Navy kept under control, the German army could successfully invade. The planning for Operation Sea-Lion identifies the landing points and the German army units to be used. During the invasion German vessels, including the submarine service, would keep the Royal Navy at bay but the Royal Air Force would need to be neutralised first.

In July 1940 Hitler offered the British terms of a negotiated peace, a further offer, in secret, was made in early September 1940. These were rejected and the planning indicates that the invasion would have taken place between 20-25 September 1940. It was hoped that Italy would simultaneously initiate fighting in Egypt which would keep other elements of the British armed forces occupied and unable to support the defence of Britain.

So why did operation Sea-Lion go ahead in the world of SS-GB? The Battle of Britain was a close thing and in our timeline British aircraft losses came perilously close to being excessive. Quite small changes might have tipped the balance.

Also in our timeline, an incident frequently referred to is the RAF bombing raids on Berlin in August 1940. While these were not tactically significant they had the effect of causing Hitler to order the Luftwaffe to make retaliatory raids on London. These diverted resources that might otherwise have been used against Britain's airfields, radar systems and supply lines. Perhaps in SS-GB's timeline those RAF raids did NOT take place and so the Luftwaffe continued to attack the significant military targets.

But other possible butterflies exist.

An earlier decision to equip the Messerschmitt Bf109Es, which were the Luftwaffe’s primary fighter, with an external fuel tank is worth considering. The additional centre line fuel tank, when fitted, doubled the range of the Bf109E and this would have made a huge difference to the aircraft’s effectiveness in combat. Such a change was made but not until October 1940, a few weeks too late to help the German effort.

In our timeline, Hitler ordered the Luftwaffe’s escort fighters to stay in close proximity to the bombers, which is to say fly lower than their altitude for best range. This cost the fighters more fuel than if they had stayed high. Flying higher would have increased their range and allowed them to engage the RAF sooner and for longer. Attacking from altitude would also have offered further advantages.

Radar played a vital part in the RAF’s operations. With radar they were able to see the Luftwaffe units forming up over France and schedule the defence accordingly. Perhaps less pre-war emphasis on radar development would have changed things.

As it turned out, even after weeks of fighting on 15 September, the RAF were still able repulse two large attack waves. On this day, the RAF deployed every available aircraft in 11 Group and 60 Luftwaffe aircraft were shot down, while the RAF lost 25.

After the Battle of Britain was lost, Operation Sea-Lion was postponed until Spring 1941. Hitler turned his attention towards Russia and launched Operation Barborosa. Yet some planning for Sea-Lion continued. Finally in February 1944, it was abandoned completely.

I’d love to hear what Len Deighton thinks might have made the crucial difference. If Len had a specific theory it seems that the narrative structure of the book didn’t permit it to be included.

In 1945 the highest building in London was the dome of Saint Paul’s Cathedral, as we discover as we follow that Spitfire in the opening moments of episode 1. London itself has changed but for SS-GB the TV series, a special mention must be made of the production design. The streets of the conquered capital are dressed in swastika flags and the familiar red London phone boxes have been replaced with a design similar to a Berlin phone box of the time. Postage stamps show Hitler’s head and refer to the Greater German Reich. The London Underground becomes the U-Bahn.

And there are some British people making money out of the occupation, not just the conquering Germans. The antique trade is booming and in one scene we hear how Britain’s art treasures are being plundered from the London galleries and passed, very profitably, into private hands.

Douglas Archer has an interest in jazz and the appearance of the paintings of Sylvia are described as 'entartete Kunst' (degenerate art). Hitler preferred naturalistic art, such as the Turner that Douglas is looking at when Peter Turner accosts him at the home of Sydney Garin. The Nazi’s ridiculed Entartete Kunst - essentially, anything abstract. They put jazz music, which they associated with the 'untermensch', into the same category.

In our world the Nazi’s sold off the abstract artworks bought by the previous government and sought to promote a naturalistic style. For more on entartete Kunst see this blogpost.


The plot is the motor that drives you around and allows you to visit the world that has been created. The plot includes the historical fact of Britain’s early lead in atomic physics. The photographic film with the nuclear equations is a classic ‘McGuffin’. Additionally, Len Deighton offers a new angle.

In our own timeline, Britain shared its atomic secrets with the USA and atomic bomb development continued with great effort and massive investment by the USA. Richard Feynman, in his memoirs of his work on the Manhattan Project, relates how the team were developing the atomic bomb for use against Germany. Of course, it was not certain that it would work until the first test firing, and the allies invaded Europe anyway and brought the European war to an end by conventional means.

So, the modern reader knows what an atomic bomb means and what it would mean to the war effort, but it seems to me that in the novel only Mayhew grasps its real significance. The rest are in good company; in our world even Churchill was unconvinced about the potency of an atomic bomb. But the fact that the modern reader knows more notches up the tension. I thought this was a very clever trick to pull off and I’m at a loss to see how any writer could do it outside the world of historical fiction.

The Nazi dominated SS was particularly sceptical about the viability of nuclear weapons although the German army had a nuclear reactor project. The Nazi scepticism about the viability of nuclear weapons came from an ideological opposition to what was thought of as a Jewish science. The Deutsche Physik movement rejected scientific theories such as nuclear fission and quantum physics. Only Huth rejects this short-sightedness and he tries to associate nuclear physics with the occult, rather than have it associated with Jewish science, so the idea might be made more palatable to the Nazi high command.

This ideologically driven oversight, and the turf war between the SS and the Germany army, affords the British resistance room to manoeuvre. This allows Douglas and Harry Woods to get the King out of German custody and tempts the Americans to launch their assault on Bringle Sands and thus the final battle of the story.

Interestingly the influence of politics into ‘preferred’ scientific thinking is still pertinent.


When reading Len Deighton, I always feel that I share some values with the writer. For me this is a major part of the appeal.

A trip to a prison camp allows Douglas a chance to meet some the defeated British soldiers. (The meetings are unfortunately missed from the TV series). We hear of calm courage and a valiant rearguard action in support of the Royal Navy.

Later, a young man is struggling to master his new artificial limb and the sadness of his loss is powerfully conveyed. They both turned to watch a young man with a shiny-new artificial leg. It was obviously the first time he’d worn it. Perhaps he’d hoped to strap it on and run home. Tragic disappointment was written all over his face. A patient older man, a senior officer reduced to menial work by the Nazi conquest, tries to help him maintain his dignity.

In his travels around London, Douglas discovers old friends in reduced circumstances. Mr Samuels, formerly the proprietor of a classy West End Restaurant; now, because he is Jewish, selling fried turnip pieces. These and the other quiet indignities of a land under occupation are thoughtfully illustrated.

Such compassionate examinations are unusual in books about the war. It’s scenes such as this that show us that Len Deighton is on the side of the good guys.


In making a hero out of a British policeman working for the German SS, Len Deighton took on a challenge. It would have been far easier, and far less ambitious, to have written about a resistance fighter. In order to make us sympathise with Douglas his circumstances are carefully chosen.

Douglas is a family man with a son who has lost his mother. He has to think of the consequences of his actions in relation to young Dougie, how would the youngster cope if he lost his father too? This make Douglas vulnerable to influence by the conquering side. Douglas is one of the good guys but he has to be pragmatic for the sake of his son. After he has been reassured by Mayhem he’s able to wholeheartedly buy into the mission.

Mayhew is the only man who really knows what’s going on. He chooses to let the King die in an ambush that he has engineered. He, as revealed by Huth in the final chapter, carried out the murder that kicks the whole story into life. And he, unlike the Nazis, understands the real significance of the atomic bomb and the need to make the Americans fight for it.


In this piece I’ve looked at SS-GB and at some of its origins.

Truth, as they say, tends to be stranger than fiction because fiction has to make sense. SS-GB mixes truth and fiction and the novel does makes sense in that final chapter where Huth fills in all the blanks for Douglas. The TV series leaves the door open for a follow on.

Len Deighton produced a carefully plotted murder thriller drawing on what was known about the times. It’s sobering to think that the world of SS-GB might have been just a few beats of a butterfly’s wing away from what actually happened.
Posted by Deighton Dossier at Sunday, January 27, 2019