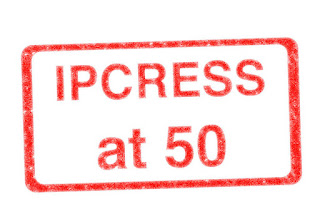 What this signifies I think is that The Ipcress File is a marker post for what was in 1962 the next wave in spy/thriller fiction. If the pre-war years were the work of the trusty amateur spy (in real life and in fiction), by the War and postwar years agencies had had to become more professional, and so did the fictional spies. If Bond was the model, nerveless suave professional in the ‘fifties, what was ‘Harry Palmer’? 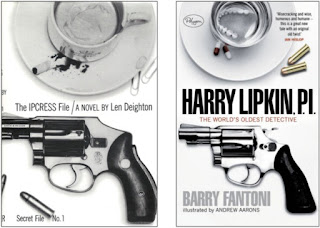 
Up on the main Deighton Dossier website is a copy of the article Edward wrote for 007 magazine on the work of Ray Hawkey, which of course included pivotal covers for the James Bond stories as well as innovations in newspaper magazine illustration and design during his career as a designer.

See this post by Mike Dempsey to get the design world's perspective on the story. 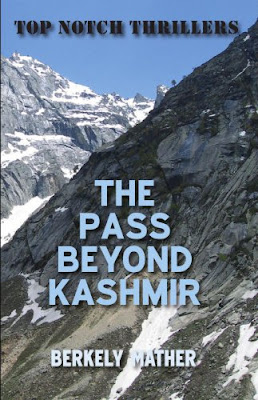 Posted by Deighton Dossier at Wednesday, July 04, 2012 No comments:

Jason Whiton, author of the excellent SpyVibe blog, has kindly included the Deighton Dossier website in his series 'For Your Shelf Only'.

In this blog series, Jason is in conversation with writers and collectors around the Internet who are contributing to the growing shared knowledge and enjoyment of all things 'espionage' in culture. In our interview, we chatted online about how my collection of Deighton books started, how the site developed, and what Len's works give me as a reader.

I'm pleased we could contribute to this excellent website, which is one of the members of the C.O.B.R.A.S. online grouping of bloggers and definitely a site to bookmark. Watch out for other interviews covering all aspects of spy fiction and culture.
Posted by Deighton Dossier at Wednesday, July 04, 2012 No comments:

This article, by Wesley Britton, is reproduced from his SpyWise site which will shortly close down. Wesley's invited members of the C.O.B.R.A.S. network to look through the website and, rather like an online rummage sale, pick out the items they like to re-post them, so that they remain up online for people to read about them.

I've picked this article about Michael Caine's film career. Wesley sets out the key role that spy characters have played in its development, not least his ground-breaking role as Harry Palmer. Enjoy.

A Spy-ography of Michael Caine

From Harry Palmer to Austin Powers: A Spy-ography of Michael Caine

Hmm. Sean Connery immediately springs to mind. Seven Bond films alone. He also had significant roles in Tom Clancey's Hunt for Red October and John Le Carre's Russia House (both 1990). He didn’t fare as well in outings like The Avengers (1998) and The League of Extraordinary Gentlemen (2003). All this places him in the first rank of moviehouse spies, far ahead of Roger Moore who also starred in seven 007 films along with a few "Saint" outings, only one of which can be considered espionage-oriented (being The Fiction Makers in 1966). Anyone else?

For my ticket price, one name stands out as being the man unquestionably involved in more quality spy projects than anyone else. Michael Caine. He turned out to be the spy for all seasons based on determination, talent, and a bit of luck. And perfect timing.

Bret Rensselaer has vacated his desk ....

While I was away on holiday, there was sad news that British actor Anthony Bate passed away. I remember him of course from his portrayal of Samson's boss - and antagonist on the battlefield of office politics in London Central in all nine books of the series - Bret Rensselaer, in ITV's 1988 TV series. Check out the Guardian's full obituary.

He is also perhaps more familiar to most fans of spy fiction from his portrayal of civil servant Oliver Lacon in the BBC adaptation of Le Carré's Tinker, Tailor, Soldier, Spy and then the sequel, Smiley's People. However, as an established actor he has a tremendous CV of threatre and film appearances, including in Treasure Island, Crime and Punishment and Les Miserables.

Sadly, it looks like we're not able still to see Anthony's portrayal of Bret due to Len's continued decision not to permit further re-runs of the show or a DVD release. Len had reasonable doubts about some of the casting in the show, which explains his decision, but I do think Anthony Bate got Bret's mid-Atlantic drawl and position as the eminence grise of London Central just right.