Anyone reading this blog is recommended to visit Permission to Kill, David Foster's site about all things espionage in popular culture, which has excellent news items on current authors, reviews of films new and old with a spy theme. He's also part of the COBRAS network - the Coalition of Bloggers wRiting About Spies. Mabye I'll join soon, who knows!
Posted by Deighton Dossier at Friday, May 29, 2009 No comments: Links to this post

Yesterday morning at 1130h on Radio 4 we heard the first public comments from Len Deighton for quite a while, on the programme The Deighton File, which can be heard for the next week on BBC iPlayer. I guess the Deighton Dossier's been taken as a title!

Anyway, this was a mini biography marking his eightieth birthday, taking the listener on a whistlestop tour from his birth in London and childhood among the Upstairs Downstairs reality of wartime London as a working class kid, through to his semi-retirement in America and his enjoyment of finally putting down the pen. In truth, only about 10% of the broadcast was Deighton, though I suspect there might have been much more on the tape that wasn't used. Much of the content and the colour came from other contributors - Edward Milward-Oliver, his bibliographer (though described in the programme as his biographer); Jeremy Duns, the novelist who's been described as having Deighton-esque qualities; historian Max Hastings and food writer Henrietta Green, all describing different aspects of Deighton's life which together create the rounded polymath and man of the world who brings all this to bear on the page.

What we heard of Deighton was of interesting, including some subjects not covered in previous interviews. His 'exciting' experiences of World War Two as a child, and his finding 20 people dead in an air raid shelter during a bombing which he says 'put things in proportion'. The most fascinating insight into his approach I felt was his description of how he came to write the Action Cook Book for men. He realised that you had to attract men to cookery with a scientific, laboratory approach. So, when describing how to make a dish, you didn't write about the ingredients. You asked the reader to imagine the difference between putting a hand into a hot over at 250 degrees, and putting his hand into a boiling pot of water at 100 degrees - "the relationship bettween heat and temperature is the key to all cookery" were Deighton's words of wisdom.

Later on, listeners heard stories about Deighton inviting Paul McCartney to dinner to try and persuade the Beatles to star in Oh! What a Lovely War in the sixties, and his finding in the last few years that - having abandoned his typewriter - he rather enjoyed not having to write and could enjoy other aspects of his life.

Jeremy Duns, summing up, got it right. He described Deighton as the 'spy novelist, as spy' - a writer who gives the reader the feeling that they are a direct observer of the espionage world, giving you the inside track about things you're not supposed to know.

An excellent programme. A transcript can be downloaded from The Deighton Dossier website - just click on the link on the front page.
Posted by Deighton Dossier at Wednesday, May 27, 2009 No comments: Links to this post 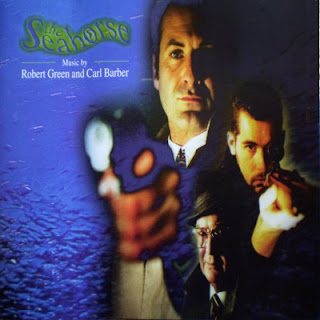 I've now added a page to the main Deighton Dossier website - in the section called 'The Rest' - about a piece of music I came across on eBay, of which I'd heard nothing before, called The Seahorse. This is a concept album by Robert Green and Carl Barber from 1996, and is in the form of a 'mock' soundtrack for an unseen film - in this case, Deighton's Horse Under Water. After mentioning this CD on the blog - and giving it an initial equivocal review - Robert Green got in touch and gave me some of the background to this album, which on some of the tracks has a definite 'John Barry' sixties film feeling to it. Check out the brief interview on the website. It's a very rare CD - no longer available through conventional means - but it has curiousity value and in the absence of any Harry Palmer film based on the book, it is the nearest thing we have to pictures of Harry Palmer driving down the Algarve in search of heroin smugglers. Keep an eye out for this album...definitely something to have on in the background when you're reading the book that inspired it.
Posted by Deighton Dossier at Sunday, May 24, 2009 No comments: Links to this post

Jeremy Duns - whose debut novel Free Agent I'm reading at the moment - has an article in The Sunday Times today in which he recounts how spy fiction and the harsh reality of espionage and the Cold War have often been more closely connected that you might think. He highlights for example that Somerset Maugham had previously worked for British Intelligence. He makes a brief reference to writers like Deighton, Fleming and Le Carré.

In other news, the re-issuing of the Action Cook Book has received a lot of good write-ups...particularly from food writers, many of whom recall just what a phenomenon this book was when it came out in the sixties. In Saturday's Daily Mail there is a story by Tom Parker-Bowles in which he looks back at how Deighton combined changing the course of spy fiction with being a trained chef and a renowned gourmand in sixties SoHo. He provides comments from fellow food critics:

"'I love the book because of its brilliant design and because of all those classic recipes that I still adore,’ says Simon Hopkinson, author of another classic, Roast Chicken And Other Stories.
‘They’ll never go out of fashion.’

Food writer and broadcaster Matthew Fort agrees. ‘It arrived like a breath of fresh air, full of wit and humour and decent recipes. And it demystified cookery, too, with those wonderful strips, and transformed the life of the Sixties bachelor. The book was decades ahead of its time.’"

For most people, Len Deighton is still associated just with the spy novels, and 'Harry Palmer' in particular. The masterstroke of re-issuing first the Action Cook Book before the subsequent re-issuing of his best spy novels is that it reminds the book-buying public of how Deighton, in the sixties certainly, was justifiably renowned in two separate spheres of achievement.

Posted by Deighton Dossier at Sunday, May 17, 2009 No comments: Links to this post 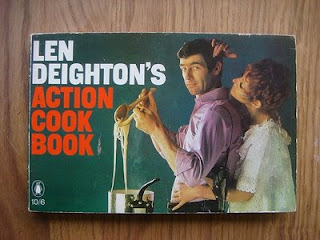 Just dropped through my letter box is my copy of the newly re-issued Action Cook Book by Len Deighton, arguably one of the most influential cook books of the second half of the twentieth century. Flicking through it again, you realise just how cutting edge and influential the design was, with the line drawings, simple text and grid layout helping even the most inexperienced cook create something tasty and fresh. You can tell, just by examining the index, this was the first cook book that really understood that most men of the time needed to start right from the beginning: there are chapters on:
even before he starts thinking about any recipes. It was very much a primer for the 'chap' who had never ventured into what was then seen as often the woman's domain - Deighton's book made a significant dent in that perception. Above all, the recipes in here stand the test of time, and reflect Deighton's status as a first-class cook and gourmand and lover of French cooking, recipes like Caneton a l'orange, cassoulet, coquille St Jaques.

The book includes a new foreword by Deighton, in which he writes: "of all the books I have written none of them is dearer to me or more personal than this one." He recalls how his cookstrips were influential in encouraging consumers to source better ingredients and to revisit old favourites which had gone out of fashion. The many different recipes reflect Deighton's status as a traveller and researcher, always picking up new ideas wherever he goes: he leanred to cook squid from a Portuguese fisherman (he also lived in Portgual for many years); he watched a Viennese grandmother produce a superb cheesecake using a childhood recipe; while working as a waiter in Piccadilly, he learned strudel dough from a Hungarian chef.

This is a fascinating book which both harks back to swinging sixties London and the genesis of international cuisine culture in the capital, but remains totally relevant today.
Posted by Deighton Dossier at Saturday, May 09, 2009 No comments: Links to this post

Just been reading an excellent article in today's Sunday Times by Brian Moynahan which looks back on the momentous year of 1989. he makes a point about how used we'd all become to the Cold War in the West:

"In Britain, it was alarming in rare moments of crisis, but most often it was a sort of permanent background hum: woolly caps with CND badges, spy novels by Len Deighton, V-bombers at the Farnborough airshow, and lots of initials: ICBM, BAOR, MIRV, MiG, SS-20. The vast range of Soviet rocketry aimed at us was out of sight, of course, and our squaddies were in their bases in West Germany. The protests were inward: Ban the Bomb meant ban our bomb."

It is incredible now to think back on this year which totally altered the geo-political structure of Europe, in much the same way as the 1848 revolutions gave a warning to the ancien regimes of Europe. They fell sixty years later; the communist regimes in Europe fell, one by one, over the space of a few months. Of course, this also meant a seismic shift for thriller writers like Deighton, Le Carre and others, who found one of their principle dramatic constructs - the divide Europe - disappear almost overnight.

Well worth a read.
Posted by Deighton Dossier at Sunday, May 03, 2009 No comments: Links to this post

A man who can

A very interesting trip for me to Leicester to see James Pickard, book dealer and expert in all things Deighton, Fleming and Le Carre (he wrote the widely-acknowledged best bibliography of Ian Fleming's work), so he knows his onions when it comes to all the stories about the books which made these authors' careers. Through him I've now added some real gems to my Len Deighton collection and plugged a few gaps. His 'shop' is a real treasure trove of gems which would make most readers weak at the knees, and he's a great source of stories - he told me he was partly responsible for getting Len Deighton to contribute the foreword to the second edition of 'The Battle for Bond', the book which initially was banned by Ian Fleming's estate because of potentially libellous content. You can find a link to James' website on the link list on this blog.
Posted by Deighton Dossier at Saturday, May 02, 2009 No comments: Links to this post