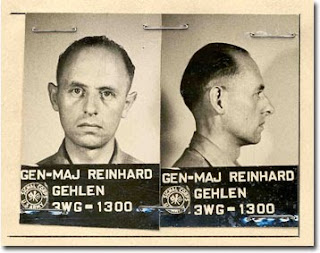 One theme which crops up from time to time in Deighton's works - in the Game, Set and Match novels with the Bernard Samson character, in particular the Winter prequel novel, detailing the post-war Berlin of his father; in XPD and Funeral in Berlin - is the role and influence of the networks set up by Reinhard Gehlen, which I've been reading up on recently online. It's a fascinating early part of the history of the Berlin spy networks and I've found some interesting snippets of information about it from my research. It's a fascinating story and you can see why Deighton would use it as source material for some of his stories.
In XPD, for example, Willi Kleiber, a German Moscow agent, leads the hunt for the Hitler Minutes at the heart of the story which were hidden by the Nazis in the Kaiseroda mine and subsequently found by the Americans. He is a former Abwehr officer who went to work for Gehlen after the war. In Funeral in Berlin, it is the Gehlen organisation which arranges the transfer of Semitsa from East to West Berlin (the chaps with the rimless specs and the hearse). Brian Samson - Bernard's father - was Berlin resident in the post-war period (which is covered in dialogue in Game, Set and Match, mostly when Bernard Samson chats with the Berlin Resident Frank Harrington) and dealt with many of Gehlen's agents.
Gehlen was a former Wehrmacht officer who was in charge of the Fremde Heer Ost unit (Foreign Forces - East) which gathered intelligence on tactics and personnel on the eastern front. In March 1945, as the Russians closed in, Gehlen and his associates micro-filmed all the files and stored them safely in drums, knowing the value of the intelligence. After capture, he was turned over to US army intelligence (or, it seems, spirited away by them!). In 1946 he returned to German to set up the 'Gehlen Organisation' of former German intelligence officers. A number of them were senior SS officers many of whom were on the central registry of war crimes suspects; clearly, the CIA was prepared to turn a blind eye. The hiring was overseen by Willi Krichbaum, his chief recruiter. Krichbaum, head of the dreaded Geheime Feld Polizei (GFP), recruited some pretty rogueish individuals into the network of agents.

The Gehlen Organization wasn't a total success, despite considerable funding by the US. Indeed, one author on the US and the Nazis, Richard Breitman, has written: "Reinhard Gehlen was able to use U.S. funds to create a large intelligence bureaucracy that not only undermined the Western critique of the Soviet Union by protecting and promoting war criminals but also was arguably the least effective and secure in the North Atlantic Treaty Organization. As many in U.S. intelligence in the late 1940s had feared would happen, the Gehlen Organization proved to be the back door by which the Soviets penetrated the Western alliance."
One mission by the Gehlen Organization was Operation Rusty that carried out counter-espionage activities directed against dissident German organizations in Europe. They assisted in the Berlin Tunnel which was constructed under the Berlin Wall to monitor East German and Soviet electronic communications, although it ultimately failed. The Gehlen Organization was eventually compromised by communist moles within the organization itself and within the CIA and the British MI6, particularly Kim Philby.
In the morally grey world of espionage, the aphorism of my enemy's enemy is my friend - or rather here, my former enemy - was, for the Gehlen organisation, most apt. One interesting paper from the US National Security archive provides more details on what the CIA knew - it's fascinating to read some of the original papers around the time the networks were being set up, which you can find at the bottom of the page linked to here. For a man who ran former Nazis as agents into the Communist East, Gehlen did okay for himself in the new Germany, his organisation subsequently becoming the BND (Bundesnachrictendiest), the German intelligence service.
Is anyone aware of any recent books, or articles about the Gehlen networks which they could recommend? There are some mentioned on Wikipedia, but it looks like they're out of print (one is by notorious historian David Irving!).
Were there any films or TV series made about it (either in English or, more likely, German?) There are some fascinating stories there which would make great fiction and non-fiction films.
Posted by Deighton Dossier at Monday, October 12, 2009