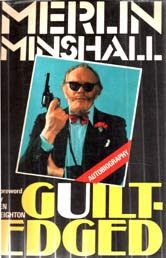 I missed this article in The Independent from a couple of weeks ago which is a rather fun review of the British spy film, and why the genre has lasted so long. The post followed the recent season of British spy films at the Cambridge Film Festival, which unfortunately I missed (did anyone visiting this blog go? What was it like?).
One interesting Deighton reference: 'Thomas Hennessey, co-author of Spooks: the Unofficial History of MI5, likewise names The Ipcress File as a spy film with at least a hint of credibility about it. "It's low-key. It's slow," he says approvingly of the movie adaptation of Len Deighton's novel that is as famous for its scenes of Harry Palmer (Michael Caine) cooking omelettes as for its action sequences.'
More broadly, reading this article reminded me there is something quintessentially English about the best spy films that set them apart from the Hollywood Bourne-a-likes. This I think reflects the fact that most of the 'characters' in the history of British spying were, until recently at least, proper 'Characters' in the best sense of the word. While we are nowadays told by our lords and masters to decry the role and influence of 'Oxbridge' in the espionage world - heck, the world generally - (though, as a Trinity Hall post-grad, I must humbly disagree) - I think the British upper middle classes really did provide some of the best back stories and characterisations for espionage film makers to draw upon.
But one gap instance springs to mind; one chap whose exploits, as far as I know, hasn't influenced the silver screen of spy moviedom, when they're tailor-made for same. The stories of Merlin Minshall, former MI-6 operative under Ian Fleming (whose biography Guilt-Edged is an absolute cracker) cry out to be made into a film. He is one of those classic English 'gents' whose exploits, disdain for authority and tendency to look down upon 'johnny foreigner' while romancing said johnny foreigner's women on foreign missions, and whole-hearted 'derring do' approach. It's no surprise that he is regarded by some observers as one of the influences on the James Bond characterisations.
Minshall was the first man to sail a barge across Europe by river before the war; during his trip, he 'fell in' with a Nazi spy ring and narrowly avoiding being killed by a German assassin with whom he'd courteously been making love in the weeks previously; he then single handedly tried to destroy a key Nazi shipping route on the convoy in what can only be described as a 'foolhardy' operation. Subsequent he was the first British agent sent into occupied France by submarine and later in the water 'discovered' a secret German army in the middle of the Congo! Having become the first man to motor-cycle across the Sahara! With real-life characters like Minshall to draw on from the war period onwards, it's no surprise British fiction writers and film-makers carved out their own niche.
Posted by Deighton Dossier at Monday, October 12, 2009