Small snippet I noticed this morning, clearly as part of the PR around the re-release by Harper Collins of Len Deighton's French Cooking for Men - though I struggle to see the connection. Deighton gives his opinion on Francis Ford Coppola in this month's GQ magazine online and outlines what he think are the issues a modern re-interpretation of this film should address.

Catch the (brief) commentary here.
Posted by Deighton Dossier at Sunday, March 20, 2011 No comments: Links to this post 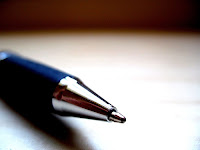 A number of blog posts on the Deighton Dossier seem to attract a lot of traffic, with the numbers of readers posting comments increasing, albeit slowly. The most recent post, highlighting an excellent article which asked if spy fiction can be considered contemporary art, being a case in point.

However, I'm conscious that there may be readers of spy fiction and fans of Deighton who visit this blog, who have interesting things to say. About contemporary spy fiction; about the inevitable comparisons between the great writers ... and great characters; about the links between fiction and contemporary history; about collecting rare items to do with Deighton or any author from this genre.

This is a short post to say that if you've anything you want to contribute to this blog - a short news blog, a long article, a critique, a piece of research, do get in touch with me and I'll happily consider it. Email me through the website.
Posted by Deighton Dossier at Friday, March 18, 2011 No comments: Links to this post

Email ThisBlogThis!Share to TwitterShare to FacebookShare to Pinterest
Labels: blogs

Question: can the spy novel be art?

At the suggestion of blog reader and writer Craig Arthur from New Zealand, and with due credit to his friend and Lawrence Durrell fan Daria Novikova, I thought I should re-link to an interesting online debate from 2009's Open Salon blog, in which the editor, writer Steven Axelrod, asks the question:

Can genre fiction aspire to literature? Can a police procedural or a spy novel be written so well that becomes a work of art?

To answer this question, Axelrod adopts the tactics of WWE and hosts a fiction 'smackdown' between two masters of the spy novel and the police procedural (something to which Deighton has often ascribed as an influence on his writing), to see if a head-to-head comparison of these two related, but subtly different genres, offers up some interesting insights.

Axelrod therefore pits Len Deighton against Lawrence Durrell, author of The Alexandria Quartet. First off, aside from considering the normal factors in any literary criticism - style, tone, language, technique, setting etc - he considers ambition: to what extent does the ambition of the writer to delve deeper into a subject and chew it thoroughly before spitting out the words onto a page drive a book from a mere story to the levels of art?


"We can begin to break this monolith of ambition down into its component parts: iconic characters; a deep understanding of the social and political worlds and the way they penetrate the private lives of ordinary people; poetic language; fascination with the form of the novel itself; a resonant sense of place; and finally, a pervasive curiosity about human relationships, the negotiations and passions, the flaws of perception, the delusions and desires that pull people together and drive them apart."

It is an interesting question, and Axelrod - in painstaking detail, it has to be says - takes this starting place to explore and judge the qualities of Durrell and Deighton, in this case through the Game, Set & Match trilogies based around spy-turned desk jockey-turned-spy Bernard Samson. As Axelrod writes:


"These are two massive projects, built with a strikingly similar blue-print: a story narrated for most of its length by a narrator whose basic grasp of events is tenuous at best; a revelatory volume in the third person that reveals the extent of the narrator’s misunderstanding, followed by a return to the first person."

Check out part one and part two of this long, but fascinating blog posting for the full exposition. In part two, for example, Axelrod comes to these serial novels from the perspective of character, highlighting this as potentially the key factor shaping the stories and the ultimate outcomes facing all the protagonists.


"Character is the prime number, the irreducible element in literature, and the effective creation of character is the ultimate standard by which all fiction must be judged."

So, for instance, Axelrod posits that Deighton's claim to a position in the pantheon of literature stands or falls on the values and sensibility of the middle-aged, betrayed and sometimes out-thought character of Bernard Samson. Samson's development and role is contrasted with that of L.G. Darley, the lead character in Durrell's novels. And it is the interaction of these main characters with the other characters in the novels which determines how the reader ultimately judges them. Take this interesting section from the posting, on Samson's relationship with the other (main) characters in the trilogies:


"With the densely populated world of friends, colleagues and family that Bernard inhabits, a whole thesis could be devoted to the way Deighton delineates their personalities and relationships: Werner Volkmann, the old school friend who pines for a job with the SIS, shrewd and nostalgic, tough and hen-pecked; his conning wife Zena; Frank Harrington, the fatherly Berlin Resident and old friend of Bernard’s father who lives like a lazy king, playing Duke Ellington records and having affairs with younger women (including Zena); Bernard’s imperious father-in-law David Kimber-Hutchinson, who despises Bernard and schemes to take custody of his children; David’s other daughter Tessa, a free spirit sacrificed brutally during the rescue effort that brings her sister out of East Berlin; Tessa’s husband George Kosinki, a used car salesman with the knack for making money who squanders it all in the search for answers about his wife’s death; Dicky Cruyer, the lazy, coffee sipping dandy of the Secret Intelligence Service, fearlessly dodging responsibility and taking credit; his hapless wife Daphne … and on and on. Like any great book many of the characters exist on their own without direct effect on the plot.

Tante Lisl Hennig, for instance, who owns the little hotel where Bernard grew up after the war, who hid Werner Volkmann’s family from the Nazis, who now lives for her afternoon bridge games her ‘naps’ that consist of her favorite schnappes and the obsessive reading of the newspapers. We see Lisl in her heyday in Winter, married to Erich Henning, Hitler’s pet musician, but her life is just part of the rich background of Bernard Samson’s, the little room at the top of his hotel, his ultimate refuge."

On this last point, is Tante Lisl's role so peripheral to the thinking and character which drives Samson's approach to his wife's defection? I would question this assessment of what we learn in Winter, the prequel to the trilogies, about Lisl's role in shaping Samson's character growing up in Berlin. Lisl's role as confessor and 'mother' in many ways to Berlin, and her role as proxy for the Berlin of Samson's childhood, which left an indelible mark on how he saw his role within London Central, surely are more than just ephemera. Her role in shaping the main character is subtle, but I'm sure intended. Nevertheless, it's an interesting question to ask of some of the supporting characters.

Axelrod's to be congratulated for the writer's perspective he brings to this analysis of Durrell and Deighton's works, and it's a pity I didn't pick this posting up when it first came up. I (shamefully) haven't read any of Durrell's fiction works before, so that's all the more reason to pick up a copy and see how comparing the two major novels offers up a new perspective on Deighton's work.
Posted by Deighton Dossier at Thursday, March 10, 2011 4 comments: Links to this post