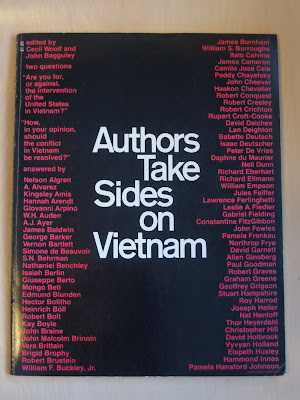 Back in the 1960s, the Vietnam War was the Cold War equivalent of today's conflicts in Iraq and Afghanistan: American-led, hugely-divisive, expensive (in terms of money and lives on both sides), multi-national and contextualised - certainly on the American's side - as part of a wider geopolitical struggle. In the case of Vietnam, this was the effort to prevent the domino effect of south east Asian states toppling to communist rule. Vietnam was a major topic of debate and discussion by the elites and the wider public in the sixties, but one conducted in an era of communications before the Internet when debate was dominated by the printed page. It was a polarising conflict.

I recently came across a fascinating snapshot of contemporary opinion on Vietnam in a book entitled Authors Take Sides on Vietnam, edited in 1967 by US literary editors Cecil Woolf and John Bagguley. Prompted by the example of W H Auden in 1937 -  who invited one hundred and fifty British and American authors to say whether they were for or against the Republican government in Spain during the Spanish Civil War, and published the results in a pamphlet Authors Takes Sides on the Spanish War - these two writers repeated the process with Vietnam, seeking opinion and viewpoints from many of the leading literary figures of the day. Each contributor was asked two simple questions:"Are you for, or against the intervention of the United States in Vietnam?" and "How, in your opinion, should the conflict in Vietnam be resolved?"

Len Deighton is one of those who gave his opinion in this book. His entry is reproduced below:

"The US intervention in Vietnam was neither benign nor clever. The present situation is morally wrong as well as exceedingly dangerous, but it would be a mistake to imagine that there is now any lasting solution that would be quick or easy, or one that can be described in a few words. There are men of bad will on both sides who wish the war to continue and public statements by individuals or groups often cynically utilised by such men. Antiwar sentiments of an oversimplified, ingenuous type can have the reverse effect of the one intended."

But Deighton's is only one of more than a hundred and fifty other voices from the cultural voices of the 'sixties, many of which are far more black and white in their expressions of support or disdain for the conflict. There are some fascinating contributions in the book from famous western writers: some tremendously insightful, some incredibly näive and misguided.

Graham Greene, for example, opposed the war and dismissed the link to an international communist threat: "The excuse of containing communism assumes that communism everywhere is evil. Anyone with any experience of Vietnam knows this is not the case."

Philosopher Bertrand Russell took a firmer stand, his comments echoing many of the sterner critics of George W Bush's foreign policy: "I regard the policy makers in Washington who preside over both the aggression and the atrocity to be war criminals, in the precise send laid down at the Nuremburg trials."

Daphne du Maurier, on the other hand, offered up a refreshingly straightforward and no nonsense response, as a novelist, to the realities of Cold War geo-politics: "Although I am in principle against the intervention of the United States or any other power in the war in Vietnam, I do not feel I am sufficiently well-informed on the subject to make a statement." (If only some of today's celebrity commentators were so self-aware!)

Poet Kathleen Raine too was equivocal: "I think America must hold the frontiers against communism, and Vietnam is at present the scene of a conflict which might become a great deal worse if America were to withdraw."

Fast forward to today. Replace Vietnam with Afghanistan and it could be argued that this range of assessment is broadly similar to what one would find today. Afghanistan has become a proxy for a wider political debate - particularly in the US - around the idea of a new cultural conflict between West and East, but this time the East is the East of Islam. Islam has replaced communism in much of the media discourse in the US as the archetypal 'other', the external threat to the status quo. But unlike the Cold War threat from communism, the 11 September attacks in 2001 and others since showed the potential for a 'hot' war of low-level conflict close to home. While al Qaeda may be seeking the destruction of the west, in the terminology of Cold War systems analysis its battle with the West is assymetric in the extreme.

The Afghanistan and Iraq conflicts and the fight against the indicated threat from global terrorism too have attracted comment from writers, much like in the above book. Martin Amis, for example, in his book The Second Plane tackled the nihilism of the Islamist death cult and the threat facing America; Christopher Hitchens, while no friend of George W Bush, in the last decade became a vociferous and brilliantly incisive polemicist on the new global war, defending the principle behind the toppling of Saddam Hussein and taking issue with the cultural relativists who seem immune to the realities of life under the middle ages sensibility of the Taliban or the experiences of ordinary Iraqis under Saddam. Hollywood actors too like Sean Penn and Martin Sheen have been vocal opponents in the press and on TV of America's position.

What has changed is that the Internet has made volumes like Authors Take Sides on Vietnam largely superfluous in the modern age. Now, through global media, opinions are instantly communicated and with the explosion of blogging and social networking, everyone seems to want to express that opinion. Perhaps Facebook or Twitter is now the modern equivalent of the anti-war pamphlet? Opposition to the war can be expressed directly, instantly; it does not require an editor to collate and present it in book form months later. Commentary has been democratised. Whether this has improved the quality of the discussion within the political elites or among the cognoscenti, however, is debatable.

Did these interjections in the sixties from the artistic elite make any different to the course of events? Difficult to say, but clearly those who saw their job as making sense of and portraying the world around us - in fiction or non-fiction form - clearly felt the urge to contribute to the wider public debate. That is still valid now.

As an interesting postscript to this story, Deighton did in the 'sixties contemplate writing a spy thriller novel around the Vietnam theme (aside from Berlin, Vietnam was the other obvious totem of Cold War tensions in the sixties and seventies). However, the closest he got was a short story called 'First Base' in his collection of 12 short stories based around military themes, Declarations of War. The story follows two solders, Dutch and Des, who discover an abandoned US air base in the Vietnamese jungle full of stores meant for the conflict. After crashing their track on the base, Dutch is seriously injured, and the two men must wait in the base for what they hope will be their eventual rescue. It is fascinating to contemplate what a Deighton Vietnam novel would have turned out like - Harry Palmer in the jungle, or something more akin to Mamista?
Posted by Deighton Dossier at Saturday, December 26, 2009