The reissues (6) - Horse Under Water 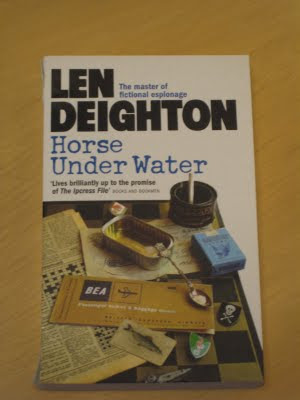 I've been a bit tardy in following up on my plans to review the next four of the new reissues by Harper Collins of Len Deighton's first four novels. So, to rectify that, here's the spec on the new edition of his second ever novel, Horse Under Water, the only one of the Harry Palmer novels not filmed (more's the pity).

The new introduction
The story is, unlike The Ipcress File which precedes it, a less familiar part of the popular culture of the sixties thanks mostly to the aforementioned lack of a film adaptation (as a result of the lacklustre reception to the - in my opinion rather good actually - Ken Russell film of Billion Dollar Brain). Nevertheless, Deighton repeats the successful formula of the 'Harry Palmer' series in this book, which transports our working class, sardonic, wise-cracking un-named agent to the shores of Salazar's Portugal, where he finds a heady cocktail of hard drugs, money and neo-Nazis.

In his new introduction, much is - in fact - well, not new. More....recycled. Many of the anecdotes are familiar to those who have the 25th anniversary editions, but re-told and re-worded. Deighton in his publicity and his retelling of his career is wont to repeat old favourites, shall we say. Perhaps, in retirement, one can forgive the old man the chance to embellish, rather than start from scratch!

Deighton recalls how his decision to use a sunken submarine as a central motif sprang from his lifelong love of military machinery (about which he has written extensively). So, here he re-tells the tale of his time spent in the Imperial War Museum looking at newly released German maritime records on advances in undersea warfare, and spending so much time with them he ended up cataloguing them. He goes on: "At the time, I had no idea that the notes I made would be used for anything other than my interest in history. It was during my stay in Portugal [on holiday], when I was asking local people about German activity there during the war, that I recalled all that underwater material. The book's plot fell into place and I started writing."

In choosing to use again the unnamed character from his first novel, Deighton recalls that he recognised then the advantages that could bring him as an author. Again, a subject touched upon in his previous commentary on the book, but here with some subtle changes: "I had not named the hero of The Ipcress File. A Canadian book-reviewer said it was symbolic and pretentious but in fact it was indecision. Now, writing a second book, I found it an advantage to have an anonymous hero. He might be the same man; or maybe not. I was able to make minor changes to him and his background. The changes had to be minor ones for the W.O.O.C.(P). office was still in Charlotte Street and Dawlish was still the hero's 'chief'. There were very few modifications but I realised that (although Deighton is a Yorkshire name, and I had lived briefly in the city of York) identifying him as a northerner would make demands on my knowledge that I could not sustain. It would be more sensible to give him a background closer to my own." There are, certainly, in a thorough reading of the character, autobiographical elements of Deighton which come through.

Finally, he writes about his - now legendary - approach to researching the subjects of his novels and getting as much practical as well as historical knowledge under his belt: "Having no underwater skills, knowledge or experience, I went to the Royal Navy and asked for help. Everyone at the Admiralty was one hundred per cent helpful. They sent me to the Royal Navy's diving school and this experience is described here more or less as it happened. It was only when I was half-way through the course, and up to my neck in water on the ladder of the diving tank, that I confessed I could not swim. They were shocked and apprehensive about it on my behalf, but as I said: 'What is the point of wearing all this scuba gear if you can manage without it?'"

The design
Continuing his chessboard theme set with the first novel in this series, Arnold Schwartzman OBE RDI again presents a fascinating smorgasbord of ephemeral items, each of which points to a story motif. So, on the front cover the readers finds a cornucopia of clues which whet the appetite. A tin of sardines (empty) represents the Portuguese coast, as does a cigarette card of said sardine. But, as Schwartzman notes: "Finding a contemporary, key-opened Portuguese sardine tin became virtually impossible. Discovering the illustration of a sardine on a cigarette card and crested souvenir spoon form Lisbon became much easier, thanks to eBay!"

As he has told me in correspondence about these designs, much of his time was indeed spent sourcing numerous items from around the world, in his search for authentic items which would capture the sixties feel he wanted in the design. The 1960s Times newspaper, open at the crossword, links to the fact that the protagonist is regularly completing such a puzzle; indeed, in the sixties, first editions of the book came with a laid-in crossword puzzle which readers could solve based on clues in the book.

As with the four other books in this reissue series, the spine image is of a postage stamp which picks out a core theme in the book. On this cover, it is a U-Boat. On the back, there is another nautical clue. As Schwartzman explains: "The group of cigarette cards on the back of the cover spells out in semaphore K.U.Z.I.G. and Y. The nautical interpretation of these letters is referred to in the book as 'Permission granted to lay alongside.'"

A fantastic cover worthy of sitting alongside the original Ray Hawkey cover from the sixties, I think. Schwartzman put a significant amount of work into this commission from Deighton, and it works in making the novel appear contemporary to the average book browser, even though the story is now over forty years old.

Email ThisBlogThis!Share to TwitterShare to FacebookShare to Pinterest
Labels: Horse Under Water, Reissues