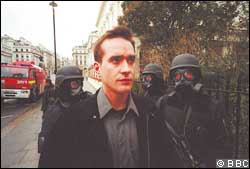 I draw readers' attention to an article in today's FT newspaper by TV producer John Lloyd about the continuing appeal of the BBC One 'spy' show Spooks. I watched the first few series with Matthew Macfadyen, but I'll admit to having not watched the last few series. It's sometimes hyped as a British '24', and does adopt the same fast paced, multi-perspective presentation.
With the show coming back for an eighth season, this article is an interesting look back at how the show has developed since its inception in the post 11 September world we now inhabit. Lloyd's contention is that Spooks - with its fast pace, technology to the fore, action, strong female characters, at times soap opera-ish personal sub stories - was very much a spy fiction of its time: "When Spooks first aired in May 2002, it was regarded as a child of 9/11, just as John Buchan’s spies were children of the early 20th-century German threat, or Len Deighton’s and John le Carré’s of the cold war."
It has attracted its share of knockers. Some critics have complained that, with episodes about Mossad agents, anti-abortionists and vivisectionist terror threat it's often ignored the terrorist elephant in the room - the modern Islamo-fascist threat in the UK evidenced on 7 July. Then again, others have praised its focus on the relationships between the agents and the impact that secrecy has on individuals' capacities to relate to each other and leave behind the shadowy world in which they operate when they close the front door. It's also seen as bringing the spy story up to speed for a new generation hooked on Facebook, not Funeral in Berlin; Twittering instead of reading.
Very interested article, which portrays well a show which is of the post-ideological world where threat is as much emotional and non-rational as it is political and tied to any particular state structure. The agents in Spooks combat a chaotic threat in a chaotic world.
Posted by Deighton Dossier at Saturday, October 17, 2009