SS-GB - Waterstone's 'crime' thriller of the month for September 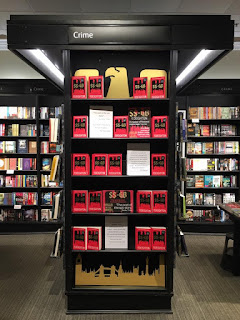 As this image shows, Waterstone's is making a big push for the new paperback edition of SS-GB as their 'thriller' of the month (although this store got the location wrong, and put it in crime).

I was asked to write a short introductory piece about the book, and its link to Len's other 'historical' novels, for the Waterstone's customer e-update, which went out recently. They only used a short quote from it, so I'm sharing the full text below.

The book is likely to sell well again next year, when the BBC series is launched, in the early spring season on BBC 1. Front cover looks stunning on this new edition.

Read the full article below.

SS-GB: Len Deighton and a passion for authenticity

The much-anticipated BBC mini-series SS-GB has thrown a welcome spotlight back onto one of the UK’s most successful novelists.

Len Deighton is now 87. His last novel - Charity - was published 20 years ago, so it’s easy for readers to forget he wrote some of the most memorable spy and thriller novels of the last century.

They can do no better than starting with SS-GB. It is one of the outstanding counter-factual history novels, ranking alongside Philip K. Dick’s The Man in the High Castle and Robert Harris’ Fatherland.

SS-GB is a tension-filled story with a chillingly believable premise - what if the Nazis had won the war?

The hero, policeman Douglas Archer, is close to power and his job means he gets caught up in the power struggles between the different elements of the occupying forces, and in doing so uncovers a sinister secret.

SS-GB provides Archer within familiar police procedural elements: a whodunit story arc, the gathering of evidence, the investigation of suspects. The excitement for the reader is these tropes take place in a frighteningly realistic place: occupied London. Published only 33 years after the war ended, there would have been plenty of readers for whom this fictional scenario was a frightening near-miss.

Anthony Burgess wrote once that Deighton’s “passion for researching his backgrounds gives his work a remarkable factual authority.”

His occupied London showcases the everyday realities of a defeated city. Gestapo checkpoints in Whitehall requiring Londoners to show their papers. Wimbledon Common covered with ‘Achtung Minen!’ signs left behind by Royal Engineers defending Putney Hill against a Panzer attack. It is these embellishments which transform what is in many ways a conventional, detective-led mystery into a believable historical thriller.

Nothing was overlooked in the development of the story.

Music of the action takes place in Old Scotland Yard. Long since abandoned by the police, Deighton found people who knew the building from top to bottom, ensuring that his characters interacted with the location in a realistic way.

The dialogue between Archer, his colleagues and their new Gestapo overlords accurately captures the everyday process of police work at the time, thanks to Deighton’s extensive engagement with Metropolitan Police archives.

This search for authenticity stretched to the book’s marketing.

Cover artist Ray Hawkey created a book of British stamps with Hitler’s profile replacing the Queen’s, as publicity material for the launch. So authentic were they, some experts were fooled: Stamp magazine believed they were produced either as propaganda "or for some other more sinister purpose.”

SS-GB itself came about as a result of Len Deighton’s research into an earlier book, Fighter, his account of the Battle of Britain. The information he gathered about Operation Sea Lion (the Nazi’s plans for invading the UK) was the foundation for SS-GB.

Deighton also applied his passion for detailed historical research to other novels set in wartime, not least Goodbye Mickey Mouse and, famously, his wartime blockbuster, Bomber. This is packed to the gills with authentic details of the daily lives and experiences of British Lancaster bomber crews, gained through painstaking research into the minutiae behind Bomber Command’s raids across Germany and, crucially, access to those who undertook the real thing.

It is Deighton’s capacity to generate believable environments for his characters which encourages readers to identify with them and buy into a story.

SS-GB will have you believing Nazi tanks really did roll up Whitehall!