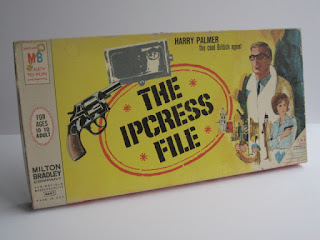 In 1965 Milton Bradley (MB) Games in the US bought out a board game based on The IPCRESS File, clearly hoping to ride on the coattails of the commercial success of the movie in the cinemas in the US. Images from the film's marketing materials are used - presumably under license - and on the box is the legend: 'Harry Palmer, the cool British agent'.

It is difficult to determine their target audience. The movie was aimed at an adult audience, yet the game is marked as 'from 10 to adult'. It is a bit of a stretch to imagine many adults playing the game as it is incredibly simple and lacking in sustained interest. In form it is a simple chasing game, with players picking up orders and enacting them through dice rolling and movement. Up to four players move around a board which features representative scenes from the film complete with recognisable characters of Harry Palmer and Dalby and Ross. Players are gven spy assignments, but one player secretly becomes a double agent. Those around the table are required to solve their assignments so that they can identify the double agent. Any player who knows who the double agent is then 'licensed to kill' the double agent and thereby win the game. Simple as.

Of course, to a collector one of the attractions of a game like this is not the game itself but, given the fate of most board game is to end up in charity shops or on the sum, their rarity. That in itself is of value to a collector, along with the sheer curiosity factor. The design of The IPCRESS File box and game is of interest as it clearly by the same artist who produced the cinema poster and bill campaigns for the film in the US market. This is evidence the the board game rights were clearly an integral part of the studio's overall marketing campaign for the film in the 'States.

However, no such games were produced for Funeral in Berlin or Billion-Dollar Brain, which suggests either the game was a complete failure, or the marketing people at the studio were looking to target a more mature audience through more traditional marketing means.

Beyond collecting books and films, for a fan of any particular genre or character, the ephemera - the items which float around in the outer rims of the character galaxy, so to speak - offers then new sources of interest, particularly as favourite characters and themes are played out in new forms of media.

The IPCRESS File board game follows in path of a number of games which have a clear espionage link; indeed, some of the most famous spy fiction characters have appeared in cardboard and plastic form.

James Bond, for example, appeared on a famous board game published by MB games during the sixties which came out alongside some of the early films: the James Bond Secret Agent 007 game of 1964 was the first of many tie-ins around the film series, and was produced when only three Bond films had been released. Clearly there was enough popularity surrounding those early films to justify the move into gaming marketing. It has been re-released and updated at certain points, and now demands serious money from collectors for a good copy.

MB also produced games tied to specific movies : Thunderball from 1965 follows on from the release of the generic Bond game, and is the first specific film-based game; Goldfinger appeared in 1966 and the action follows themes in the film, your objective being to capture Goldfinger, who's hiding out in Fort Knox. These games are simple roll and move games, where the players' pieces capture other gamers' and have to undertake missions managed through simple card instructions. The main link to the film - as is the case with The IPCRESS File game - is in the attractive box packaging, which contains scenes recognisable from the films which were intended to attract adults and children who had seen the film, and wanted to enact the scenes themselves. Whether the reality of the game play matched their expectations is another matter! More contemporary is Scene It?, a film trivia game which is linked to a DVD of clips from the films. 007 has also appeared on playing cards.

Bond, of course, has also made the obvious leap from screen to computer game console over the last twenty years, the most recent example being the re-imagining of James Bond Goldeneye, which was a hit on the PS2 when it first came out in the 1990s. But that's probably something for another blog post; the closest Len Deighton's writing reached in the digital age is the Commodore 64 game Blitzkrieg!

The sixties were a golden period for TV and film-based spy characters and series, and this is reflected in the sixties being a boom period for board game. So the characters from the original Mission: Impossible TV series made it to cardboard. The New Avengers, not strictly spies I guess, also made it onto the toy shelves in the same decade with an eponymous game. The Man from U.N.C.L.E. was a major sixties hit and not surprisingly, it was also produced as a board game tie-in to tap into the demand from fans to re-enact the missions outside of the broadcast schedule. This blog post carries some more detail about what the game involved.

More broadly, a little Internet-based research has thrown up a number of generic spy-related board games, few of which I've heard of but which sound intriguing: Vienna (naturally, a centre of the spy world in the fifties and sixties in Europe), Conspiracy (what else!) and Inkognito, which draws on the historical world of the spy in the heart of the Venetian Republic.

In 1973, Espionage is one of the more successful games which play on the general interest in popular culture in all things spying, which was a feature of the Cold War period right up until the late eighties. Spy Ring is a contemporary spy game to The IPCRESS File, requiring players to visit embassies placed across the international city of Espiona, the one who collects the most valuable set of secrets being the winner. Thriller writer Robert Ludlum put his name to a Game of Counter-Espionage in 1988, which again plays on the obvious gaming factors of deception and secrecy from your other gamers around the table. Spy Ring was the entry into this increasingly burgeoning market from Waddingtons, the UK game maker which was in a perpetual game of catch up with its much larger US competitor, MB.

The attractions of the spy-related board game to makers are clear. It introduces elements of mystery, detective work, outwitting your friends around the table and keeping secrets. Most involve the elements of chance (dice), movement around the board, and missions and objectives for each player, all of which encourage repeat play and repeat association with the theme and brand and, presumably, repeat custom at the box office or on the TV screen.

This webpage, and the website Board Game Geek, both have more information on each and links on these and other games. If you've played any of the games mentioned, or can recommend to readers any other games of interest, do put up some posts below.
Posted by Deighton Dossier at Monday, January 02, 2012