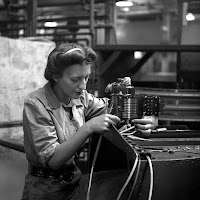 Len Deighton's Bomber is being broadcast this afternoon on BBC Radio 4 Extra, in real time, according to the BBC's Blog, to mark Armistice Day, today.

For those of you not familiar with this work, it's significant because Bomber covers 24 hours in the life of a crew of a Lancaster bomber involved in a failed raid over Germany. The key to the original radio version by the BBC is that when broadcast, in the 1990s, it was done so in real time - i.e. in sections across 24 hours - so that when time references were made in the play by the characters, they corresponded to real life!

The tension, according to the writer of the Radio 4 Extra blog, is real!

Check out the link here for more information.
Posted by Deighton Dossier at Friday, November 11, 2011