On the road and on the T 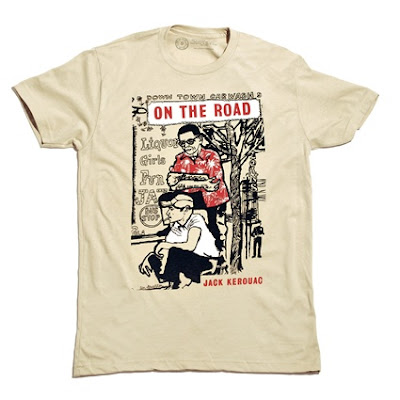 I've found an interesting new philanthropic effort by a company called Out of Print, which produces t-shirts with illustrations from famous book covers now out of print.

Out of Print celebrates the world’s great stories through fashion. Its shirts feature iconic and often out of print book covers; some are classics, some are just curious enough to make great t-shirts, but all are striking works of art. They work closely with artists, authors and publishers to license the content that ends up in our collections. The nice thing is that for each shirt they sell, one book is donated to a community in need through our partner Books For Africa. So, it's not only a great gift but you make a worthy donation to improving literacy and education in Africa.

One of the items they have for sale is a t-shirt with Len Deighton's 1958 cover for André Deutsch of the UK edition of Jack Kerouac's seminal On the Road. As most readers are still not aware, before becoming a writer of note Len Deighton was a respected artist and illustrator, part of the fifties new wave in British design (along with the likes of Peter Blake, designer of The Beatles' Sergeant Pepper's Lonely Hearts Club Band) breaking from convention in design and adopting changes like bolder use of colour, abstract, print and other new modes of illustration.

This famous cover - a top seller in poster form - is redolent of Deighton's style, with the blocks of simple colour, the heavy black outlining and the jerky, sketched nature of the drawing. Deighton went on to produce at least 40 other cover designs for André Deutsch during a period when the publishing world was moving away from simple designs to more complex covers. In 1962, with the publication of Deighton's own The Ipcress File, his designer friend Raymond Hawkey defied publishing convention with the first book cover with the majority of it white; up till then, covers had never been produced in white as booksellers found that they became dirty after being handled by customers.
Posted by Deighton Dossier at Saturday, February 13, 2010

Email ThisBlogThis!Share to TwitterShare to FacebookShare to Pinterest
Labels: design, Jack Kerouac, On the Road