More great British thrillers get a new lease of life 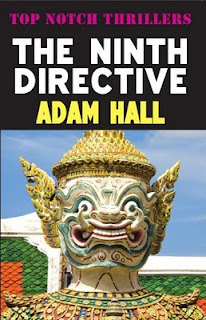 Mike Ripley, thriller writer and editor of the excellent Shots online magazine about British thriller, crime and espionage writing, has sent out news of more developments by new imprint Ostara Publishing, which is specialising in putting back out on the market long-forgotten British thrillers with the aim of attracting a new generation of readers.

Ostara is issuing four more titles in their print-on-demand Top Notch Thrillers series. Ripley set up this new company to, he says, "revive Great British thrillers which do not deserve to be forgotten”. The new titles, originally published in Britain between 1962 and 1970, were selected by Ripley, who is the series editor for this new imprint.

The Tale of the Lazy Dog by Alan Williams is a heist thriller set in the Laos-Cambodia-Vietnam triangle in 1969 as a mis-matched gang of rogues and pirates attempt to steal $1.5 billion in used US Treasury notes. Time Is An Ambush is a delicate, atmospheric study of suspicion and guilt set in Franco’s Spain, by Francis Clifford, one of the most-admired stylists of the post-war generation of British thriller-writers. A Flock Of Ships, Brian Callison’s bestselling wartime thriller of a small Allied convoy lured to its doom in the South Atlantic, was famous for its breathless, machine-gun prose and was described by Alistair Maclean as “the best war story I have ever read”. The Ninth Directive was the second assignment for super-spy Quiller (whose fans included Kingsley Amis and John Dickson Carr), created by Adam Hall (Elleston Trevor) and is a taught, tense thriller of political assassination which pre-dated Day of the Jackal by five years.

Of these new reissues, Mike Ripley says: ‘Our new titles are absolutely in line with the Top Notch ethos of showing the range and variety of thrillers from what was something of a Golden Age for British thriller writing. They range in approach from slow-burning suspense to relentless wartime action and feature obsessive, super tough, super cool spies and some tremendous villains. Above all, they are characterised by the quality of their writing, albeit in very different styles.

‘When first published, these titles were all best-sellers and their authors are among the most respected names in thriller fiction. Many readers will welcome these novels back almost as old friends and hopefully a new generation of readers will discover them for the first time.’

As a critic and editor of the Shots website Ripley has shown that he has an eye for understanding what readers are interested in and the potential for injecting new vigour into the British thriller genre by drawing on the lessons of the past. These new books sound pretty cool, and I'm sure readers of this blog would want to check them out.
Posted by Deighton Dossier at Sunday, February 28, 2010