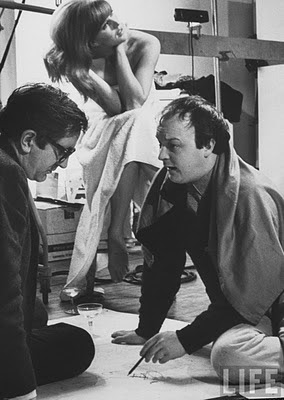 Just been watching a very interesting documentary on BBC Four tonight about the photographer Brian Duffy, entitled The Man Who Shot The 60s.

Duffy was one of the figures of swinging sixties London, a fashion photographer who along with David Bailey and Terence Donovan was one of the "black trinity" of photographers who helped make London and Soho in particular the centre of the fashion and arts worlds. Duffy worked for Nova, Vogue, Harper's Bazaar and The Sunday Times. Famously, in the seventies Duffy destroyed all his negatives.

Duffy was an art school friend of Len Deighton and took a number of publicity shots of him as he became famous following the publication of The Ipcress File. They both shared a connection with photography, Deighton having learned photography as part of his work in RAF intelligence during National Service. The photo on this blog post is from a Life article 'Hot Spy Writer on the Lamb' from 1966, and shows Duffy with Deighton explaining his approach to taking shots for a fashion shoot. Writers dropping in on film shoots for glossy magazines sort of sums up Soho in the sixties, really.

Duffy and Deighton's connection extended further into showbusiness when, as Duffy recounts on the documentary, he and David Bailey went to see Oh! What a Lovely War at the theatre in London. Duffy was overcome by the play - "I was in tears" he says - and decided that they should make it into a film. As I've covered on the Deighton Dossier website, Duffy and Deighton set up the Accord Production company, which purchased the rights to the film and recruited Richard Attenborough to act as director. However, the production was pretty difficult by all accounts and Bailey recalls how, quite shrewdly, he sold his share in the production to Deighton for £49 for an easier life. The film was Attenborough's first directing role and, while he went on to great fame and worldwide attention, he proved a handful for the fledgeling producers. Duffy refers to him in the documentary as "unctious"! The shooting of the film was traumatic and stressful, leading Deighton to take his name of the production credits, though Duffy kept his credit. The film was an artistic success.

Deighton, Duffy and Attenborough had first worked together on the film adaptation of Only When I Larf, on which Duffy had a production credit. What comes across clearly in this documentary however is that on their second time working together, Attenborough was already showing signs of being an awful 'luvvie' and evidently put Duffy right off further adventures in film!

Brian Duffy recently had a major retrospective exhibition of his works in London, which was covered on his blog. He certainly created some of the sixties' most iconic images .

The programme will be rebroadcast a number of times over the week on BBC Four and should be available on iPlayer on the web for the next week. A real slice of sixties' London to watch out for.
Posted by Deighton Dossier at Wednesday, January 13, 2010