While globally he is known for his spy fiction and as one of the premier spy fiction writers of the twentieth century, Len Deighton also demonstrated his status as something of an auto-didact and polymath, having commercial success in the fields of cookery - his Action Cook Book for example was picked by The Observer a few years ago as one of the top cookery books of the century - and history, particularly military history.

Research in the British Library archives recently - specifically, further highlights from rummaging around The Bookseller archives - threw up some interesting examples of how the books were marketed to the trade and how his publishers, and booksellers, cross-marketed his status as an established fiction author into the non-fiction market.

Len Deighton was not a trained historian; indeed, he left school and went pretty much straight into National Service (having been too young to be called up in World War Two) in the RAF, flying as a photographer in RAF intelligence. So, its perhaps understandable that he developed here a love of flying and aeroplanes, and an interest in military history.

While not a professional historian, he became a particularly effective amateur one. What seems to have been essential to the publishing success of Deighton's history books - especially Fighter: the true story of the Battle of Britain; Blitzkrieg; Blood, Sweat & Tears; and Battle of Britain - was playing up the same secret of his success for his fiction work: diligence, attention to detail, months (even years) of background research, and a capacity to tell a complex, multi-layered story with multiple characters, that he had developed since the early sixties through his fiction.

Clearly, being an internationally famous spy fiction author of top rank was helpful to Deighton in opening doors and giving him access to the people who could best tell the story (those who had fought), not just on the allied side but on the German side too. I think that see-both-sides aspect to much of the history that Deighton wrote does make for a more balanced and comprehensive understanding for the reader of why things happened the way they did, which ultimately is what you want as a reader from any history book. 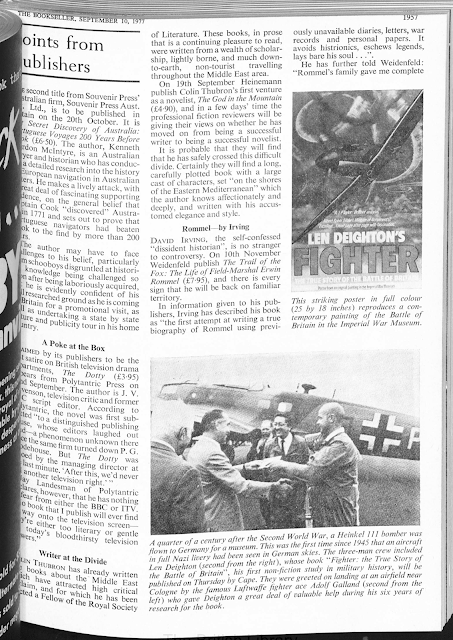 This image and caption from 1977 (lower right) - in The Bookseller - is from a flight in a Heinkel bomber undertaken by the author as part of his research for Fighter: the true story of the Battle of Britain. What's interesting is what you read in the caption: first, his international renown gave him access to Luftwaffe aces who could give him first hand feedback on the; and second, that there was six years of research behind the book.

That's reflected in many of the reviews the book got, such as the review "In their flying machines" by the late Clive James, in the New Statesman:


"The weakness of Bomber lay in its characters. Deighton invented a representative battle and staffed it with what he fancied were representative types. Actually they weren't as clumsily drawn as you might think. Deighton is not quite as bad at character as the critics say, just as John le Carre is not quite as good. A book like Yesterday's Spy, one of Deighton's recent fictions, is not only stronger on action than le Carré's later work, but features more believable people. The cast-list of Close-Up is indeed hopelessly makeshift, but the characters flying around in Bomber, though divided up and labelled in what looks like a rough-and-ready way, are deployed with some cunning to bring out the relevant tensions. You could be excused, however, for not connecting them to the real world. In Fighter there is no way out of it. The Battle of Britain really happened. Not just the machines, but the people too, really existed. And Deighton has managed to give the whole event a clarity which it lacked even at - especially at - the time.

According to Deighton (and he is very likely right) the Battle of Britain was never won, but there was sufficient reason for triumph in the fact that it was not lost. Dowding's whole effort was to ensure that Fighter Command should survive as a force. He could not realistically hope to destroy the Luftwaffe, but on the other hand he could hope to go on denying it command of the air, thereby rendering invasion impossible. Dowding was a percentage player. He was under relentless pressure - especially from one of his own immediate subordinates, Leigh-Mallory - to gamble his strength in mass actions. He resisted the pressure, guarded his resources, and fought a protracted battle with great patience as well as consummate skill and daring.

Fighter would be valuable if it did nothing more than help correct the popular impression that Leigh-Mallory's "big wing" theory was a possible alternative to Dowding's penny-packet tactics. The big wing theory was widely publicised after the war in Paul Brickhill's best-selling biography of Douglas Bader, Reach for the Sky. Even retrospectively it is an appealing notion, and at the time must have seemed like simple common sense to the pilots of Leigh- Mallory's 11 Group, kept in reserve by Dowding's order until the battle was almost over. Bitterly frustrated, they could be forgiven for thinking that if they swooped en masse and shot down a whole raid the Germans would throw in the sponge. But Deighton has the facts and figures to prove that Dowding couldn't take the risk. If his number of trained pilots fell below a certain point, there could be no making up the loss. So he set his face like flint against the rage of his own young heroes. In the long run (or, rather, the disgracefully short run) that was probably one of the things which cost him his job."


Of course, that's six years (approximately from 1971 to 1977) during which time not only was Deighton researching one of the definitive stories of the Battle of Britain; he was also writing and successfully publishing:


And, one would imagine, also making notes for other history books and novels. Yet having multiple projects on the go in the seventies did not, as evidenced by positive sales, result in any evident diminution of quality. His publishers, Cape, must have seen significant sales potential in this new output from their author, judging by the not inconsiderable weeks of marketing behind the book, and the different point of sale and other materials which were produced, to back up their investment.

Of course, in marketing any book, a clear hook or anniversary is always handy for catching the public's imagination and making a sale. So when, in 1980, Jonathan Cape published Battle of Britain - a companion volume to Fighter which was essentially an illustrated history - they played up the fortieth anniversary of the actual battle as part of the marketing and PR push

Here's an example of the advertising that would have appeared in magazines and shops around that anniversary (again, copyright The Bookseller): 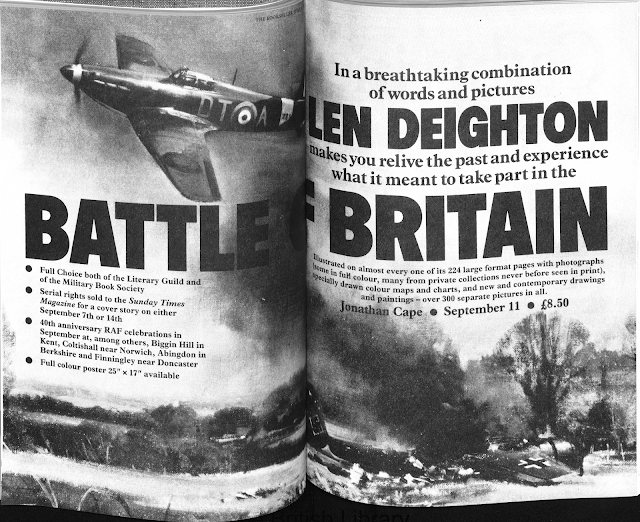 It's a great example of how good marketing covers all the bases and ensures that the public, the potential target consumers - largely, I'd imagine, middle-class people aged maybe fifty and above who remembered the battle - are bombarded with images, reviews, recommendations and stories wherever they look that encourage them to open up their wallets, walk down to the local bookstore (no Amazon in those days, or course) and buy a copy of the book.

You'll see the advert reference advanced serialisation in The Sunday Times magazine. Here's some of the images from that resulting article. The PR is all about reinforcing Deighton as chronicler ad of the battle, but putting the actual men who fought in it front and centre of the story telling at a time when there would have been national commemoration of the battle, and a good many of them were still alive. 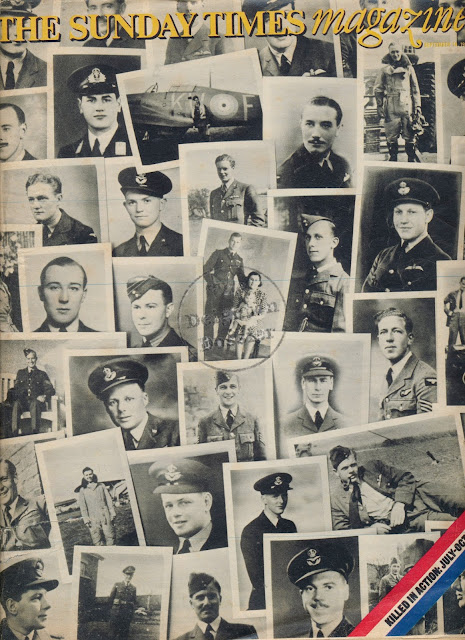 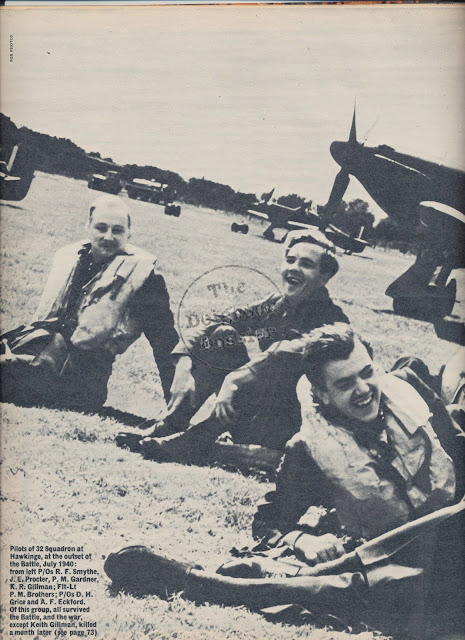 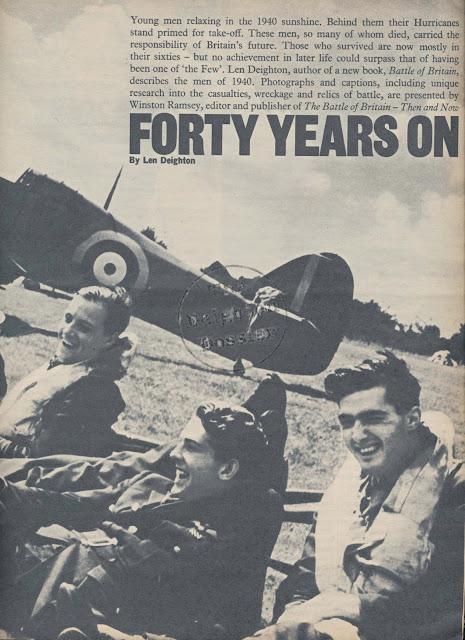 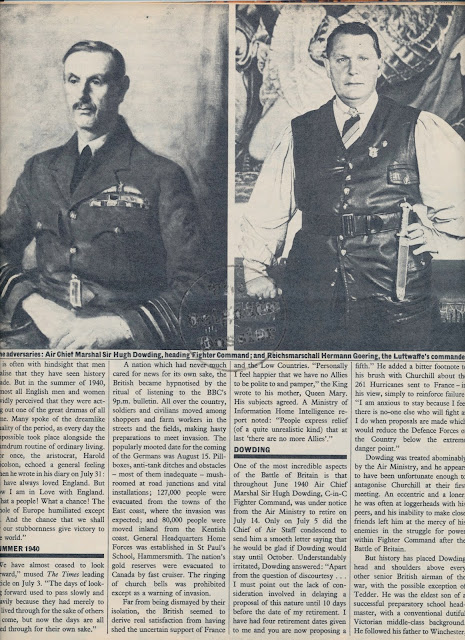 2020 of course, marks the eightieth anniversary of the Battle of Britain. I would imagine that Deighton's publishers are probably considering the chance to re-issue both Fighter and Battle of Britain for that anniversary in new editions or formats, as the reader market will likely be super receptive to any product or book that allows them to learn more about an aspect of British history that's never far from the collective memory.

Email ThisBlogThis!Share to TwitterShare to FacebookShare to Pinterest
Labels: battle of britain, publishing