Been contacted recently about this neat initiative: the Literary Tube Map of London, by In The Book, which is a specialist publishing company that creates personalised books.

They've created their own literary tube map of London, replacing the station names on the popular map with notable literary works that were set in those areas. 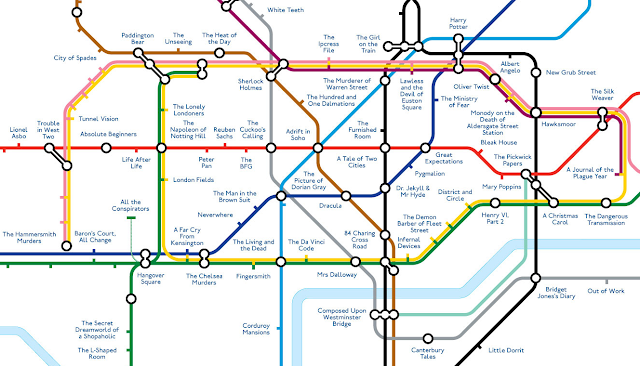 Near the centre of the map, on what Londoners will know is the Hammersmith & Fulham and Circle and Metropolitan Lines on the London Underground, you'll find Len Deighton’s classic first novel The Ipcress File.

Its on these lines where his unnamed intelligence agent - Harry Palmer - begins his mysterious journey in the book. And Len Deighton, of course, was born and brought up in London, near Paddington.

The map shows the geographical mapping of London’s finest works of literature, and it's neat to see which books lie - geographically - near each other. In particular, there are gothic Victorian works lingering on the Piccadilly Line such as Dracula and Dr. Jekyll and Mr Hyde, whereas Sherlock Holmes is iconically located on Baker Street, only a stop away from The Ipcress File.

The Ipcress File is a largely London-based book, even though certain parts of the book take place (or appear to take place) outside of the city. The London Underground map's a classic, and this isn't the first time that someone's re-purposed it to tell a different story. But, it's cool that The Ipcress File has earned a prominent place.

Personally, I'd have put London Match on there, probably somewhere near Westminster Station or Marble Arch. But even though it's not on this map, you can always find the different locations in all nine Bernard Samson novels on this Google Map.
Posted by Deighton Dossier at Saturday, August 03, 2019