A book's cover is essential to its success or failure. The primary aim is to attract the reader, to offer a taste of what's inside, a hint of the subject matter, the ideas and plot twists which they will encounter when the cover is turned.

The book cover has become a modern art form in its own right (check out the excellent Book Cover archive website for a searchable visual database of great book cover design). In spy fiction, readers have recently mourned the loss of Ray Hawkey, who designed the covers not just for many of Len Deighton's books but also of course the famous Pan series of Ian Fleming's Bond novels in the sixties, which arguably transformed the public's awareness of and fascination for the series and set a tone style that was mirrored in the movies.

Len Deighton was a book illustrator prior to becoming a full-time writer, working with André Deutsch and Penguin (there are many examples of his covers on the main Deighton Dossier website). So strongly does he feel about the importance of good design to his books that he is one of the few authors to have specific clauses in his contracts about the use of fonts and aspects of the cover design.

Naturally, when Harper Collins reissued many of Len's books marking his eightieth birthday, he wanted a designer who knew him and his stories well and who understood perfectly the role of cover design in influencing the reader. Arnold Schwartzman, his friend and internationally recognised designer, was the man he chose to design all the new covers.

As I've covered in this blog since the reissues have been released, Schwartzman's designs have given new purpose to the stories and arguably are the best examples of the synergy between cover and content since Ray Hawkey's original 'rotten apple' cover designs for Berlin Game, Mexico Set and London Match (and improve upon the ill-advised illustrations by Joe Partridge for the first Harper Collins editions of Faith, Hope and Charity).

In its April edition, no 59, Baseline magazine, the design journal, profiled Schwartzman's approach to the Samson series of books in an article called Secret Assignment 1 (harking back to the 'Secret File No. 1' moniker on The Ipcress File). Issue 58 began this series with a look at Schwartzman's chessboard-themed approach to the covers for the first four 'spy with no name' novels, The Ipcress File through Billion-Dollar Brain.

Drawing on some of his text introductions to the new editions, the key design elements from the new front covers are laid out wonderfully against a stark white background.

A couple of pages from issues 58 and 59 are reproduced below; they include a reproduction of the design for the book spine illustration for the Samson novels, made up of torn airline ticket stubs which - when placed side by side in sequence - spell out the name of the protagonist. It will look great on the bookshelf!

Hans Dieter Reichert, the editor, has kindly provided a full reproduction of the article which will be available as a .pdf download on the main Deighton Dossier website in due course. 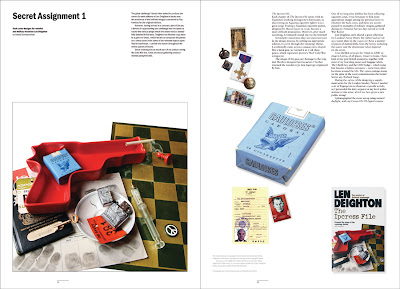 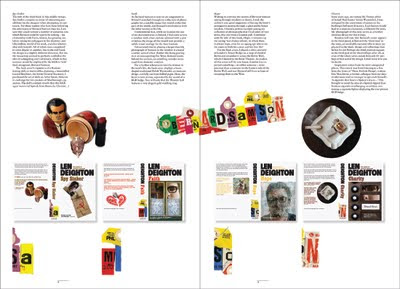 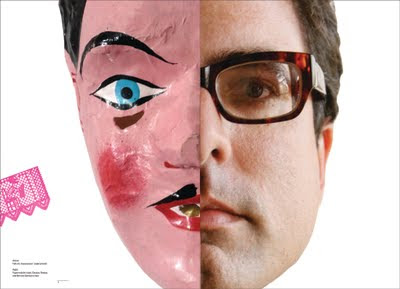