From the BBC archives - Deighton and Bragg 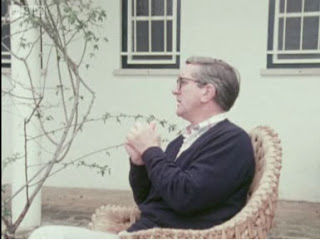 Thanks to eagle-eyed blog reader Nick Elliott I've come across a little gem hidden away in the dark recesses of the BBC's website, in the 'archive' section.

It's an episode of The Lively Arts from BBC 1, broadcast on 18 December 1977 and is one of the very few lengthy to-camera interviews Deighton has given in his life, the other being the The Truth about Len Deighton documentary from BBC4 in 2006. As such, it's an insight into the author's life and work at a time when he was pre-eminent among fiction authors in the UK, following the success of Bomber, and he was becoming equally well-known as a historian with the publication of Fighter: the true story of the Battle of Britain.

The programme is filmed partly in London and party on the Algarve coast in Portugal, where Deighton lived for much of the year (partly for tax purposes in the 'seventies, no doubt). It starts off in biographical mode, referring to Deighton's early 'Dickensian' life from the workhouse to the kitchen to the designer's desk. The first interesting  anecdote concerns the genesis of his first book, The Ipcress File. Deighton emphasises that he came to writing completely ignorant of the process and the expectations associated with being a writer. He wasn't, he says, intimidated by the knowledge of how much work was associated with: "you just sat down and started writing a book and by the weekend it would be finished." He wrote it for amusement and put it aside for a year, finishing the rest of it on his next holiday in France. At the time, he says, he didn't have a strong ambition to be a writer. The nature of the book is, he says, "the most self indulgent book ever written"; it was not written with a view to getting published ... but it subsequently sold over 2 million copies. Deighton seems genuinely surprised in the interview about its success.

What comes across in the discussions is Deighton's unique approach to bringing research to his novels and drawing on the fascinating people he had already met during his life. For example, he talks of the many people he'd met at the time who "had experience of spying" or who covered espionage in the media, and from them he got some fascinating stories. People offered up to him freely with increasing regularity after the publication of his first book. "I attract people who like to talk", he says.

A fascinating interview which has some new insights I've not heard or read in previous media interviews.
Posted by Deighton Dossier at Wednesday, August 18, 2010