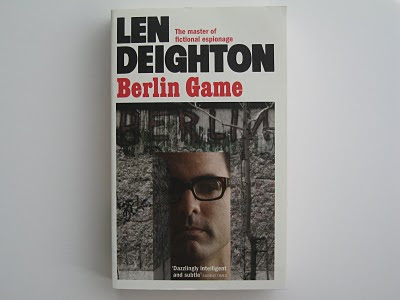 Inspired by the recent newspaper headlines about the activities of (rather poor) Russian sleeper agents in the US, I have started to read again Deighton's trilogy of trilogies telling the story of the ultimate British sleeper agent operating secretly at the heart of the KGB.

Note - if you've not read the novels yet, don't read any further. Plot spoiler clues ahead!

The premise of Berlin Game is simple. Fiona Samson, high flyer in London Central (read MI:6), is married to one-time agent Bernard Samson. Charged with reassuring an unsettled group of agents operating deep in East Germany, he starts to uncover a trail of threads which suggest a mole operating at the heart of British overseas intelligence. And the trails lead eventually to Fiona, who had been operating for six years under the perfect cover: wife of one of the department's most effective and loyal agents.

Fiona Samson was arguably the first and most impactful female spy lead character - though the books are narrated by Bernard Samson, in her intricate eventual involvement in all aspects of the plot Fiona is very much a pivotal character (as revealed in the sixth novel of the series). Giving the lie to the adage that male writers don't generally write good female characters, Deighton's skills at dialogue and creating liveable, believable characters with a well-developed hinterland mean Fiona Samson is utterly compelling as the partner and, at the denouement of this first novel in the series, evident puppet master of her husband's mis-firing career as the extent of her treachery is revealed. All of the supporting characters seem tailor-made for their roles: Tessa, Fiona's sister, the tart with a heart who's innocence is her undoing; Dicky Cruyer, Bernard's manager whose office politics smarts ensure he's promoted beyond his skills, if not his cunning; Bret Rensselaer, the suave American anglophile who Bernard suspects of having an affair with Fiona but who - we learn later - is connected to her in a far more dramatic - and unimaginable - way.

In coming back to this book after a couple of years, what shines through is the rich dialogue, which is the key to driving along the character development and maintaining a pacey plot which does not however read as over-hurried. With Bernard Samson as narrator, the reader gets a perspective on the operation of British overseas intelligence which - as he or she discovers by book six in the series - is definitely shot through the filter of Samson's own prejudices and failings. But I prefer it that way: Samson is an everyman character doing a job for which few are suited. For anyone used to working in an office environment, as I am, his healthy cynicism and distrust of colleague's and management's motives is understandable, particularly when these colleagues and managers are responsible for Bernard's security.

The new introduction
The Game, Set and Match trilogy of trilogies is definitely an ensemble piece, despite eight of the nine books being narrated by the main character, Bernard Samson. With nine books to work with, Deighton had time and space to let characters grow, develop and evolve over a significant time period, sometimes shocking the reader in the unexpected turns their lives take or in the revelations of their past lives:


"The prospect of planning and writing  so many books using the same characters (each of them aging and changing) was both attractive and daunting. They would grow older; perhaps wiser, or perhaps more foolish, or bitter. They would suffer setbacks and ailments; delight, sudden death and despair. And in fiction, as in real life, there was no going back. An inconvenient death in book number three was not something I could rectify in book number four. For all those reasons the writing of Berlin Game, the first book, required more preparatory work than any of the subsequent ones. Here were the people - the foundation - upon which the Bernard Samson stories would be built and balanced."

The intriguing plot twist that Deighton selected for Berlin Game - after some long consideration and always envisaged as part of a trilogy - was to have a spy story in which the wife played a significant role alongside the husband, a combination of the domestic and espionage worlds. He points out in this new introduction that the idea of introducing a strong feminine lead character (not something he'd done up to this point) developed out of a nagging feeling of regret that in Goodbye Mickey Mouse he hadn't made more of the love affair between the main character and his British girlfriend.

In identifying the story arc largely with Berlin, was Deighton unusually prescient in understanding the internal dynamics of the East German economy and political system which would - ultimately - lead to its internal collapse at the first signs of Soviet withdrawal from the East? Certainly, Deighton's frequent visits to East Berlin had clearly revealed to him early signs of a regime built on unsustainable promises and a brutal lie at the heart of it:


"Anyone who spent much time in Berlin's Eastern sector - and the Zone too - could not fail to see that Germany's communist regime was shaky, although shaky regimes repressive enough sometimes continue for a long time. I certainly had no dates in mind but, as I have depicted in the books, there was a weakening of resolve and the regime was becoming more impoverished every day. Fundamentally agricultural, with no exports worth consideration, and a middle class with no income worth taxing, the DDR was a living corpse."

And death, decay and chaos always provides a skilful writer with a fascinating canvas on which to portay a literary vision! In these books, Berlin is the stand-out character. It was then a schizophrenic city, isolated, a magnet for the world's espionage agents and draft drop-outs, whose horizons were always darkened by the clouds of its Nazi past. But its character shone through in characters like Lisl Hennig and Rolf Mauser. Berlin Game takes the reader on a long but satisfying journey that reveals as much about the origins of an epoch of fundamental change in European history as it does the frailty of human and professional relationships.

The new design
There he is on the front cover: Bernard Samson. Or at least, Arnold Schwartzman's new interpretation of Samson. But is it him? Do readers, as I do, detect a throwback to Deighton's first great character [Harry Palmer, as was] in the tortoiseshell spectacles?

Samson's behind the Berlin Wall. It's an obvious starting point for any designer considering Berlin to draw upon the Wall, but the designer also had a personal reason for its inclusion. As Schwartzman writes:


"In November 1989, my wife Isolde and I had the pleasure of being in the German capital at the fall of the Berlin Wall, where I photographed many images of young and old citizens chipping away at the Wall. Along with these I photographed a number of versions of 'Berlin' that had been spray-painted on the wall's surface, as well as the signboard at 'Checkpoint Charlie'. There can have been no more potent symbol of division, or barrier, than the Berlin Wall and it would always be a perfect visual representation of the city of Berlin, where so much of this story takes place.

As Len Deighton's protagonist, Bernard Samson, penetrates beyond the Wall into the Eastern sector I thought I would cut a door into the Wall to symbolise his furtive activities."

This aspect of the design works well, as does Schwartzman's decision to spell out - across the spines of all nine planned reissued volumes in the series - Bernard Samson's name in torn stubs from old-style airline baggage tags. It will look intriguing on a bookcase.

However, I'm torn. I've read these books so many times that I've already built up a solid picture in my mind of what Bernard Samson is like and ... well ... he's not like the picture on the front cover! He's older, certainly; a little more rough-hewn around the edges. So, maybe this aspect doesn't work for me, rather in the way that the first edition covers of Faith, Hope and Charity - which featured photographic images representing key characters - sought to add a visual element to these much-loved characters.

Nevertheless, the design coherency across Berlin Game, Mexico Set and London Match (which I'll blog about at some point soon) is impressive and a worthwhile successor the famous Raymond Hawkey jacket illustrations on Deighton's first four books.
Posted by Deighton Dossier at Friday, July 23, 2010