Below is the second post looking at the article 'A day in the life of Len Deighton' from the August 1963 of Town magazine, then one of London's premier glossy men's magazines. 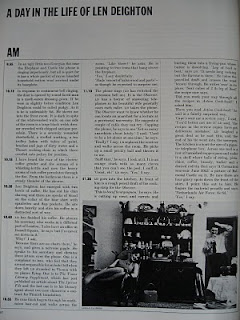 
He works with care but with speed, chopping onion, finely shredding a clove of garlic with cross-cuts and adding half a bottle of Beaujolais before putting the casserole in the oven. I ask him if he ever simplifies the recipes.

'Never,' he says. 'There's no room for invention in French cooking - nor in writing. Compare authentic sources, analyse, test then write it down.' He turns towards the tiny room next door.

'This is the workroom,' he says over his shoulder. He sits down behind a 6ft table and flips a switch on the huge grey tape-recorder. Behind him the bright sun shines on the stony garden. It is midday.

This is a small room painted white, as are all the rooms. There is a large bookcase holding about 250 cookery books, a 19 in TV, hi-fi FM radio and tape-recorder with a pair of Army earphones leading from it. On the chest of drawers there is a large statuette of a Chinese horse and rider and a tall Chinese vase. Across the desk is a profusion of clutter; a stapler, an embosser, boxes of paper-clips, white pain, indian ink, and a bottle of Copydex.

'I couldn't write books without Copydex,' LD says. 'I always take each book to about five drafts. Oh, I know they're still a mess of confusion even then, but by the fifth draft it's my sort of confusion.  I slice out sentences and paragraphs and stick them back in different places, using Copydex - wonderful stuff.'

Copydex is a trade name for a rubber-based glue with a distinctive fishy smell, which was a staple of the classroom in any primary school and could stick any sort of paper, or pasta shape, or piece of string onto paper during 'craft sessions'. Clearly, Deighton started writing in the days before the word-processor; however, he was in the seventies one of the first people in the UK to own an IBM word processor, so his days of using Copydex were already numbered. Given how easy it is for modern writers to edit their text, this reference indicates writing was in the past somewhat of a 'craft'!


The tape-recorder is playing back a talk about a trip to the Black Sea from the Third Programme [Radio 3 as it now is]. LD listens as he opens the morning mail. I ask him if it's not a little late to open the mail.

'No,' he says, 'I always rate it the bottom priority. Sometimes it is two or three days before I get through them and always ten days before they are answered.' As he reads the letters he puts them into three piles: one is to be paid, one is to be answered and the third is gently dropped into a waste basked already overflowing with old newspapers, Radio Times and assorted rubbish.


The talk on The Third is finished. LD has made notes in one of dozens of notebooks. 'I'll erase that now,' he says. 'I use the tape-machine as a way to defy time. That talk was given at a time when I was busy on something else. By taping it I can hear it when it's convenient. I have a time switch so that I can have the whole thing switched on and record something even when I am out.'

'Yes,' I say, 'I like bouef bourgignon very much.'

By 1.0 pm we are driving over Westminster Bridge in a battered 1956 VW. A diesmbodied voice suddenly says 'Blue seven-eight do you read me?'

'Radio phone,' he says. 'The most efficient and pleasant organisation I have ever had dealings with.' He presses the transmit button and replies to the call with lots of 'roger' and 'wilco' and 'over' and 'out'. It is a man on the phone who wants to meet him at three o'clock the following afternoon. In Soho we park in a car-park run by a man named Paddy, who Len Deighton says is one of the nicest people he knows. He says this to me three times.


The Trattoria Terrazza is crowded but our table downstairs is reserved. LS seems to know everyone there including all the waiter who bring him a Campari soda without asking what he wants. There are a lot of people around the table. A thin, bearded, conspiratorial-looking man in an ankle-length overcoat is Jonathan Clowes, LD's literary agent. Next to him is Tom Maschler, enfant terrible of Jonathan Cape's, who publish both Len Deighton and James Bond, and on the far side a partner from Callis Felton, LD's chartered accountants. Coming and going are LD's lawyers and his Press agent. The talk is mostly about contracts and words like 'reversion' and 'assignments' are sprinkled liberally across the table.

Although it's all done with much laughter and backchat one has the impression that they all know exactly what they are doing. For the first time one begins to wonder whether LD's disorganised ingenuity isn't the wrapping around and incisive mind.

'I like the red end-papers on Horse' LD says to Tom Maschler, 'and with Ray's dust-jacket it's going to look even better than Ipcress.'

The next thriller is called Horse Under Water and this is abbreviated to Horse among the group. Its success is an important part of their future plans.

It is interesting to note that, after having published only one book, Deighton was clearly a significant literary figure and potential gold mine for the publishers Jonathan Cape, judging by the group eating lunch.


The lunch is eaten and the management has offered us a brandy on the house. LD has drunk very little during the lunch and now he gives us all a little lecture about drinking and driving. We all nod sagely and drink our brandy since everyone else has come by cab.


Next to the jellied eel stall in Cambridge Circus LD is searching through a mass of old battered books spread across a stall upon which there are old decanters, postcards of Marie Lloyd and moustache cups. He finds two books he likes and buys them.

'An old friend of mine runs this stall. He saves me books on military history.'

I've no idea what a 'moustache up' is! Working near to Cambridge Circus, I can confirm these - and jellied eels - are no longer available for sale in the area.

More from this fascinating article in a future blog post.
Posted by Deighton Dossier at Saturday, March 13, 2010