I've been advised by Deighton's biographer and friend Edward Milward-Oliver of the sad passing of graphic artist and author Raymond Hawkey. A friend and fellow art school graduate of Len Deighton, Hawkey was one of the pioneers of graphic illustration in the UK in the sixties - particularly in book cover design - and will be best remembered for his iconic front covers for Deighton's first four novels - The Ipcress File, Horse Under Water, Funeral in Berlin and Billion-Dollar Brain. All four of these were landmarks in the development of dust cover design, particularly because of Hawkey's use of large amounts of white space and black and white photography at a time when book covers were still largely in colour and illustrated. Hawkey had a long working relationship with Deighton and provided the covers and associated marketing material for many other of his works.

Further immediate thoughts on the death of Raymond Hawkey, announced today. Hawkey was part of that band of design pioneers from the 1950s who revolutionised British art and design, along with Deighton and the pop artist Peter Blake, and draw on influences in the latest in American design and consumer pop culture into the - at times - staid world of British design. For example, Hawkey pioneered the use of photography in the Royal College of Art's Ark publication - and in the same way, he pioneered the use of photography in the covers of Deighton's most famous works.

Up to that point, most British books did not use photography to illustrate the themes inside. He and his contemporaries recognised the power of photography and the validity of commercial art - Deighton, of course, was for a while a commercial artist designing book covers for Arnold Deutsch and Penguin. Hawkey subsequently developed his graphical approach to media on the Daily Express and The Observer, and played an influential role in introducing to the newspaper reading public Deighton's first cook-strips, which subsequently were transformed - with Hawkey's help - into the famous Action Cook Book and Ou est le Garlic. The start of a long-established working relationship and friendship between the two artists which lasted over fifty years.

The transition between the book covers they designed in the 'fifties, and the startling impact of the Ipcress File cover in the early '60s was definitely a sea change in the way publishing companies used cover images to pull in the reader.

Here's Len Deighton on one way in which his pal Raymond Hawkey's helped shaped the publicity and branding which helped propel Deighton's SS-GB to the top of the bestseller lists:

"For SS-GB, with Tony's encouragement, Ray produced a book of British stamps complete with Hitler's head that stamp collectors cherish. He also had the photographer Adrian Flowers make a photo of Whitehall that could be exactly matched with a parade in Berlin to make a fake postcard of Hitler in London taking the salute of a march past."

I have a set of those stamps which I cherish, and the attention to detail and authenticity which marks much of Hawkey's work is evident. One is reproduced below alongside the real thing. 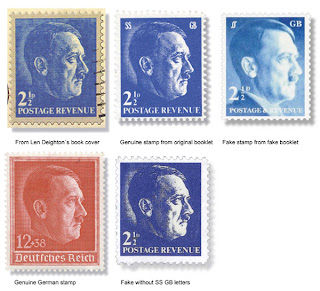 My favourite Hawkey covers are actually the three apple and knife motif designs on Berlin Game, Mexico Set and London Match - really captured the image of decay and betrayal at the heart of the secret service. Wonderful stuff.

I had also recently obtained a copy of Raymond Hawkey's thriller Side-Effect, about the unexpected consequences of gene research. He was encouraged to write by Deighton.

As Jeremy Duns has pointed out, Hawkey was also the designer of the famous Pan editions of the Fleming bond novels in paperback, designs which the Financial Times described as having a "a stark elegance... consistently menacing and memorable. Each has a single photographic image on a plain or textured background. Blurb is dispensed with. It’s the visual equivalent of a cruel, sardonic smile."

Below are a few more images of some of Hawkey's Deighton covers. Enjoy. I will on the blog and the Deighton Dossier website at some point soon do a fuller appreciation of Raymond Hawkey's work.