The Defector by Daniel Silva - review 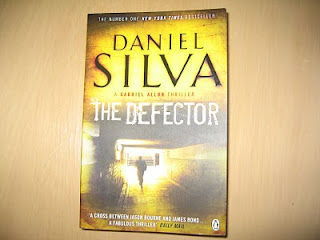 The Defector - published in 2009 and now out in paperback - is the ninth in the Gabriel Allon series and has recently been followed by the US No. 1 bestseller The Rembrandt Affair. I hadn't read any of Silva's works before so I wasn't sure if, coming into this series of novels without having read the others, I might miss something in the development of the main character, Gabriel Allon. It wasn't a problem: Silva provides enough frequent references to Silva's past to allow a reader to gain satisfaction from the story without having read the other novels.

Who is Gabriel Allon? He's a former assassin for the Israeli secret service, responsible for killing six of the 12 members of Black September in Munich in '72. kidnapping and killing the Israeli athletes. Allon is the bright star of the Israeli secret service, an assassin of impeccable skills who operates under deep cover as an art restorer trained under Umberto Conti in Venice. His first wife is maimed by terrorists, who took his son's life. With such a back story, Allon is a character driven by revenge on his - and his country's enemies - but righteous revenge. As a main character an assassin isn't the obvious choice for a believable lead character with which one might emphathise or will to succeed. He kills for a living. Period.

And believe me, there's an awful lot of killing in this book. It's generally handled with taste and sensitivity but - given the main character's job - is also unavoidable and a steady body count is wracked up chapter-by-chapter and sometimes you feel it's all too easy. Allon sometimes is shown to question his job and these killings, but at no point is the idea of state-sponsored assassination questioned; it is just accepted that that is what Israel does. Silva writes well in the sections where Allon is wracked with guilt - an assassin with a conscience - and needs the constant support of the ageing boss of the agency to remember the moral code by which the Israeli secret service operates: the maxim from Exodus - "an eye for an eye". But sometimes the dialogue between the main characters was a little by-numbers and lacked panache and wit. Yet it flows along well and while the dialogue may not grab you, the pace of the story telling takes you by the scruff of the neck and delivers a good pace. Silva's very efficient at spinning the yarn, adding in twists and taking the reader on a believable story arc that has a gruesome but not altogether predictable ending.

The plot to The Defector isn't hugely original - it's a classic Bourne-style global chase after a cunning and ruthless enemy, in this case billionaire oligarch Ivan Kharkov who, in the traditions of such thrillers, is a thoroughly nasty piece of work whose networks of businesses, associates and criminal connections stretches across the globe, right up into the Kremlin. That said, it works pretty well. The technical aspects of modern espionage are given a good airing but don't at any point become overly technical in a way that may interrupt the story telling.

Kharkov is close the Kremlin, and that gives him leeway. A ruthless crime boss who trusts no one and who seemingly lacks any moral compass, he is out for revenge against Russians like Grigori Bulganov - the defector of the title - whom he believes betrayed him. Allon was involved in Bulganov's defection and the subsequent separation of Kharkov from his wife Elena and their children, who now live in the US under CIA protection. Understandably perhaps, Kharkov wants revenge on them both and uses a classic bait and switch to kidnap Bulganov and - subsequently - Allon's partner Chiara. So, we're then faced with a classic kidnap plot and raise against time to free the captives from a certain death and bring down the criminal overlord operating with Kremlin connivance. So far, so Bourne, perhaps?

Tbe plot lacks a little originality and the characterisation was at points a little too cardboard cut-out for me; representatives of the US and UK secret services drop into the action at required points, but they add little and serve merely as plot devices it felt to me; one is not given the time to understand for example more of the relationship between the US, UK and Israelis. Plus, it is reasonably difficult to sympathise and empathise with an assassin as lead character.

But, that said, it's an easy read and Silva's interesting take on the classic spy story trope - by seeing the moral centre of the story through Israeli eyes - gives it a contemporary feel in light of all that has gone on - and continues to happen - in the only real democracy in the Middle East which constantly fights for its survival in a game with few rules and plenty of moral ambiguities. The art restoring cover story is a nice touch which gives the author a USP for the character and a plot framework, but it doesn't I feel explain much about the character - Allon could easily be an assassin under cover as a plumber or tax accountant, it is his day job which shapes the story and provides the colour.

The mise en scene is primarily Russia and the capital of the diaspora, London. As a former CNN journalist, Silva is in his depiction of modern Russia drawing a vivid picture that many international watchers will recognise: capitalism gone awry, widespread corruption, the Kremlin's enemies scattered across the globe and the SRV, the Russian secret service, still running plays from the KGB's playbook. He does present well the ruthlessness that haunts modern Russia and the inextricable ties between Putin's Russian and Stalin's Soviet Union (the denouement of the story plays out in a dacha linked to the purges of the late 'thirties). So, the settings and the descriptions of Russia work well for me.

An assassin with a conscience - it works well enough and there's plenty here in this novel to inspire and engage the fan of modern spy fiction who's looking for a different take on the modern spy thriller. I got enough reading pleasure from this book to make me look forward to The Rembrandt Affair. It's out now in Penguin books priced £7.99.

But next on my reading list - the second Paul Dark story, Jeremy Duns' Free Country, which will be reviewed here.
Posted by Deighton Dossier at Monday, August 09, 2010

Email ThisBlogThis!Share to TwitterShare to FacebookShare to Pinterest
Labels: reviews