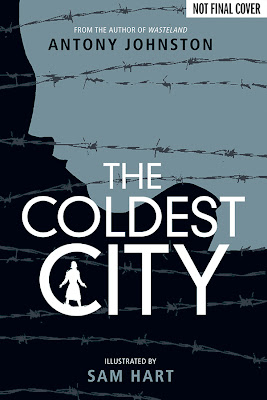 Johnston's lead character is British secret agent Lorraine Broughton, and it's great to see a spy story with such a strong, multi-layered female character carrying the story. Her presence reflects the changing world, when old certainties and social conventions in the workplace were disappearing; spying, too, is no longer the elite, male world of Bond and Palmer.

New to Berlin, Broughton is asked to infiltrate the city amidst the chaos right before the fall of the Iron Curtain. A fellow officer has been killed in West Berlin while carrying a list containing the names of every covert officer, from every intelligence agency, operating within the city. This sensitive data is now missing, and MI6 doesn’t know who to trust. Broughton is challenged to find it before the killer can put it to use.

Agents on both sides are coming to terms with the fact their worlds are falling apart. The fall of the Wall means they must do a certain amount of 'housekeeping' in order to keep safe their secrets - the currency of international espionage - and protect their hidden sources. Against this backdrop, Broughton's efforts to hunt down the list bring her into contact with numerous dangers, as agents from all sides stop at nothing to get hold of the information she's after. One such is Lasalle, from the French security agency; they get close, end up in bed, but this is no ordinary Berlin fling - the first time they're in bed together, Broughton senses he's not who he says he is and pulls a gun on him. Operating alone in a strange city, Broughton has to live by her wits and use the chaos caused by the collapse of the East German regime to her advantage.

Told from the perspective of a post-operation debrief by her superiors, the tale Broughton recounts has all the classic elements you want from a spy novel: fake passports, assassins ("Icemen"), risky crossing of the Wall, clandestine meetings, mis-direction and more twists than a bag of pretzels. Crucially, it has a fantastic denouement that I certainly didn't see coming and which provides a really satisfying finish to a great story.

The use of the graphic novel format really adds something to the story and is a great way to refresh the genre and keep it relevant for contemporary readers. Sam Hart's drawings - uncomplicated, with sparse sketching, frequent close-ups, multiple panels with no dialogue have a cinematic quality - they read like a story board - and give the reader space in which to construct their own visual narrative. The reader is drawn into this city in tumult, and the numerous small visual clues provide unwritten signposts that move the plot along.

Johnston reminds modern readers that the physical reality of a divided Europe was matched by divisions in the mind of those charged with protecting their countries' interests.

Nothing in a divided Berlin was ever quite what is seemed. The Coldest City uses that fact to perfection and can take its place alongside Funeral in Berlin, Absolute Friends and Zoo Station in the file marked 'classic Berlin espionage fiction.' A cracking thriller that you want to read in one sitting, such is the mix of tension and uncertainty in every frame.

The Coldest City is the first in a planned line of spy thrillers from Johnston, but the latest in a long line of prestigious graphic novels from Oni Press. It's out in May 2012 in hard cover. Deighton Dossier readers can find more at The Coldest City website, which has sample scenes from the book.