Ark was a very public manifestation of this new movement, in which the latest techniques were used and existing conventions challenged. Ark was also a siphon, drawing across the Atlantic the latest design and graphical trends from America like 'jazz modernism' and 'streamlining'. Len Deighton was an enthusiastic contributor and editor. Seago describes Deighton's article on Soho - titled 'Down Past Compton on Frith, Food Makes Wonderful Music' - as "the most skilfully written article every to appear in Ark". Here's an extract from the feature 'Abroad in London' in Ark No 10 from 1954, which is a fantastic evocation of the Soho of the mid-fifties, then becoming the centre of everything hip and trendy in the capital, with jazz clubs and the ever present seediness of the demimonde not far away. Here's an excerpt:


"Gashed across the face of London's West End, Old Compton Street, the High Street of London's largest foreign section, is constantly busy with the hustle of day, evening and night. Dribbling across newly swept pavements, ice blocks rest outside restaurant and shops by 8.30am. A rambling monster lumbers slowly along clanging its sanitary progress - the Westminster Council dustcart is one of the few English intrusions. A thousand empty bottles - dusty and vintage laden the previous evening - join garbage and broken furniture in a jostling to the incinerator .... Chairs are swept under as lunch menus are written."

You could almost be there, sitting outside Bar Italia in Frith Street enjoying an exotic new 'cappuccino' coffee as you watched the world go by! The prose is accompanied by some wonderfully evocative illustrations by Deighton which capture the vibrancy and early growing pains of 'swinging' Soho - a London which Deighton drew on for his early steps writing fiction. (click on each photo to see in more detail). 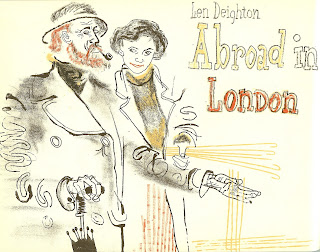 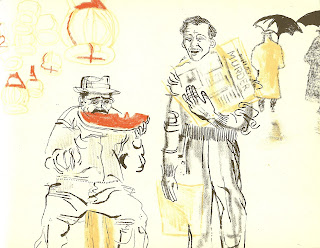 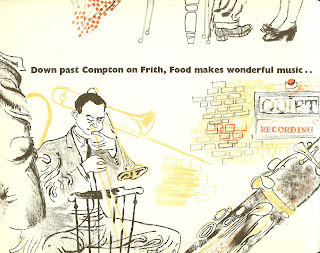 The second set of illustrations is also from Ark, edition 13 from 1955, and follow a similar format, only this time Deighton is stretching his journalistic and artistic muscles by penning a portrait New York's metropolis, where Deighton worked for a while in advertising and in restaurants. 'A bowler hat on Broadway' is Deighton's own taken on an Englishman in New York, and captures an America of jazz bars, ice cream floats, donuts and neon. 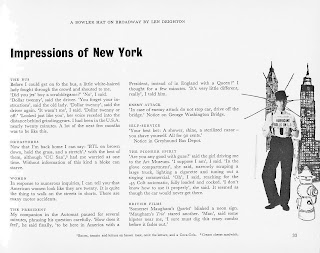 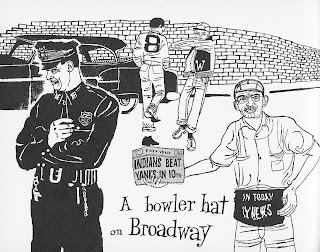 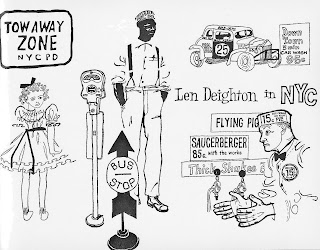