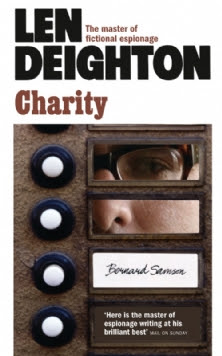 After nine books (if you exclude Winter), with Charity Len Deighton brought the curtain down on - according to The Times - "one of the great literary achievements of British fiction." Having dealt in the first trilogy with the knowledge that his wife is a defector, only to discover in the second trilogy that Fiona's defection was in fact the greatest infiltration success of London Central and he was the crucial - unwitting - pawn in this most elaborate of espionage chess games, Charity rounds of the Samson story.

Bernard is still working for Frank Harrington in Berlin but increasingly caught up in the machinations of his brother-in-law George Kosinzki who is supporting the growing Catholic church movement in Communist Poland. Samson is increasingly anxious to find the truth about the defection of his wife and the death of her sister during the mission to exfiltrate her. A meeting with a former colleague, Jim Prettyman, reveals that he was responsible for hiring the hit man who killed Tessa, Fiona's sister. What is worse, Bernard realises there is no future for him and girlfriend Gloria, who is now carving a career for herself in London Central and sharing a bed with Bret Rensellaer.

Bret holds an inquiry in to Tessa's murder which uncovers that Silas was solely responsible for Tessa's death, and had gone to great, murderous lengths to keep the operation secret by trying to murder various of Bernard's contacts and friends who'd been forced to become involved. Betrayed by the department that now seeks to repay his loyalty, Bernard asks Fiona and their children to join him in Berlin, his true home.

The new introduction
What's most interesting in this new introduction is that Len explains his "obsession" with Berlin, which I've always maintained is one of the central 'characters' in the books, because the city and its inhabitants is so wonderfully described that the reader totally understand the mixed feelings Bernard has about the city and its people. That sentiment too is understood by Deighton:

"Berlin is like an ever-present character in my Bernard Samson books. It hovers over the action like a storm cloud even when the action moves to a different locale. But Berlin has no speaking part. It is the action and the inter-action that must always dominate stories of the type that I write. Berlin is the backdrop but the people who strut and posture on the stage together create a mood of drama, farce, horror or knockabout horror that must be maintained through all the stories. When I wrote Winter, a story of Berlin the first half of the twentieth century, and the prelude to the Bernard Samson stories, the ghosts danced in my head.

As a historian, Deighton tells the reader that he has had a fascination for all things German for many decades, and displays his grasp of the strategic imperatives which drove the development of Berlin - and Germany - from peasant economy to economic powerhouse in just over a century and a half. Across three pages, Deighton displays his knowledge of Berlin's history to explain its role in the ups - and many downs - of German culture from the Kaiser time right up to the fall of the Wall. Berlin is a city of contradictions - cultural centre drawing in people from all across central Europe, yet one which is dominated by the German army, to the extent that in the nineteenth century revenues from one particular toll gate went straight to the German army. Makes for fascinating reading for anyone interested in understanding the dynamics that have created this most tumultuous of cultures.

There is an interesting part of the introduction in which Deighton seeks to respond to critics' descriptions of the novels and their classification as spy thriller. Despite his apparent Prophet status in understanding the structure forces that eventually brought down the wall - the Catholic and Lutheran churches - and reflecting them in the heart of his novel, Deighton insists the stories are not political thrillers. They are, Len insists, comedy dramas about love and marriage, of a man with two women in his life.

The new cover
The spine motif - torn up plane tickets spelling out BERNARD SAMSON - is complete with this book, and the total effect when all nine books are place side to side is very pleasing. Arnold Schwartzman explains the front cover image - of Samson's image behind a push-bell directory - is to suggest Samson as the 'third man' of the story, an unreliable narrator; it also suggests the third book, of the third charity. The best image is on the back: a Russian ashtray on which lies a lit cigarette with lipstick, hinting at Fiona's central role in this whole drama.

The quality of thinking that has gone into all nine of the covers of this triple trilogy is immense, and I think that Schwartzman's design deserve consideration alongside Ray Hawkey's original covers for the trilogy.