14 foot tool. 96 miles long around West Berlin, with 302 watchtowers, the wall kept in a population in the East that at times was haemorrhaging 3,000 people a day to the West in search of a better life. The socialist East Germany was, as many a reader of spy fiction will know, not exactly an idyll.

In spy fiction and in spy movies, the Wall has provided one of the greatest of dramatic backdrops. It's been tunnelled under; crossed by foot (under cover of darkness), smashed through, crossed by improvised plane or balloon, driven through with hidden passengers, and been the source of swaps of the human currency of espionage - captured agents.
Visually and in the written word it represents danger, secrecy, ‘the other side’ – ‘druben’, as Berliner’s would say - a metaphor for the meeting of the nuclear colossi of the US and the Soviet Union and the impasse of the Cold War. The Wall was rigid. Impermeable. It looked like it would last. It had the permanency and heft of a prison wall.
It was certainly a prison for those in the East. For those in West Berlin, it was too, to an extent. They were isolated, surrounded by the wall on all sides and only able to access their compatriots in the West along an air corridor and three motorways. And when those motorways were blocked - as had happened in 1948 - the precariousness of their situation was evident.
Security needs trumped all sense or rationality or order. The fascinating story on the BBC website of the town of Klein-Glieneke in West Berlin - almost completely enclosed by the Berlin Wall, with one road in an out - showed how the meeting of town boundaries and concrete security barrier often meted out cruel punishments on both sides.
But it had I think - accepting that this view would not be shared by those on the Eastern side - a certain beauty ... no, perhaps eery fascination as a result of its clean lines (until the graffiti artists had their way), jerky sense of direction and visual impact on the city.
Funeral in Berlin, of course, captured the essence and absurdity of the Wall well, with the calm, quiet ceremony of the exchange signalling one of the many brief, temporary thaws in a 29 year period of deep freeze when Soviets and Allies exchanged their own. Plenty of other movies have featured the Berlin Wall as a backdrop, of course. 1965's The Spy Who Came in from the Cold with Richard Burton; Billy Wilder's One, Two, Three; Wings of Desire by Wim Wenders; 2003's sleeper hit Goodbye Lenin (my personal favourite) among others.

When reading any of Len Deighton’s novels espionage novels – in particular the Bernard Samson triple trilogy – the Berlin Wall – along with the city itself has always for me been almost an addiditional character, so impactful was its presence on the protagonists and on the possibilities it offers for the story's development as the Wall challenges, separates, kills, confuses and hardens the should. It is a marvellous metaphor for the author - the Wall is a physical metaphor for Bernard's marriage, the two lives he leads: agent/husband, Fiona/Gloria, Bernard/Stinnes, Freedom/Death. 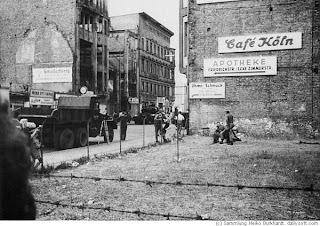 Deighton's colourful and rich descriptions of the Wall and the procedures adopted by the Stasi to ensure it worked - pretty much all the time - suggested here was a writer who'd not just seen the plans and read the staff briefings, but spent many an evening in the Kneipe asking one of the guards to tell just one more story about the Wall's shortcomings.
Take this description from Berlin Game, when the looming presence of the Wall throughout this novel, the commitment of its creators and managers and its crucial role in the lives of the characters we meet over succeeding chapters first appear:

"This side of Checkpoint Charlie had not changed. There never was much there; just one small hut and some signs warning you about leaving the Western Sector. But the East German side had grown far more elaborate. Walls and fences, gates and barriers, endless white lines to mark out the traffic lanes. Most recently they'd build a huge walled compound where the tourist buses were searched and tapped, and scrutinised by gloomy men who pushed wheeled mirrors under every vehicle lest one of their fellow-countrymen was clinging there.

The checkpoint is never silent. The great concentration of lights that illuminate the East German side produces a steady hum like a field of insects on a hot summer's day.  [ ] Beyond the silhouette of Checkpoint Charlie, Friedrichstrasse in the East shone as bright as day."

Indeed, this first chapter, with remembrances of Bernard and Werner's lives as kids in Berlin when the Wall went up, and their doubts about its permanence, provides an means of setting the story in a rich historical context.

There are a number of excellent books I’ve read on the Berlin Wall – its construction, its role in the Cold War, the view from the East. Two I'd encourage blog readers to check out: After the Berlin Wall by Christopher Hilton, uses personal perspectives of residents to understand the impact of the Wall on Germany as nation, as it tried to unify, and The Berlin Wall by Frederick Taylor, is a wonderful exposition on the political and military context behind the decision to build the Wall.
Over twenty years after it fell - to be more precise, was opened by desperate Berliners - it is still so fresh in the memory even if its physical evidence is now long gone.

Berlin is united, but still, depending on who you talk to, divided. It works collectively, but has distinct characters still on either side. The two halves of the city are like two hemispheres of the brain. The Wall had incredible impacts on the minds certainly of individuals and families, as highlighted in these accounts in The Guardian.

The Wall - symbolically and materially - impacted the lives of everyone on the globe, from the residents of Wedding to the Bomber pilots stationed on Guam. Like a hair trigger, any breach of the Wall - any allied attempt to bring it down directly - would be a prelude to nuclear war. Other means would need to be found, and therein lay the basis for many great stories by a number of authors while the Wall stood.
Whenever the Berlin Wall appears on screen, for a moment I wistfully wallow in what memories it creates for me: my childhood; my frequent visits to the city; the great stories I've read set around the Wall. But it also forces me to imagine what life must have been like for the people living behind the wall, their horizons dominated by the drab grey concrete, watchtowers and the ever-present security lighting.

It was an awful experience for East Germans, but perhaps an inevitable consequence of the way the Allies were frozen in opposition to each other when the music stopped after World War Two. As Kennedy said when it was built: