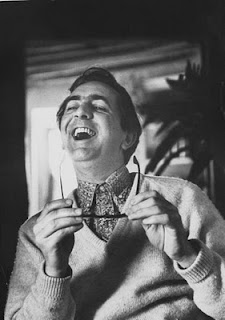 Part three of the reproduction in full of a fascinating article looking at Len Deighton's life in sixties' London by way of a detailed diarised account of a single day spent with him. You can find part one and part two elsewhere in recent blog posts.


We are back at LD's flat, having called into the Imperial War Museum on route to make a sketch of a photograph of a type of XXI u-boat. He goes into the workroom and sorts through a pile of newly arrived magazines. There is What's On, Soldier, RAF Review, Admiralty News Summary, British Model Soldiers Society Bulletin and China Reconstructs. 'I should take the Daily Worker, really,' he says.

'Because if you write spy books you are writing about politics - you've got to spend a little time reading everyone's point of view. If I write dialogue spoken by a Communist it must be real, accurate and convincing, not a crude parody of mustachioed villainy. We are all far beyond that now. I hope we are anyway.'


LD has explained how the next section of the book he is writing depends upon a certain amount of ww2 research. 'This character is a very old man, a Nazi general...'

'You always seem to have Nazi generals in your books,' I say.

LD grins. 'That's a bit unfair. But I do use the characters as symbols, I know. But once I have chosen them I try to make them as realistic as possible. I don't make them speak or act as symbols but the initial choice is symbolic.

Anyway, I have this old guy who is a Nazi general. I'll need some research.'

We go into the next room. Dominating it is a big brass double bed. Under the bed there are box after box of newspaper clippings filed under names like 'Travel', 'Transport' and 'Crime'. A lot of the cuttings consist only of photographs. 'A lot of my reference is just visual,' he says.

I admire the brass bed. 'My uncle Wal has a junk shop at Clapham Junction,' he says. 'He gets us things.'

The far end of the bedroom is a mass of bookshelves and potted plants. 'Wonderful plants,' I say.

'My wife drew them for The Sunday Times colour supplement, but don't tell The Observer.'

'We finally got so used to having them here - my wife works very slowly - that we paid for them and kept them.' He dives head first into this great long-barrow of printed paper and for two hours he quietly makes notes in tiny, neurotic handwriting. He shows me the notes he has prepared for a book on military history. 'Seven years' work there,' he says, 'perhaps half a million words.'

It's not clear which this work is referring to, but it could well be the early parts of Blitzkrieg, his history of the German military victories of 1939-41.


From the kitchen there is the steady tinkle of work as Mrs Deighton, who has supplied large cups of strong coffee all day, prepares the evening meal. I ask how much cooking LD does. 'It varies,' he says. 'We don't have any system.' I can quite believe it.


Guests begin to arrive. 'There will be quite a crowd,' LD says. I can quite believe that, too, for he has asked to super almost everyone we have met all day. In the living-room there is a big coal fire and the guests help themselves to a drink. LD acts rather like one of the guests; he makes no attempt to take anyone's coat or pour them a drink, but it all seems to work out very well since the visitors know where everything is.


The guests are still arriving, but LD is sitting in the workroom behind his electric typewriter. One of the guests - an advertising man - puts his head round the door. 'Are you working or watching No Hiding Place!' he asks. The TV set has been operating since Tonight came on the air.

LD says, 'Both, and what's more I'm recording a string quartet at the same time.' I look toward the tape-recorder and find he is doing exactly that.


We are sitting round two ramshackle card-tables being served with a clear beef soup, roast beef broccoli, a vast cheese board, fresh peach and brandy soufflé with brandy and cigars to finish.


The conversation is about narcotic-taking. LD says it is like pulling the bedclothes over your head and refusing to get up.

'Don't you ever pull the bedclothes over your head and refuse to get up?' someone asks him.

'Nearly all the time,' he says with a giggle.

The conversation is about advertising, food, travel and art, in which most of the fourteen people there are well versed. There is surprisingly little talk of houses or motor cars. As most of the guests have to go to work by next morning, they have all left by 2.10 am. LD goes back into the workroom and shifts a very fat tortoiseshell cat out of his chair in order to sit down at the typewriter. He flips the switch on the tape-recorder and the sound of a Brahms string quartet floats gently across the room. LD reads through the stuff he has written that day. He takes a pair of wallpaper scissors and snips it to pieces then begins to build it together again with Copydex.

'Yes,' I say. Outside the milk lorries roar past, chinking a clattering over the uneven roadway.


He phones Aircall (his car phone service) and asks if there are any messages. The operate says there is a man who wants to sell him some information about confidence tricks, and will be in Central London tomorrow. He'll phone in at midday. LD says okay and hangs up. 'For some reason the people who want to sell you stories never have much to say - it's the ones who are prepared to tell you for nothing that really make you hair curl. I'm doing a screenplay about confidence men you see. Weird mob.'

This is a reference to his development of the story of Only When I Larf, which he developed simultaneously as a film script which he subsequently produced as a film - one of only two he ever produced (the other was Oh! What a Lovely War) before throwing in the towel on the producing game.


LD wanders into the hall and picks up a yoghurt from the floor. He opens the cap and eats it with a tiny spoon. 'I think I'll have to go to bed now,' he says. 'Have you got all the copy you need?'

A fascinating article which paints a terrifically vivid picture of life in London in the sixties which acted as the seedbed for many of Deighton's early novels and greatest characters.
Posted by Deighton Dossier at Friday, April 02, 2010