The Londonist on Deighton 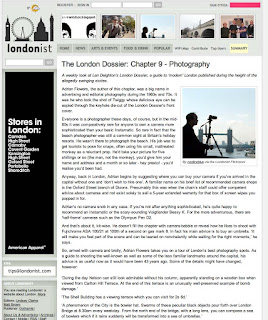 I've been remiss on not posting about a series of weekly blogs by the great little website The Londonist, which is a quirky but very popular site about London in all its varied glory.

The people behind the blog describe themselves thus:


"Londonist is a website about London and everything that happens in it. That means news, reviews and events; the history and future of London. We celebrate the quirks, eccentricities, hidden and surprising bits that make up the alternative side of the city.

Upbeat and eclectic, Londonist is created by an incredibly talented and diverse team of contributors who share a passion for the city with our readers. We're a bunch of London obsessives who live the city and share our best discoveries".

Over the last eight weeks, Kevin Mills has been summarising chapters from Len Deighton's classic from the 'sixties, Len Deighton's London Dossier, which painted one of the most accurate pictures of London in all its swinging glory, a city which, sadly, is now much of a memory but which comes alive again through Deighton's writing and that of his London pals at the time, each of whom writes about a different aspect of London: food, travel, photography, children's London, slang and shopping and many other topics.

Kevin uses each of the chapters from the book to juxtapose Deighton's London with the modern version - it's an interesting little series which sums up the website's approach to this great city of ours. Last week's blog looks at chapter 8 of the book - children. The chapter in the original books was written by Drusilla Beyfus, and records a different London when kids could play on the streets happily and be satisfied with an ice cream at the end of a visit to the capital's museums. Here's a sample from the Deighton book:


"Whatever a child's hobby or interest, the chances are that London has a densely variegated supply of items which bring a sense of treasure tracked down. This is as true of stamps and butterflies as of conjuring tricks, false noses, fireworks, camping equipment, Batman gear, model soldiers, trains, cars and boats. British soft toys for babies and nursery use are imaginatively designed and made in long-lasting luxurious materials. Bicycles, scooters, tricycles and dolls' prams are usually good value. A recent improvement has been in the range and quality of cheap playthings. Hamley's of Regent Street and Selfridge's of Oxford Street have a good stock of cheap toys that work. The games counters include the best from abroad and it is possible to see the world's latest diversions and distractions that come packed flat in a box."

Not a PlayStation in sight!

A link at the bottom of the page lets you explore the first seven chapters. This week's blog post (pictured) - chapter nine - looks at London through the eyes of the photographer. In the original book, this chapter was written by Adrian Flowers.


This could run and run. There are thirty-three chapters in the original book. Worth checking out.
Posted by Deighton Dossier at Wednesday, April 14, 2010

Email ThisBlogThis!Share to TwitterShare to FacebookShare to Pinterest
Labels: London