Tales of Dutch derring do 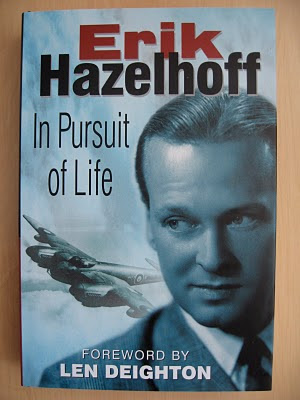 With Len Deighton in semi-retirement and off the radar screens of the media and increasing numbers of book readers - sadly -  for fans of his writing there's precious little new out there to read and enjoy. In recent years, one of the ways Deighton has contributed by way of the literary world is through providing forwards to a number of books on topics close to his heart: military history. Over time, I've been hunting down more and more of these.

One such example I found over the Christmas period is In Pursuit of Life by dutchman Erik Hazelhoff Roelfzema, of whom I knew nothing until I picked up the first edition of this, his autobiography. I'm glad I did - he is evidently one of those characters from the wartime period (who sadly died in 2007) who combined a numerous careers and lives in one lifetime and undertook feats of courage and audacity which nowadays are unthinkable. He also personifies the bravery and cunning of the wartime military agents (particularly from the occupied countries) who risked everything to free Europe from tyranny of both kinds.

In many ways his story brings to mind to that of Merlin Minshall, a friend of Deighton's whose biography Guilt-Edged was published in the seventies and to which Deighton also provided the forward. Minshall was spy, adventurer, businessman, bon viveur, cad, Englishman, and he had a great story to tell. (A former colleague of Ian Fleming's in naval intelligence, Minshall was often cited as an inspiration for the James Bond character).

Hazelhoff too has some story to convey. Born in 1917 in Dutch colonial Java, during the second World War he was a soldier and freedom fighter who, after fighting in the Russo-Finnish war in the winter of 1939, found himself in London with the Dutch elite. In London, Hazelhoff and the General François van 't Sant, director of the Dutch CID (Central Intelligence Service) and Col. Euan Rabagliatti (of the UK's Secret Intelligence Service) set up a secret agent group known as The Mews, after Chester Square Mews where they lived in London. This group sought to connect with the Dutch resistance and prepare the ground for Dutch liberation; but MI6's networks in the Netherlands were pretty much broken by the Nazis and Hazelhoff escaped back to England. Later in the war he served with the RAF's elite Pathfinder Force and received the Dutch equivalent of the Victoria Cross before becoming an aide to Queen Wilhelmina and flying her back into liberated Holland.

His adventures in occupied Holland were subsequently filmed by Dutch film director Paul Verhoeven (who recently made the excellent Black Book). He turned Hazelhoff's war memoirs Soldaat van Oranje into the film Soldier of Orange, which starred Rutger Hauer as the character based on Hazelhoff and follows closely the exploits of The Mews. This is a title I've now added to my list of 'must see films'. It was, apparently, voted the second best Dutch film of all time.

The life he'd let up to that point achieved more than most men achieve but through reading his story it's clear that this was just the prelude to more achievement and success for Hazelhoff. Moving to the US after the war he was a writer and co-creator of NBC's Tonight show; in the fifties he became a director of Radio Free Europe working with the CIA. He was even at one point a tramp on the streets of New York!

Hazelhoff's writing is excellent, his story telling precise and rich in form and colour. He is a fascinating character, part of a breed of gentleman spy and adventurer for whom risk, danger and variety were the ingredients of a fulfilled life.

In his foreword to the book, Deighton highlights the qualities of a man who had lived "a hundred lives":

"Nothing stops him, whether it's a ticking bureaucrat or a ticking time-bomb. Erik the amateur pilot flying countless missions over wartime Germany or the short-sighted applicant surviving countless physical examinations in order to join the RAF's most élite Pathfinder Force. Equally gripping is Erik's postwar encounter with an American employment agency, and his misadventures in the jungles of Hollywood. But he always emerges apparently unscathed: like a plastic duck plunging over Niagara falls he surfaces and darts away to new waters.


"For if there is something enduring about him, it's the cheerful way in which he faces every trial. And his optimism is well founded. When someone asks him for a light it is likely to be a billionaire, when he shelters from bombs under a table he will meet a member of the royal family there. Penniless in Manhattan; hold on, here comes a school friend. There's no point in resenting his staggering good luck, it's just the way he is."

This book was a real find and adds another layer to my knowledge of the wartime intelligence fight in Europe.
Posted by Deighton Dossier at Saturday, January 09, 2010