The Sun is on the case...eventually 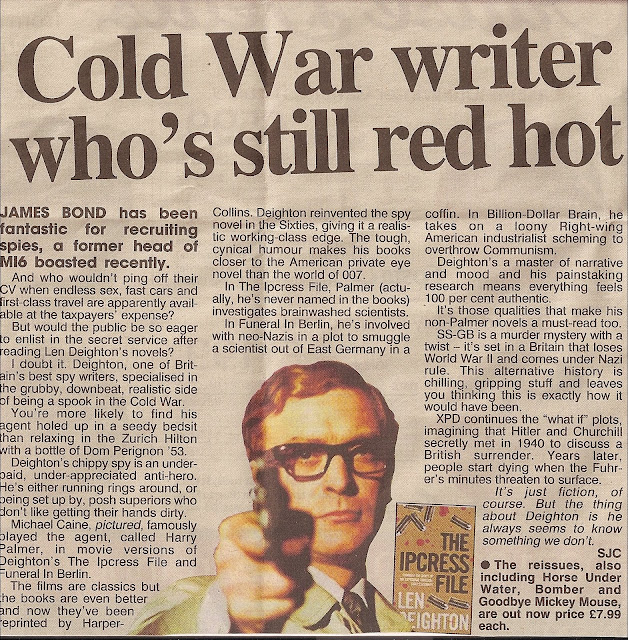 Good to see that Natasha Harding, the book editor of the The Sun newspaper, the UK's top tabloid, has finally caught up with the big Deighton news of 2009, namely the reissuing by Harper Collins of Deighton's first four spy novels plus four other of his best-selling novels.

In a feature entitled Cold War writer who's still red hot - in the Friday 15 January edition of The Sun, in its Something for the Weekend section  - one of her reviewers reflects on the reissued books and in particular the lead character of the first four novels, "Deighton's chippy spy...and under-paid, under-appreciated anti-hero." The films are classics, the reviewer writes, but the books are even better and have been reissued by Harper Collins (only seven months behind the news curve, but qudos to The Sun for picking up the story - perhaps the press release slipped down the side of the editor's desk!).

The review is actually very complimentary of all the eight reissued novels, in particular the Harry Palmer quartet, and does well in identifying the characteristics that make a Deighton novel what it is, without necessarily adding anything new in terms of textual analysis:

"Deighton reinvented the spy novel in the sixties, giving it a rough, working-class edge. The tough, cynical humour makes his books closer to the American private eye novel than the world of 007.


...Deighton's a master of narrative and mood and his painstaking research means everything feels 100 per cent authentic. It's those qualities that make his non-Palmer novels a must-read too... The thing about Deighton is, he always seem to know something we don't."

The last line a good summation of the narrative hook that has made Deighton a global best-selling writer. However, the review is slightly spoiled by the art desk using the front cover of the 1995 HC edition of The Ipcress File rather than featuring the new cover with the great new design by Arnold Schwartzman.

This review does not seem to be up on The Sun's website yet, however.
Posted by Deighton Dossier at Saturday, January 16, 2010