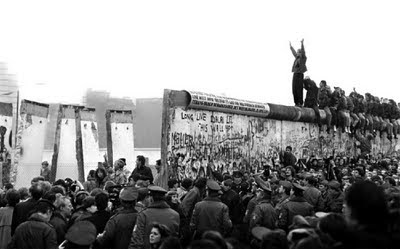 The more one reads about the history of the GDR and its huge security and espionage apparatus, the more one marvels at the manner of its demise: part people's revolution, part bureaucratic screw-up.

Twenty years ago today, GDR Politburo member Günter Schabowski gave his famous press conference in which he read out a statement concerning changes to the state law regarding travel outside the GDR for its citizens:

[Simple translation] "Private travel into foreign countries can be requested without conditions. Permission will be granted instantly. Permanent relocations can be done through all border checkpoints between the GDR into the FRG or Berlin (West)."

He jumped the gun, however, the commencement of the new travel law not being scheduled until the following day and the border guards and Stasi not in a state of readiness to deal with the consequences. Unsure of what the schedule was, he improvised. Never did an ad hoc decision - to advise the media the law was effective immediately - has such a stupendous effect on modern history. The law was in effect straightaway - "ab sofort".

This was an unprecedented change by the SED, and was clearly a major measure in response to the months of street demonstrations and meetings by citizens proclaiming "Wir sind das Volk (we are the people)." From a country that has spent the last twenty-nine years investing enormous sums of money in keeping its people in, to now hear proposals for a loosening of travel restrictions brought utter astonishment, not least to the journalists listening to Günter Schabowski's hasty press conference.

The people didn't hestitate for further clarification, and the system which upheld the Cold War was fatally flawed.

Sometimes, fact is definitely more dramatic than fiction. I'm not sure if any of the great spy fiction writers could have drafted such a dramatic denouement.

Reproduced below is the text of that press conference. It makes for fascinating reading:

Journalist's question: Mr. Schabowski, you spoke about mistakes. Don’t you believe that it was a big mistake to introduce this travel law several days ago?

Schabowski: No, I don’t believe so. We know about this tendency in the population, this need of the population, to travel or to leave the GDR. And we have ideas about what we have to bring about, all the things I mentioned before, or sought to mention in my response to the question from the TASS correspondent, namely a complex renewal of the society and thereby achieve that many of these elements... that people do not feel compelled to solve their personal problems in this way.

Those are quite a number of steps, as I said, and we can’t start them all at once. There are series of steps, and the chance, through expanding travel possibilities ... the chance, through legalizing exit and making it easier to leave, to free the people from a let us say psychological pressure... Many of these steps took place without adequate consideration. We know that through conversations, through the need to return to the GDR, through conversations with people who find themselves in an unbelievably complicated situation in the FRG because the FRG is having a great deal of trouble providing shelter for these refugees.

So, the absorptive capacity of the FRG is essentially exhausted. There are already more than, or less than provisional, that these people have to count on, if they are put up there. Shelter is the minimum for constructing an existence. Finding work is decisive, essential... and the necessary integration into the society, which cannot happen when one is living in a tent or an emergency shelter, or is hanging around unemployed.

So, we want... through a number of changes, including the travel law, to create the chance, the sovereign decision of the citizens to travel wherever they want. We are naturally concerned that the possibilities of this travel regulation—it is still not in effect, it’s only a draft.

A decision was made today, as far as I know [he looks toward Politburo colleagues Labs and Banaschak in hope of confirmation]. A recommendation from the Politburo was taken up that we take a passage from the [draft of] travel regulation and put it into effect, that, as it is called, for better or worse—that regulates permanent exit, leaving the Republic. Since we find it  unacceptable that this movement is taking place across the territory of an allied state, which is not an easy burden for that country to bear. Therefore, we have decided today to implement a regulation that allows every citizen of the German Democratic Republic (um) to (um) leave the GDR through any of the border crossings.

Schabowski: [... scratches his head] You see, comrades, I was informed today [puts on his glasses as he speaks further], that such an announcement had been distributed earlier today. You should actually have it already. So, [ reading very quickly from the paper]:

1) “Applications for travel abroad by private individuals can now be made without the previously existing requirements (of demonstrating a need to travel or proving familial relationships). The travel authorizations will be issued within a short time. Grounds for denial will only be applied in particular exceptional cases. The responsible departments of passport and registration control in the People’s Police district offices in the GDR are instructed to issue visas for permanent exit without delays and without presentation of the existing requirements for permanent exit.”

Question: With a passport?

Schabowski: [reads:] “Permanent exit is possible via all GDR border crossings to the FRG.112 These changes replace the temporary practice of issuing  authorisations through GDR consulates and permanent exit with a GDR personal identity card via third countries.”

[Looks up] I cannot answer the question about passports at this point. [Looks at Labs and Banaschak.] That is also a technical question. I don’t know, the passports have to ... so that everyone has a passport, they first have to be distributed. But we want to...

Banaschak: The substance of the announcement is decisive...

Question: When does it come into effect?

Beil: [quietly] That has to be decided by the Council of Ministers.

Question: [...Many voices...] You only said the FRG, is the regulation also valid for West Berlin?

Schabowski: [reading aloud quickly] “As the Press Office of the Ministry ... the Council of Ministers decided that until the Volkskammer implements a corresponding law, this transition regulation will be in effect.”

Question: Does this also apply for West Berlin? You only mentioned the FRG.

Schabowski: [shrugs his shoulders, frowns, looks at his papers] So ...[reads aloud]: “Permanent exit can take place via all border crossings from the GDR to the FRG and West Berlin, respectively.”

I’m expressing myself so carefully because I’m not up to date on this question, but just before I came over here I was given this information.

Question: Mr. Schabowski, what is going to happen to the Berlin Wall now?

Schabowski: It has been brought to my attention that it is 7:00 p.m.. That has to be the last question. Thank you for your understanding. What will happen to the Berlin Wall? Information has already been provided in connection with travel activities.  The issue of travel, the ability to cross the Wall from our side, ... hasn’t been answered yet and exclusively the question in the sense..., so this, I’ll put it this way, fortified state border of the GDR....We have always said that there have to be several other factors taken into consideration. And they deal with the complex of questions that Comrade Krenz, in his talk in the—addressed in view of the relations between the GDR and the FRG, in ditto light of the necessity of continuing the process of assuring peace with new initiatives.

And surely the debate about these questions will be positively influenced if the FRG and NATO also agree to and implement disarmament measures in a similar manner to that of the GDR and other socialist countries. Thank you very much."