Callan is no more... 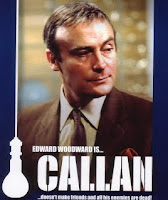 Sad to hear of the death of TV actor Edward Woodward at age 79. He was best remembered for The Whicker Man and as David Callan, secret agent and hitman performing assassinations for the UK secret service in Callan, first shown on ITV in the 1970s but repeated a number of times.

Apropos of nothing, my mother apparently sat next to Woodward in class when at school!
Posted by Deighton Dossier at Tuesday, November 17, 2009